Opinion. Landsbergis: are we brave enough to have a dream for Europe?

Gabrielius Landsbergis, Chair of the Homeland Union–Lithuanian Christian Democrat Political Group of the Seimas, Chairman of the Homeland Union–Lithuanian Christian Democrats,
DELFI EN
aA
In order to understand where we are going, let’s start on where we came from. For 40 000 years, the smart ape tried to prove to its mother that it should be the one to rule the world. And thanks to scientists like Yuval Noah Harari and Jared Diamond we now know that the ape has won, and what’s truly important, we know why. The Homo sapiens, driven by a dream of better conditions for life and moved forward by the ability to cooperate as a society, reached the twenty-first century. The sad part is that it apparently found itself without a grand question on what as a species, as a civilization are we going to do next. 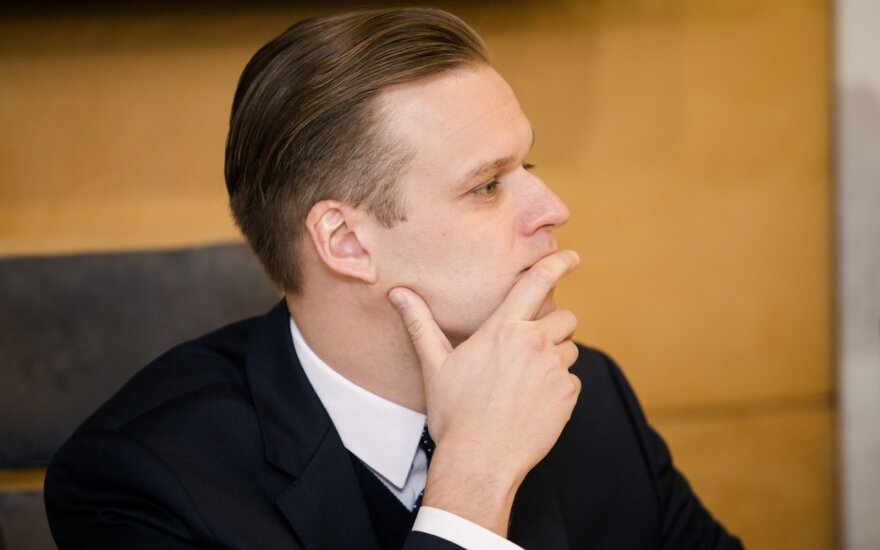 On the continent of Europe, we think we’ve seen it all. Wars. Peace. Religion making. Religion breaking. Countries rise and fall. We’ve got it covered. Sixty years ago we saw one of the most terrifying totalitarian regimes fall at the foot of the united forces of humanity that were fighting for our future. Even though back then it felt like the united world had won, it took fifty more years to complete the victory with the fall of the Berlin wall and Singing revolution of the Balts. „Whew…” - said the united world and sat down with a glass of whiskey and a good cigar (too bad not legally from Cuba). Francis Fukuyama drops a line that, guys, it’s all over. We’re set, no more war. We can be sure that we can roll back, buy a retreat in a multistore building in Playa del Sol in Spain and just relax.

Was it really the end of history?

Hold on to your towels and swimming shorts because somehow the world forgot to stop spinning and things kept happening, ignoring the promised end of history. Brexit is upon us and the Mexican wall is well… not yet being built. People in 1946 as in 1990 wanted the same things they want now, in 2019. Better lives for their children. A safe and secure future and a hope that it is sustainable. Yet is that really all? It feels as if we gained security and prosperity, but we lost the ability to set us on a greater journey. We lost the dream.

In Lithuania, we just celebrated 70 years of our second declaration of independence. The war in the heart of Europe was over, but not in the fields and forest of Lithuania, where tens of thousands of young Lithuanians where still fighting what the united world left unfought. But the dream of Europe was not lost. Eight leaders of resistance wrote and signed the declaration not in marble halls of some Senate, but in a small bunker, dug out in the middle of the rye field in the middle of Lithuania. The declaration itself was as a dream, one living solely in the minds of the freedom fighters. Even though the Soviet regime managed to send all who signed the resolution to early graves. In 1990 the same dream took our nation back to the roots of 1949 and as far as a truly independent country. It feels like we were one of the last dreamers in Europe. Is it possible that peace brought by sixty years of consensus building has broken our ability to dream? For too long we have been living on a promise to achieve common ground that a proposal to dream big sounds like audacity.

Are we still able to dream?

Last week one more election in Europe - in the Netherlands brought the results that are becoming more and more familiar — green parties are taking urbanite left, and radical right is taking the regional voters. Center-left or center right is no longer needed? The situation in both the Netherlands and in Europe looks rather similar. Why is that? The promise of fast solutions – be it possible terrorist attacks as in Utrecht or climate change are easy to promote, quick to reach people’s hearts. And it matters not, whether the promoters are actually keen on achieving any of the promises. All the cries over the winning of populists will continue because simply they are providing more solutions (dreams if you may) per minute spent in power than the current center parties. La Lega, Five stars, Marine Le Pen, AfD and I could keep on naming them, some are going down, and others have just appeared. It’s as if a cascade of populist rain has crashed on Europe.

We will have to make a choice. Going one way means continuing down the path that was set by the populists. Trying either out-populisting them or rationalizing – which means spending our lives on explaining to each and every person why and how populists are wrong. But this path might be dangerous and even counterproductive. Populists will beat center right and left parties in the populism field with agility and experience. For instance, in Hungary, we are (still) fighting a notion that George Soros is spending billions that immigrants would be free to roam poor old Europe. We are kindly asking Mr. Orban to remove fake news posters that he put out just before European Parliament election. The fight is nowhere near to its end and we already have used up our wit on what to do next with Mr. Orban. Isn’t it possible that two years from now center parties will be fighting anti-vaxers, chemtrailers and God knows what else. I can surely imagine parties of anti-reptiloids in ten years’ time if all goes well for “orbans” and “lepens” of Europe.

The other path is simply remembering where we started – at a dream. A brave dream that Europe can be at peace, united, and prosperous. It is a path not based on fear of being together, but on hope, that we can surely achieve more if we stay united. During the speech of then a candidate to become a Spitzenkandidate Manfred Weber among many other things he mentioned that he truly believes that Europe can defeat cancer. That rose some eyebrows. Is it true? Can Europeans dream, do Europeans know how to hope? Talking to people in my country I need to explain to them what is Brexit, why people decided to leave the EU, and why exactly do Lithuanians need to stay. Can you imagine a continent of 450 million people working together to achieve a common goal? What if that goal was getting rid of cancer, heart deceases other illnesses that haunt us? Europe can achieve that. People’s eyes light up. I haven’t heard a populist offer that, maybe because it’s hope and not fear.

Once I sat down with a group of Putin’s opponents in Vilnius to talk about Kremlin’s aim to create its own internet. Is there anything that Europe could do? Maybe set a few servers in Vilnius? Frankly, Europe could aim and provide free internet via satellites for all the oppressed countries, where access to free information is blocked. It is achievable, some private companies are working on that, but we could do it. Just imagine like Voice of Free Europe, or the Vatican radio, that reached millions of people in the Soviet bloc, allowing a peek of information from behind the Iron curtain. Now, using modern technology we could be offering the same, to the people of the Blocks of the XXI century. Some European leaders are offering the idea of the European army. I wouldn’t want to use it as a NATO substitute, but if we told on what would be the goals of it – it could very much become a reality. Europe has to stop being a security client of Erdogan and Putin. European force could be used to stabilize situations in countries like Syria and actually DEAL with the pirate issue in the Mediterranean. It can be achieved I am sure of it.

And I know what the critics will say. It is repeated over and over again - people are not ready. We have fatigue of expansion, fatigue of unification, but it feels as if we are in the car which is skidding on ice and the driver is pressing the brake when what he should be doing is hitting the acceleration pedal and the car will even itself out.

A final example, in 1962 JFK made a brilliant speech at Rice University, Houston. We are going to the moon. Not because it’s easy, but because it’s hard. That’s exactly what we need now. Not slowing down or stopping. Not easy solutions, petty battles, but hard reasons to stay together, work harder together and dream bigger together. Europe, dream big. It’s time.

Chief of Defense of Poland Lieutenant General Rajmund Andrzejczak, currently on a visit to Vilnius,...

Foreign minister: EU has no future unless people are engaged

As Lithuania prepares to celebrate the 15th anniversary of its EU membership on Wednesday, Foreign...