Kęstutis Girnius,
DELFI EN
The heralds of information wars are disconcerted, identify ever more battlefields, call on proper mobilisation. The latest example is the response of Aleksandras Matonis to a report aired on the Russian TV, in which members of the expedition Mission Russia have been referred to as tourists following the traces of the WW II victims and reportedly hoping that in the future joint Russian-Lithuanian groups would be travelling Europe to pay homage to the fallen Soviet soldiers. The leader of the expedition said such hope was actually expressed by the Russian journalist. 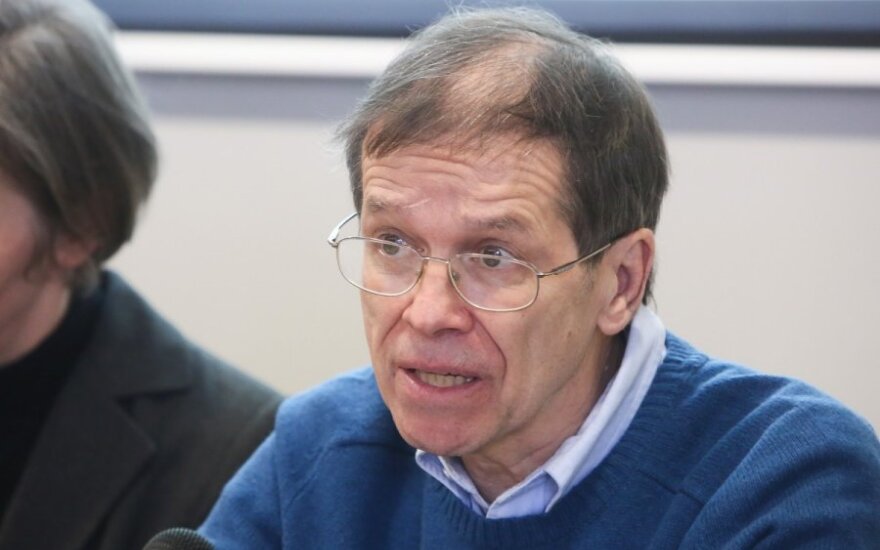 According to Matonis, such groups are travelling as the ambassadors of Lithuania, thus all of its participants should be perfectly fluent in Russian in order to be able to participate in lectures on the current interstate relations. His remarks show that the spirit of the Komsomol remains alive. In the Soviet era, every young person who travelled to the capitalist countries was considered a soldier of the ideological war and the travel to the lair of capitalism was supposed to serve the interests of the soviet homeland. Members of the delegations had to pass a meticulous selection process, get thorough preparation, and receive instructions on what they could or could not say.

If the proposals of Matonis were to be put into practice, it would mean the end of spontaneous benevolent youth expeditions or at least would change its nature and discourage sober-minded enthusiasts. Also, it would bring Lithuania closer to Putin’s Russia, where government seeks to ensure that its citizens are always “on the right track” and where almost any action is concerted with the government.

Fortunately, the head of the expedition stated that the youth was not planning to change anything. In my opinion, after giving a second thought about his remarks, Matonis himself would have put it in a different way.

Where the president leads, others follow, especially if it suits them well. A number of information war experts are here to advise and teach, the government provides more generous financing to the media, especially the national broadcaster, others talk of the need to prepare documentaries and other filmed material to shed light on the history and the course of events from the standpoint of Lithuania.

It is not my intention to state that the information war and its soldiers will serve no purpose to Lithuania. However, the damage it produces will be significantly greater. And I mean not only the time and funds expended. I suppose that the quality of the media, which already now is not at its best, will deteriorate, and it will also contribute to a more suspicious and less tolerant society.

On and on we hear people saying that the truth is the first victim of the war. This has been partly demonstrated by the recent Palestinian-Israeli conflict where the major concern was to demonise the enemy instead of making an effort of giving an unbiased coverage of events. Any minor criticism directed against Israel was perceived as support for Hamas and vice versa.

I remember that during the Georgian-Russian conflict in 2008 the national broadcaster hoisted the Georgian flag next to the Lithuanian one. Support for Georgia was comprehensible but the leadership of the national broadcaster LRT declaring its position so blatantly and thus renouncing any impartiality sent a clear message to its staff members that there was no point in presenting reports that criticised the actions of the Georgian leadership. Even the term “Georgian-Russian conflict” became a taboo and was considered a sign of bias and the outcome of favourable disposition towards Russia.

The Lithuanian media gave a broad and exhaustive coverage of the motivation and actions of the Maidan participants but made little effort in trying to understand the position of the residents of the Eastern Ukraine or examine the consequences of the ousted President Yanukovych actually being a legitimately elected Ukrainian president. What reports will we see if street fighting erupts in Donetsk and Luhansk? Will anyone risk saying that civilians were also hurt by the artillery of the Ukrainian army?

A decade ago, a responsible staff member of the weekly magazine Veidas explained to me the four stages of article writing: collect the facts, generalise, evaluate, condemn. Condemnation, a distinctive feature of combative media, was programmed. The Veidas probably no longer sticks with these guidelines but I do not think that they were lost altogether or that they have no repercussions in other Lithuanian media sources. My fear is that with the information war taking place, showing one’s civic position, even at the expense of truth and impartiality, will become a norm.

Lithuania is not a secluded and intolerant society as some eager critics like to depict it. However, there are sensitive topics that touch a part of our society, for instance, the participation of Lithuanians in the Holocaust, the Lithuanian post-war guerrilla repression, the Soviet occupation, all of which receive an extremely angry response. A huge storm of criticism was unleashed by the comment of businessman Vilius Kaikaris, suggesting that the strict Lithuanian foreign policy and political statements about the events in Ukraine and Russia will have an immense negative impact on the domestic economy. Some called him a traitor although he is most likely just a short-sighted self-seeker. His comment about the harm (although not necessarily an immense one) will most probably turn out to be true but he cannot complain because being a businessman he must realise that the Russian market presents great profits and big risks.

If Russian propaganda were effective, it would be imperative to react correspondingly. However, except for Russia herself and maybe some parts in Eastern Ukraine, it produces no effect whatsoever and is probably even counterproductive. Latest surveys suggest that even German residents who have long been positive about Russia are now turning away from the Kremlin and support the sanctions imposed by the EU. Regardless of all the talk about extensive means of propaganda and disinformation employed, there are barely any supporters of Russian policy among Lithuanians. Local Russians are not overly impressed with Putin. On the other hand, if Russian TV programmes were banned, if many politicians and public figures followed Mantas Adomėnas’ suit in teaching Russians how they should act, if Russians started thinking that they were seen with suspicion, then the favourable disposition towards Russia would probably increase.

Russia will not win the information war in Lithuania, thus no mobilisation is needed, the more so that talks of the war could have a negative outcome in the long-term. I hope that next year the youth will embark on another mission to Siberia without consulting the State Security Department and without special armament for the ideological battle. I also hope that when applauding another cultural achievement, President Dalia Grybauskaitė will not make references to the schemes of Moscow.

The Russian information war in Lithuania

Lithuania is one of many countries where Russia is waging war for hearts and minds – the...