Linas Kojala,
www.lrt.lt
aA
Russia’s actions in Ukraine show a cynical, and yet, according to Vladimir Putin’s understanding, the only possible response to regional development tendencies that have been evolving for decades. 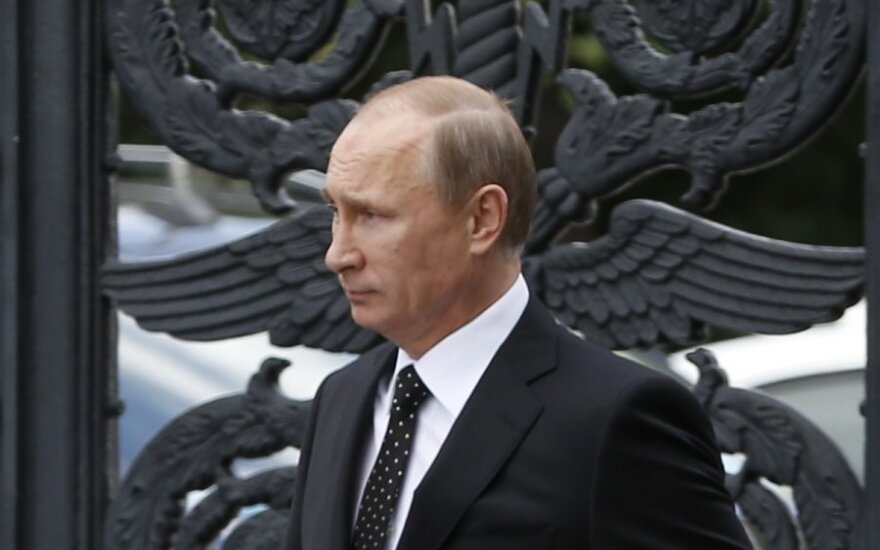 The direction of ongoing changes is crystal clear. After the collapse of the Soviet Union, Russia’s influence in the world has significantly diminished. From the superpower, which, although economically fragile, was able to affect processes in various spots around the world, it has become an autocratic country possessing nuclear weapon and energy resources, but with a rapidly declining zone of influence.

The Baltic States, Poland and other Eastern European countries have joined NATO and the European Union. Ukraine, even ruled by Moscow’s backed Viktor Yanukovych, has found itself a step away from the Association Agreement with the EU. Kiev together with Moldova and Georgia hope to put their signatures on the Agreement at the end of June, and thus finally reject the Kremlin’s directed alternative to the EU – the Eurasian Union.

Related articles
Opinion: Standing up to Gazprom. What Ukraine can learn from Lithuania

The situation in Ukraine also has a symbolic meaning: not only does it share a common border of more than two thousand kilometres with Russia, it is also the seventh largest country in Europe, without which, as was once said by Zbigniew Brzezinski, Russia will never become a Eurasian empire. It is therefore not surprising that Russia has taken all measures possible to keep Ukraine under its thumb. To that end, Russia has employed a once tested four-step strategy.

First, Russia has assessed the situation as worthy of the use of force, at the same time ignoring the critical reaction of the international community. Second, the set goal has been achieved at least partially – the integration of Ukraine into Western structures has been paused: being deprived of a part of the territory, i.e., Crimea, Ukraine has lost its opportunities to join NATO for a long time. Although the Association Agreement with the EU is still likely to be concluded, the Europeans are even more wary of the country, which is in the range of Russia’s military interests. In addition, it is still not clear how the country will be affected by the planned decentralization, in which the big eastern neighbour will undoubtedly take an active part.

Third, having achieved the primary objectives, Russia seems to agree with de-escalation, which is identified as the key aim by Western states. Recently, the Kremlin has been willingly talking about international negotiations, recognizes the president Petro Poroshenko, and less articulately expresses its support for separatists in eastern Ukraine.

And finally, we have come to the fourth step: with the fervour ebbing, Russia seeks to normalize the relations with other countries as soon as possible and to avoid any costs incurred due to economic and political sanctions.

These steps were quite successfully implemented in Georgia in 2008. At that time when NATO’s expansion plans in Georgia came to a halt, Russia demonstrated its power and its troops almost reached Tbilisi. Angela Merkel called it a “disproportionate” operation, and the Baltic countries and Poland condemned the aggression against the sovereign state. However, after the military movements stopped, the relationships quickly returned to normal.

Although Russia did not execute the plan as was negotiated by the President of France Nicolas Sarkozy and did not withdraw its troops from the part of the occupied territories, already in 2008 the EU renewed the talks on the strategic partnership agreement, which were frozen due to the conflict. In other words, despite the contradiction of the actions to international norms, in a few-months’ time Russia returned to the circle of elite states as a fully-fledged member.

Today’s situation stands between the third and the fourth step. It only depends on Western countries whether Russia’s actions will again be interpreted superficially, and the relations will be back to normal without posing any appropriate conditions.

First of all, Russia may not be granted an informal right of veto over the future of independent post-Soviet states: if the Russian aggression means the withdrawal of the Western states, then Russia’s right to forcefully make strategic decisions for the countries in the region will also be recognized. Secondly, the Eastern states of NATO have to become fully-fledged members of the alliance with revised plans for collective defence and adequate defence infrastructure.

Finally, Europe has to take advantage of the situation and reduce Russia’s influence in the field of energy by establishing a common gas procurement agency and strengthening the use of alternative energy sources such as shale gas from the US, Norway and other countries. Those are the minimum conditions which will not allow a precedence to be set that threatens the entire European security system.

As Russia wields its gas weapon against Ukraine, it has cut its price to Lithuania. How did that...