(2)
Mantas Čižas, „INK agency“
Vladimir Putin’s propaganda machine is well-oiled. That’s more or less what our media concludes from the ubiquitous lies diffusing from the Russian TV channels. When you work in communications, the operation of this machine seems even more menacing because it’s not only the final result that you see. You understand perfectly from this result the amount of people, resources and impact employed. 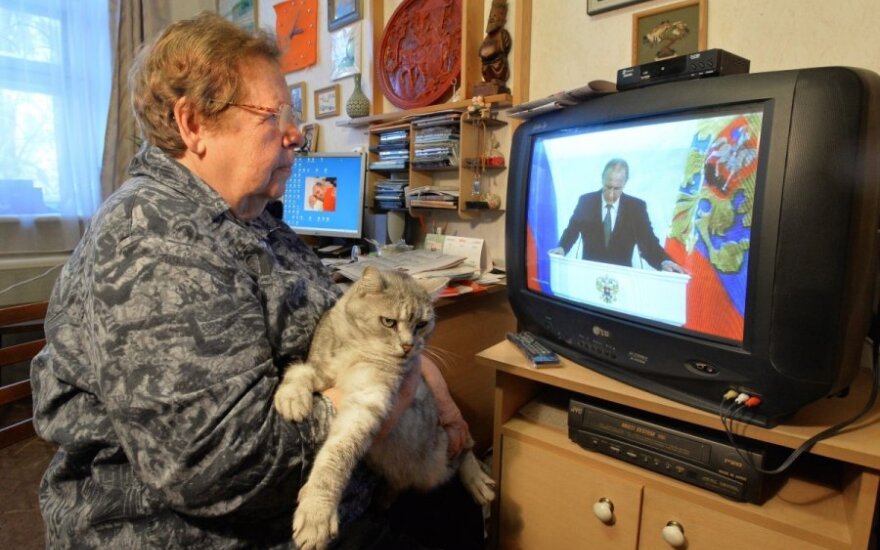 This present-day propaganda has all the fundamental and combined communication essentials: measures for controlling the media serve up well-planned publicity campaigns and pre-orchestrated news - a fine and creative cuisine. And there’s a nation that adoringly supports government policy – it’s all well-cranked public relations. Naturally it’s the journalists, the president and government set who are the public relations specialists and publicity directors. The invisible ones are the special services personnel who are typically responsible for the smear campaigns.

Anyone who’s watched the programs on one of the three daily television channels unsuspectingly realises that the combined propaganda is a huge and on-going project that is costing Russia’s people cosmic amounts. That’s if we compare it to a combined communications project developed by business. Even if in comparison with the Soviet times, propaganda in Russia has become rather expensive for several reasons: the country is no longer as isolated as it was; fighting opponents is now done on the Internet and the Western way of media has to be imitated. Round-the-clock hammering out party pre-requisites, counting the collective farms, factories and five-year records and showing generals dripping with medals on their chests is no longer enough. Present-day propaganda content must be up-to-date and first rate and Russia’s propagandists have consequently created a new genre with its own rules, forms and verified ruses. And you archetypically pay attention.

All opponents are peripheral. When in 2011 around 160 thousand Russians poured into a Moscow square, media propaganda ignored it from the start and then later proceeded to explain that the protesters were – as always – radicals. Armed with obscure flags and shouting fascist slogans they wasted no time in clashing with the police. Journalists always seek to show the opposition up as a fragmented and lethal microscopic part of Russian society. Just say on “Channel One” that nobody supports a meeting of peripherals and the word becomes a Russian reality. A crowd of hundreds of thousands can go home. And when you watch “Channel One” somewhere in Perm or Tolyatti there’s no way of really proving that this is indeed the case.

Base but memorable phrases. Vladimir Putin had hardly come to power when he started being derided for his timid diction and somewhat bureaucratic vocabulary. That’s at least how it seemed after the charismatic Boris Yeltsin. It was in all likelihood subsequently intended that a president who rose from the ranks of the FSB (the former KGB) would start to speak not with his height but rather with his fist. Initially, at organised events, Mr. Putin started emitting phrases that diverged from official style and his own bland image. He suggested to some foreign journalists that they get circumcised and he promised to “wipe out terrorists in the toilet”. And when asked about his political godfather’s fierce criticism of him he enigmatically enquired “so who’s Boris Berezovski?” The leader’s formal and informal quotes spread from mouth to mouth and helped craft the image of an iron Vladimir and matched the Russian musical standard.

Let’s call it something else. Russia is convinced that its language is “powerful”. The combatants in Donetsk and Luhansk are in fact called “separatists”. Television news reports gave them a new name and with it a new image in the eyes of ordinary Russians. Probably the most repeated word today over the air waves is the word “opolchentsy”, a Soviet term referring more or less to “armed volunteer defenders”. Some years ago it was “Russian peacekeepers” and not troops who stormed into Georgia. Before that troops of the Republic of Ichkeria, defending their country’s sovereignty, were baptized “terrorist fighters”. And there are the anecdotal acrobatics of language. For example, when the underwater vessel the Kursk lay at the bottom of the Barents Sea, Russian television passionately aired the version that the catastrophe was caused by another vessel indirectly blaming a clandestine vessel of the Western countries, not referred to by its Russian term but as a “submarina”.

The surprise factor. How to resolve the long-standing communication crises, which only the clutches of authoritarianism and censorship restrain from intrusion? Kremlin strategists know the answer: act suddenly and preferably when something else more important is happening in country or the world. That’s how Mr. Putin announced his divorce even though rumours about the ruined marriage had long been doing the rounds. After a short confession this subject was finally terminated in the Russian media. Mr. Putin’s courtesy shown to prominent Russian prisoner Mikhail Chodorkovski can perhaps be interpreted in the same way. This saga made it into the international arena but the fervour had already subsided. If protests, the urgings of foreign leaders and various resolutions hadn’t helped what would have? The good will of the Russian president!

Inclusions from the USSR. Our media often portrays Mr. Putin’s imperial ambitions as efforts to restore the Soviet Union. Nevertheless, that’s something you’ll never hear Mr. Putin saying himself. It’s rather his comrades-in-arms who’ll do that because that sort of thing will not yield the desired result. It’s a rare Russian who wants to live in the real Soviet Union. Mr. Putin rather is “selling” him a dream of a great country and its eternal leader simply dressed up in nostalgic likenesses. That helps “sell” his political promises, like long-lost friends of youth, to the people. An example is the supposed concern for the deteriorating health of Russian citizens. Here an initiative is being made to return the ”GTO standard gotov k trudu i oborone (ready for work and defense)” instead of creating new terms more suited to today’s realities. For “practical” reasons like this the Soviet anthem has been restored. Communist party statements already in existence are working in Mr. Putin’s favour – at times carried out with folded sticks, and sometimes functioning as the thermometer of public mood. Of course, it’s the unending documentary films that turn the record of nostalgia and which the television based on economy of scope cooks like pancakes.

The policy of speaking staff. Every evening the sparkling performances in homage of Mr. Putin eventually start to sicken television viewers and the image of the young, energetic and bellicose leader a few elections ago attracts ridicule even. Kremlin strategists have gauged the changed circumstances and start patiently forging a new image, one that is authoritarian and smart. He no longer needs to do it all himself. His insight suffices as does the fear most of his followers have, which makes them do their jobs well. That means that as of now they’ll have to applaud the president more. Oleg Gazmanov and Jozef Kobzon, who are unwelcome in the Baltic states, are just a small cell of an army of celebrities loyal to the government. They are without exception going full steam ahead. They represent all possible voter audiences. It’s enough to mention that the head of Mr. Putin’s central election staff in past elections was the film director and actor Stanislav Govorukhin. He at one time created the pivotal role in the film “Assa”, and which because of this is considered “perestroika’s” gift of freedom and a symbol of the sunset of the Soviet Union.

Even if tomorrow we were to switch off the television and all the chicaneries listed, the principle of “everyone supports him” all would apply for Mr. Putin’s interminable propaganda engine. On the other hand, for several years now the opposition is saying that the people’s empty faith in the government is more reminiscent of a financial pyramid scheme and that one day this faith will run out and the regime, like a house of cards, will collapse.

In the ideological part of his annual address, Vladimir Putin explained how spiritual Russia was...

The Seimas of Lithuania on Tuesday gave its initial backing to President Dalia Grybauskaitė 's...

DELFI editor-in-chief: Our readers understand that Russia is not joking (6)

Is it worth it to frighten the Lithuanian citizens with war? This question is not as simple as it...

In early December, the Lithuanian Cable Television Association (LKTA) signed an agreement with...