Opinion: How lucky I was to squeeze into the Baltic Way chain

(2)
Linas Jegelevičius | the Lithuania Tribune
Perhaps few events in my 43-year-old’s life have been so vivid and, without exaggeration, future-defining as the Baltic Way. 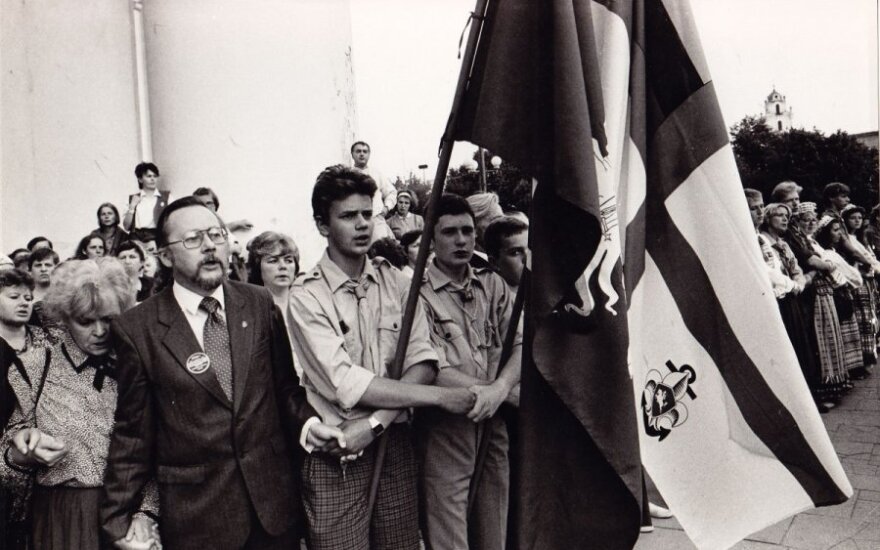 On 23 August 1989, a 650-kilometer human chain, extending from Lithuania through Latvia to Estonia, it linked some 2 to 2.5 million people from the Baltics and beyond.

As Lithuania is commemorating the 25th anniversary of the monumental event in its modern history, it still grips my heart with the century-like memories. Furthermore, these memories, I’ve got to confess, make me crank out a chuckle.

I could barely squeeze into the chain – so tight it was, if you can believe now. I find it funny now, but back then I was getting panicky: “Damn, I just cannot miss it!”

The early years of Sąjūdis, the Lithuanian national movement for cultural and later political liberation from the Soviet Union, lived through in my hometown of Alytus in southern Lithuania, had been in the past, throwing me into the whirlwind of it at the secondary school I went to (remembering the years, I perhaps should squeeze another chuckle, as the school’s Sąjudis group, to which I belonged, I reckon now, should have gotten off to another start than rebelling against the conservative, change-wary school principal first of all!), but the 1989 Vilnius, for me, a freshman of Vilnius University, and dozen my buddies out there, was been a real eye-opener.

We had learnt of the Molotov-Ribbentrop Pact, which divided the Baltics between the Stalin-led Soviet Union and Hitler-led Nazi Germany, from the Sąjūdis media, as the history textbooks we studied from in the late 1980s still touted the Soviets being Lithuania’s liberators in 1940.

But in 1989, the history in patriotically-bustling Vilnius, was making itself, rolling in front of our eyes through the multiple, true history-revealing exhibitions, presentations and, sure, ardent discussions on Vilnius streets and in the Alma-Mater we were part of.

The atmosphere was scintillating patriotic sparks, erupting into flare-ups and, few could miss, amassing charge of an imminent bolt, which was about to strike.

It jolted just a year and a half later, when the country proclaimed the restoration of its Independence.

These were the defining moments of the history for the nation and the generation.

How many folks can boast of having been through them?

How many people around can tell today they partook in history that would eventually change the world? For better. Not so many, I reckon.

But the generation of 1989 18-year-olds did partake in it, without giving much thought about it back then, swarming to the Sąjūdis meetings, jamborees and all kinds of gatherings, which were just part of life.

It came naturally, like the occasional abdominal gurgles I had at the end of a week, hardly being able to get through it with 15 Soviet rubles that my mother would pocket every Sunday night before taking off to Vilnius.

…but on that memorable day of my life, I finally got into the tightly-knit human chain.
In fact, in the heart of Vilnius, in the Cathedral Square, from which other hundreds and, perhaps, thousands of people willing to join others in the chain where whisked to other locations, as the human line in the capital was hardly penetrable.

Too much time has elapsed since 1989, and the memories, frankly, have faded through the ensuing years of the discoveries that FREEDOM bestows on one.

I still clearly remember that sense, so new, overwhelming and perceived more intuitively.

Standing in the line with the hands clasped, one had a sense that something big, a whole lot bigger than the Baltic Way was about to happen.

The ominous signs were there, but the deciphering came a little later.

It was a defining turn of history.

Let me add here humbly: in my life as well.

Indeed, how lucky I was to squeeze into the chain then.

Nine special information stands to mark the 25th anniversary of the Baltic Way have been unveiled...

Opinion: The Baltic Way, a policy of memory and cooperation (1)

I have to confess, that generally, I don’t like the term “ Baltic States .” This term references...