(1)
Ramūnas Bogdanas
aA
As the saying goes, a pessimist is just a well-informed optimist. Russia's president is able to get any kind of information, but this is not enough: it is important how this information is processed and used. One can judge from Vladimir Putin's 3 hours and 10 minutes long press conference, where he answered 53 questions, that his mind is protected from reality by a very dense sieve which only lets through information that he anticipates. The rest is rejected or modified in such a way that it becomes unrecognisable. 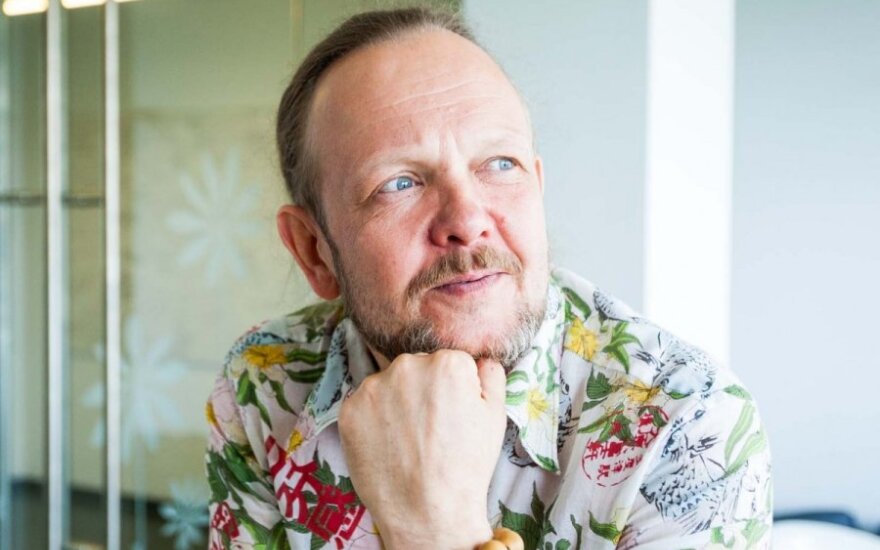 We all share this defect of thinking, but the head of a state is there exactly to think things through adequately. The head is surrounded by a group of other heads: advisers, scientists and other wise men and women. The future of the state depends on how accurately they can perceive the situation.

It sometimes happens that a person has one thing in mind says something else. One's body language often betrays discrepancy between one's mind and words. Putin walked onto the stage as if he were made up of two parts: the right side, which was turned to the audience, was stiff, the arm hardly moved and his right step was shorter that his left step. By contrast, the left side which was turned away from cameras was more active, he was waving his right arm widely as if trying to energize himself, motivate before the presentation.

When he started to speak, his voice was trembling at first, and this is not common for this experienced politician. Later he found the right tune, the voice became strong and level, although interrupted by small coughs. Unless the president had a cold, it means that the internal anxiety was not caused by the audience - he should have overcome any fear of public speaking over 15 years in power - but by more general circumstances that are making him uneasy.

When during this press conference he spoke about the Georgian-Russian conflict of 2008 and said that Mikhail Saakashvili had been the first to attack despite Putin's pleadings, the Russian president started to energetically rub his nose. According to body language experts, people who rub their noses or adjust their ties, are thus trying to hide the lie that they are saying.

Plan for the crisis – just wait

In the introductory part of his press conference, Putin told how the economy was growing, the agriculture industry developing, unemployment going down. The GDP was expected to go up by at least 0,6 percent, he said. He downplayed the dramatic devaluation of the rouble as mere "turbulence". Most importantly, he said that Russia was running a surplus budget. But he kept silent about the fact that people can hardly buy anything for these figures that add up.

Representative of the president's press bureau Mr. Dmitry Peskov had announced that measures of the rescue plan for economy would be presented at the conference. As a matter of fact, he was telling the truth, because the president did announce he would be taking the same action used during the 2008 crisis. And had he done back then? Nothing. Simply used currency reserves accumulated the preceding oil bonanza. It was a short dip, the global economy recovered fast and oil prices went back up. That crisis wasn't very painful for Russia and although the oil price was as low as USD 35 per barrel, the rouble went down one third rather than by half as now, when oil still sells at around 60. 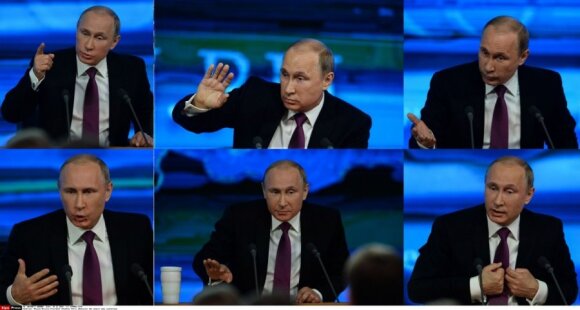 And this is all the plan Putin has: use the cash reserve and wait for oil prices to recover. He explains current hardship by external factors. Businesses, who were interested in maximum profits, are to blame for the failure to diversify economy and for keeping Russia addicted to hydrocarbons. Government policies have nothing to do with it. The conclusion: Putin made no mistakes, since he simply can’t make them. Instead of offering rational proposals for the economy, he concluded by saying that he believed life would teach businesses that there was the need to invest into other industries.

Until that happens and all is back to normal, all one can do is wait. Putin even set the deadline – two years at most. He even offered an encouragement: perhaps not even that long, only until next spring. And repeated his formula several times: the global economy is growing, which means that there will be more demand for energy, therefore more demand for Russian hydrocarbons. Conclusion: oil prices will inevitably go up.

This line of thought completely ignores the shale revolution which is turning the USA into the world’s biggest oil and gas exporter. Putin also shuts his eyes to the development of alternative energy sources and the return of Iraq to the oil market. Not to mention the slowdown of China's growth and many other factors, including the main one: lower energy prices encourage economic growth and are good news for car makers and heat users throughout the world. Oil and gas exporters have to compete for the markets. On the same day as Putin's press conference, the Saudi minister of energy announced that cutting oil production was out of the question.

Putin cannot blame the West for the crisis too straightforwardly, because this would make him vulnerable to questions about whether he understood the consequences of his actions in Ukraine, whether he is capable to make adequate calculations and assess risks and opportunities. This is why he blames the West in very generalized terms, using an eloquent metaphor of a bear that stands for Russia. Even if the bear starts eating only berries and honey, it will not be left in peace, the enemies will de-claw and de-fang it and make the bear into a stuffed animal.

Putin was so emotional about this vision that I got the impression that it is not Russia he identifies with the bear but himself. Nothing surprising, as he thinks of himself as Russia. "No Putin – no Russia," as one Putin devotee said recently.

When speaking about the bear, Putin highlighted his own blood thirst. He does not want to be a vegetarian. Peaceful cohabitation is a risk for him personally to end up as Gaddafi. He is not afraid for Russia's sake, he fears for himself and because of this fear, he is baring his teeth. In Putin's own words, the fangs and the claws are Russia's nuclear weapons. Although he draw the line here and rules out the denying possibility of a global conflict. He would simply like to be a big bear who can do as he pleases within the confines of the area he chooses.

Suspicion about the West is simply embedded in his thinking. When Putin kept on failing to find the right channel on his earphones for translation, he loudly expressed his anger: "It‘s done on purpose." When one knows the level of Russian consumer electronics industry, one can be certain that the switch was made in the West. And again they tried to harm...

Civilization for the world

Putin explained the sanctions for aggression in Ukraine as the cost of the Russians' efforts to remain a nation – as if it would not exist without Crimea. More so, Putin stated clearly that Russia was to be seen as a distinct civilization, one that the West continuously tries to eradicate. He forgets that the Russian Empire he admires so much was, at first, a European empire that the Bolsheviks sent down the drain.

Instead of Europe, Putin would love the idea of the Slavic unity under Moscow's wing, but with a sigh he admitted to the journalists that today other Slavic brothers were too oppressed by strangers to implement this vision. But never say never...

Putin does not threaten the world with a global nuclear war for the time being. He is not ready to go as far as Nikita Khrushchev during the Cuban missile crisis. Most probably it wasn’t a coincidence that Barack Obama recently announced he was restoring diplomatic relations with Cuba, thus preventing the possibility of history repeating itself in the US neighbourhood.

Although Putin is already softer with his rhetoric, he will step back only to the extent that has to today. With its last decision to ban doing business in Crimea, which coincided with the date of Putin's press conference, the EU demonstrated that it would not recognize the annexation of Ukraine's territory. It is important that now there is knee-jerk inclination in Europe to support a backing-down hooligan with charity packages. He will gladly accept investment and credit lines, though in his heart he will continue to mock vegetarian Europe and, with its own help, will try to regain strength for a new attack.

From an early age, the current Russian president was taught that the knights of revolution presented KGB with the launch of the process which should have continued up to the final victory of socialism in the entire world. He will not go that far, but he would very much like to surround himself with a ring of buffer states.  And, for instance, whether or not Sweden will be part of the ring will depend not on how Russia feels about Swedish neutrality, but on how much muscle it will grow.

The goal of global domination was inscribed in the coat of arms of the USSR, Stalin tried to make it happen, unsuccessfully, but today in Russia he is officially seen as an "effective manager". A detail that stuck in my mind from the press conference was that President Putin used exactly those words to describe one of his closest comrades, Igor Sechin, head of Rosneft. All Putin tries to do is to revive an old quest and if he fails, he will start over again.

Putin concluded his press conference be reiterating his hope that economic growth would return oil prices to what they were before. The Economist magazine has estimated that Russia currently has about USD 200bn in liquid reserves. For comparison, after the 2008-2009 crisis, reserves were USD 500bn, and since 2010 Russia’s economic growth has been shrinking by one percentage point each year.

Maybe every big nation has to walk the path it is destined to so that it sheds its predatory inclinations and becomes a responsible member of the global community. Any indulgence to Russia's current policies would be a path to hell paved with good intentions. If the West gives in to the knee-jerk wish to help unreformed Russia out of the crisis - which it has no one else to blame for but itself - next time it will be even more difficult to deter this country from wrongdoing.

This year Vladimir Putin 's annual address received particularly much attention: the leader of an...

In the ideological part of his annual address, Vladimir Putin explained how spiritual Russia was...

Marshall plan for Ukraine: What should be done a year after Maidan?

The new Ukrainian Government has been appointed one year after the Euromaidan revolution began in...

Opinion: The importance of manners in the East

A small episode recently has shown that Russian President Vladimir Putin feels like he is a...