Bede Sheppard, Human Rights Watch
aA
One year ago on June 18, Lithuania’s Ambassador Raimonda Murmokaitė raised her hand at the UN Security Council in New York to vote for a resolution strongly condemning military attacks against schools. The resolution also encouraged all countries to “take concrete measures” to deter the military use of schools by armed forces and armed groups in contravention of international law.
Sekite svarbiausias naujienas socialiniuose tinkluose! 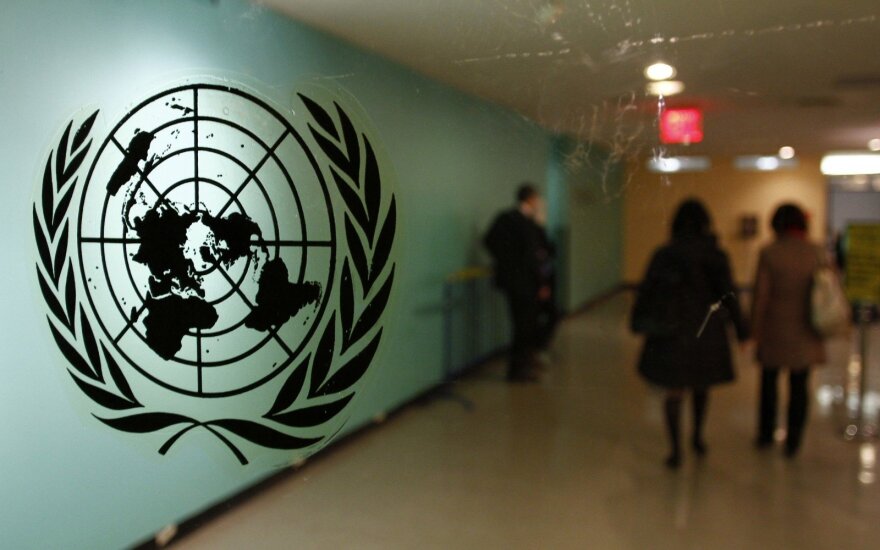 This was a significant move by Lithuania, and gave support and hope to all children living in war zones who struggle to continue their studies even as they and their schools are frequently targeted for attack.

Since 2009, at least 31 countries have experienced a pattern of targeted attacks on students, teachers, and schools for a variety of reasons. In Nigeria, the armed group Boko Haram, whose name translates as “Western Education is Forbidden,” has targeted schools because it objects to the ideas taught inside. In Ukraine, some schools have been hit by indiscriminate attacks using heavy artillery and unguided rockets in civilian areas.

But in many conflicts, including both Nigeria and Ukraine, schools have also been attacked because they were converted into legitimate military targets when one of the warring parties used a school as a base or barracks.

When fighters take over only part of a school, the practice also exposes students to the risk of sexual violence, forced labor, and forced recruitment by the soldiers sharing their schools. Students either stay at home, their education interrupted, or study alongside armed fighters while potentially in the line of fire.

That’s why this UN vote encouraging countries to take steps to deter such military use of schools was so crucial. The idea is simple: if soldiers refrain from using school buildings, fewer schools will be damaged or destroyed, and more children can go to school in safety.

But in the year since, Lithuania has yet to take the type of concrete measures to deter military use of schools that it encouraged other countries to do with its vote.

One step that Lithuania could easily take would be to endorse the Safe Schools Declaration, which was opened for states to join at an international conference in May 2015.

In joining the declaration, countries make a political commitment to a number of measures to better protect students, teachers, schools, and universities during wartime. These include conducting more investigations and prosecutions of war crimes involving schools; improving monitoring and reporting of such attacks; acting faster on mitigation when schools are attacked; and using a set of guidelines to minimize the use of schools and universities for military purposes.

At the Security Council, Lithuanian representatives have twice praised these guidelines. Ambassador Murmokaitė called on “all states and non-state actors” to abide by them “as a practical measure for protecting schools from military use.” On another occasion, Vice-Foreign Affairs Minister Neris Germanas welcomed them as a guide for states to improve their own domestic legislation and military doctrine. He noted that two countries affected by conflict, the Philippines and South Sudan, had already taken even stronger steps to restrict and prohibit the military use of schools. “More states need to follow those examples,” he said.

Indeed. So why Lithuania’s lack of action?

Last July, a spokesman for Lithuania’s Defense Ministry pointed to what he considered a low number of countries who had joined the declaration as a reason Lithuania needn’t to step up. It is a pity that Lithuania did not want to be a leader then. But it would be embarrassing if it now becomes a laggard, as the number of countries supporting the declaration is steadily climbing. As of today, 54 countries have endorsed it, including half of European Union member states and almost half of NATO. Among the ten non-permanent members of the Security Council that voted along with Lithuania last year, only Lithuania and Venezuela have not endorsed the Safe Schools Declaration.

When campaigning to be the first Baltic state on the Security Council, Lithuania asserted that security, development, and human rights are all linked together and mutually reinforcing. It also highlighted its commitment to protecting civilians, and especially children, during armed conflict. Lithuania should deliver on that promise.

The legacy of Lithuania’s stint on the world’s highest body for peace and security is weakened if it fails to follow through on what it has called for others do. Lithuania should join the Safe Schools Declaration.

Lithuanian Minister of Foreign Affairs Linas Linkevičius is leaving for New York to attend a UN...