BNS EN
aA
Mid-range Norwegian advanced surface to air missile systems (NASAMS) are to be delivered to Lithuania by 2020, the Lithuanian Defence Ministry said on Friday. 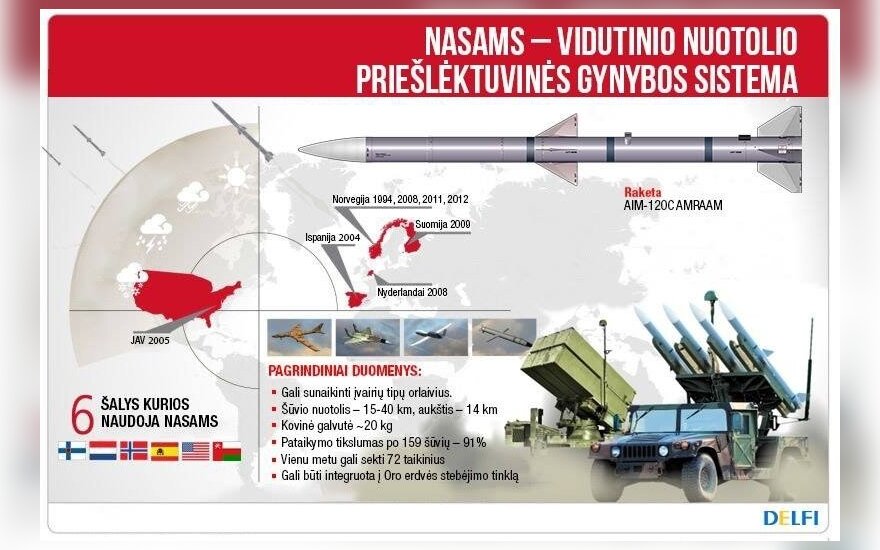 Lithuania and Norway have this week signed a technical agreement on the procurement of NASAMS components and missiles that sets out the terms and conditions and responsibilities of the parties regarding the acquisition, as well as Norway's support to Lithuania in developing mid-range air defense capabilities, it said.

"The signing of this technical agreement is one of the most important phases in developing mid-range defense capabilities of the Lithuanian Armed Forces," Defence Minister Juozas Olekas said in a press release.

"Our partner Norway has not only agreed to sell NASAMS equipment, which will strengthen the security of Lithuania's airspace, but also to assist in introducing the system in the Lithuanian Armed Forces," he said.

The Defence Ministry will continue the mid-range air defense system project to procure other NASAMS equipment: radars and fire control centers. All these components will be ultimately combined in a system capable of performing air defense tasks, including aerial surveillance and control, early warning for ground units, and destroying of targets when necessary, according to the press release.

Two air defense batteries will be equipped with the systems acquired from Norway.

Lithuania has been increasing weapons purchases and beefing up its defense budget in response of Russia's actions in Ukraine and in the Baltic Sea region.

Deployment of Patriot missiles in Lithuania being considered

The deployment of Patriot long-range air defence systems in Lithuania as part of NATO's...

Concepts of military strategy and doctrine have long influenced the political and military geography...

NATO Secretary General Jens Stoltenberg on Thursday assured the Baltic states that the most...

Lithuania is considering supplying the country's Armed Forces with missile artillery systems, a...

Lithuania's President Dalia Grybauskaitė says she updated US Vice-President Mike Pence on the...