BNS
aA
Ramūnas Karbauskis, the elder of the ruling political group of the Lithuanian Farmers and Greens Union, says that a new coalition agreement with the Gediminas Kirkilas-led Lithuanian Social Democratic Labor group would be harmonized and signed shortly. 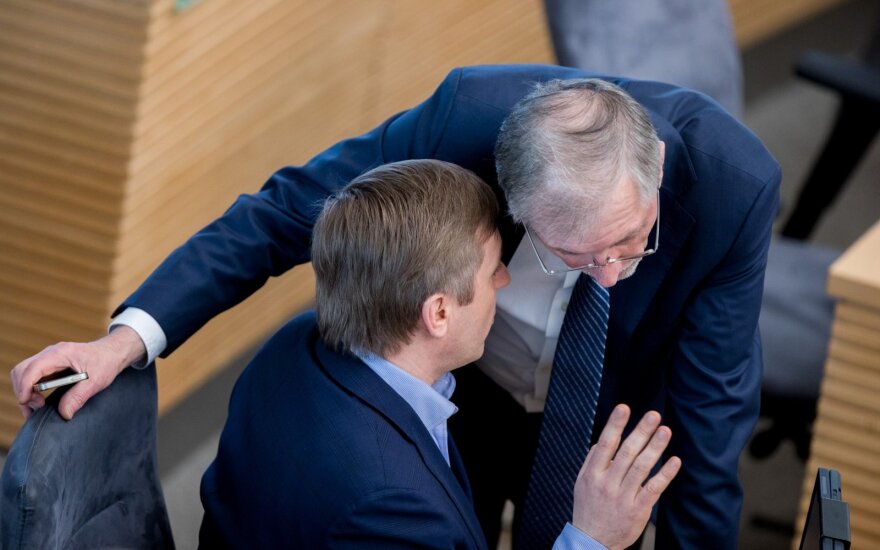 Karbauskis said the signing would be more of a formality, saying there should be new conditions or positions in the coalition deal.

"Nothing will be revised, I mean there should be no changes in the leadership of the Seimas or the government. We will simply define our cooperation as parties that have been established and that are represented in the Seimas," he added.

Kirkilas, the leader of the Social Democratic Labor Party that was registered last week, has said that the party would seek "equal positions, not only at the parliament, but also at the government" during negotiations for the coalition deal.

He now said that the party should not expect new posts in the government or the parliament, restating that the Social Democratic Labor group could seek some posts of vice-ministers.

In his words, the parties are holding talks and seeking consensus on participation in the future elections to local governments, the European Parliament and the president.

Establishment of the new Social Democratic party was fueled by last year's split in the mother Social Democratic Party after election of Gintautas Paluckas as its leader. Paluckas criticized inactivity of partners in the ruling coalition, initiating the party's departure from the ruling bloc with the LFGU.

The move was then objected by a group of the party's veterans who left the party and set up a separate Social Democratic Labor group in the parliament and signed a group coalition agreement with the Farmers and Greens Union.

Parliamentary Speaker Viktoras Pranckietis, delegated by the party, cannot be a member of any group due to his post.

Scandal heroes appearing from all corners: who will Karbauskis bet on?