BNS
aA
Lithuanian President Gitanas Nauseda is calling on the European Union to impose sanctions against Alexander Lukashenko and is planning to initiate European discussions on economic support to Belarus after the authoritarian regime falls.
Sekite svarbiausias naujienas socialiniuose tinkluose! 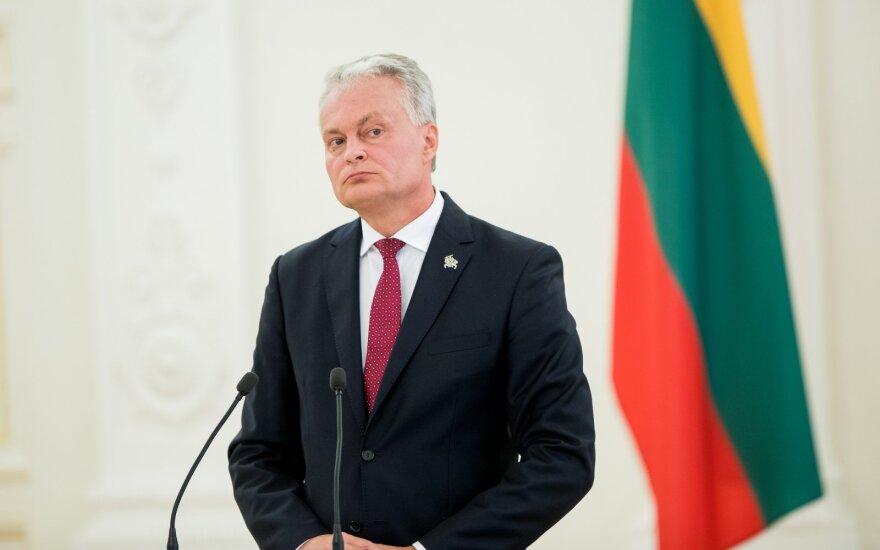 "But this wouldn't be the best solution, because I'm convinced that we as a community can do things both faster and more efficiently," he added.

"Today we have a situation where other major global powers – the United States and the United Kingdom – are still considering sanctions, too. The Baltic states, meanwhile, have set a good example not only by introducing a national list of sanctions, but also by including Mr. Lukashenko in that list," the president said.

"A list without Mr. Lukashenko is probably only worthy of a smile, because we all understand perfectly well that people on the list aren't independent (...) and don't have much say in Belarus' internal life," he said.

According to Nauseda, Lukashenko is to blame for Belarus' economy having become completely dependent on the Russian economy, and he no longer has the power to balance between East and West and resist Moscow's pressure toward full integration.

"Today, Lukashenko has reached a point where he faces the Belarusian economy's complete dependence and indebtedness, and new potential projects like the Astravyets nuclear power plant which will only increase that financial indebtedness and dependence," the president said.

"Today, he can no longer balance between East and West (...) and he is forced to turn his face to Vladimir Putin, his only partner. And Putin's intentions are quite clear. (The Russian leader) wants) to merge the two countries into one, which is something he had probably planned to do more than 20 years ago, and Lukashenko, in the current circumstances, has very little leverage to resist that integration pressure," he said.

The West can help by supporting Belarusian civil society and considering economic assistance to a post-Lukashenko Belarus.

"Support for civil society, students and all those subjected to the regime's atrocities must be provided, and an economic program must be drawn up in case Belarus chooses a path without Mr. Lukashenko. We must discuss this today. Therefore, I'd like to see the West play a greater role and suggest following the lead of the region's states that are showing leadership in this matter."

Svetlana Tikhanovskaya, the opposition challenger in the August 9 presidential vote, can be recognized as a national leader because there is indirect evidence that she won the election, according to Nauseda.

"Of course, we can regard Mrs. Svetlana Tikhanovskaya as the winner based on circumstantial evidence," the president said, noting that while more than 200,000 people gathered to support the opposition candidate in a post-election demonstration even though they were discouraged from and threatened not to do so, a counter-rally of Lukashenko's supporters drew just over 10,000 people, even though they were forced to attend and get paid for it.

"Isn't this a sufficiently eloquent indicator of which leader Belarusian people side with?", he asked.

"We have to say now that Mrs. Tikhanovskaya is a national leader who is taking on her responsibilities and is increasingly being heard as (...) the leader of the national Coordination Council," Nauseda said.

"I do hope that she'll patiently bear that responsibility all the way through" until Belarus holds new elections in which all candidates will be free to run, he added.

"Then we could talk about real elections held with external observation and under the right conditions, and then we would determine who the real leader of Belarus is. And which way (the leader) chooses – to the West, East, South or North – is the choice of the people of Belarus and no one has the right to exert any influence from the outside".

When asked whether Belarus might halt export shipments via Lithuania, as threatened by Lukashenko, Nauseda said he did not know "what might be going on in the minds of these people".

The president noted that economic losses to Lithuania would not be as great as the neighboring country's authoritarian leader says.

"The economic reality is that Belarus is the one that benefits most by transporting its cargo through the port of Klaipeda port," Nauseda said, adding that he is "very skeptical" of Lukashenko's statements about what impact such a move would have on the Lithuanian state budget and its economy.

"However, we want economic cooperation to take place, because, first and foremost, it benefits the people of Belarus (as it means) jobs, wages and a normal economic process," the president said.

"That is why we are very careful when we speak about possible economic sanctions on Belarus, because they would, first of all, punish (...) ordinary people who are now protesting against the regime," he added.

Lithuania will coordinate its position with the other two Baltic countries and Poland while expanding its national sanctions, according to the president.

"The initial decision was (to blacklist) 30 names. I said right away that this was not a final list and that it might be expanded. This is the issue we are now working on and seeking (...) agreement on with our neighbors, first of all, Latvia and Estonia," Nauseda said.

"I also intend to speak with the Polish president in the near future, because, as far as I know, such a discussion is also going on there, too. I'd like to encourage them to go the same way," he added.

The Lithuanian parliament adopted on Thursday a resolution calling on the international community to...

Lithuanian and EU diplomats arrive to protect Alexievich from detention

Diplomats from Lithuania and other EU member states have on Wednesday arrived in Nobel Literature...

Lithuania and Ukraine are holding the same position on the situation in Belarus and are calling...