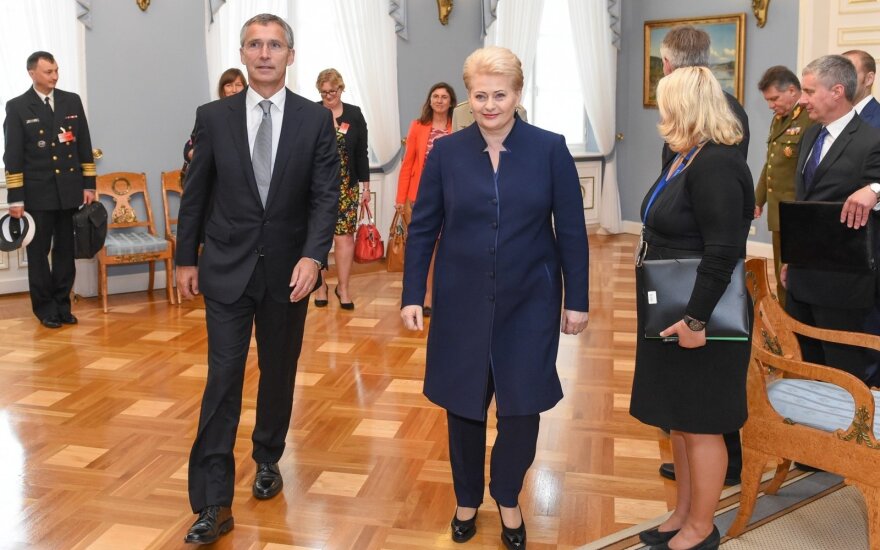 "The exercise shows that the formation of the NATO forward presence battalion has been completed. The secretary general is the architect thanks to whom we have the NATO battalions. He has personally contributed a lot to NATO reforms being carried out so swiftly and decisions beign implemented so fast. Thus, we regard this person as our friend, a friend of Lithuania," Grybauskaite said on LRT Radio on Tuesday morning.

The event is also expected to be attended by Defense Minister Raimundas Karoblis and Chief of Defense Lieutenant General Jonas Vytautas Zukas, as well as ambassadors, chiefs of defense of other NATO countries, members of the parliament and other guests, the Defense Ministry said.

"The distinguished visitors and media representatives will be invited to observe a display of water obstacle crossing operation demonstrating the multinational battle group with heavy equipment crossing a river via a pontoon bridge provided by military engineers and proceeding to its task," the ministry said in a press release.

"A static display of military vehicles and weaponry used by exercise participants will be available at the event location," it said.

Held in Lithuania on June 12 through 23, the Iron Wolf exercise involves over 5,300 troops from ten NATO countries. The troops are training to conduct defensive and offensive operations in Lithuania's military training and other areas, the ministry said.

"Readiness of the NATO enhanced Forward Presence Battalion Battle Group to carry out a spectrum of tasks along with partners will also be assessed at the exercise," it said.

The Iron Wolf 2017 exercise is part of the Saber Strike drills in the Baltic states and Poland.

NATO Secretary General Jens Stoltenberg is coming to Latvia and Lithuania next week.

NATO will closely follow Russia's military exercises near the Baltic countries' borders, including...

An international two-week exercise Iron Wolf II is kicking off on Wednesday in Lithuania's...