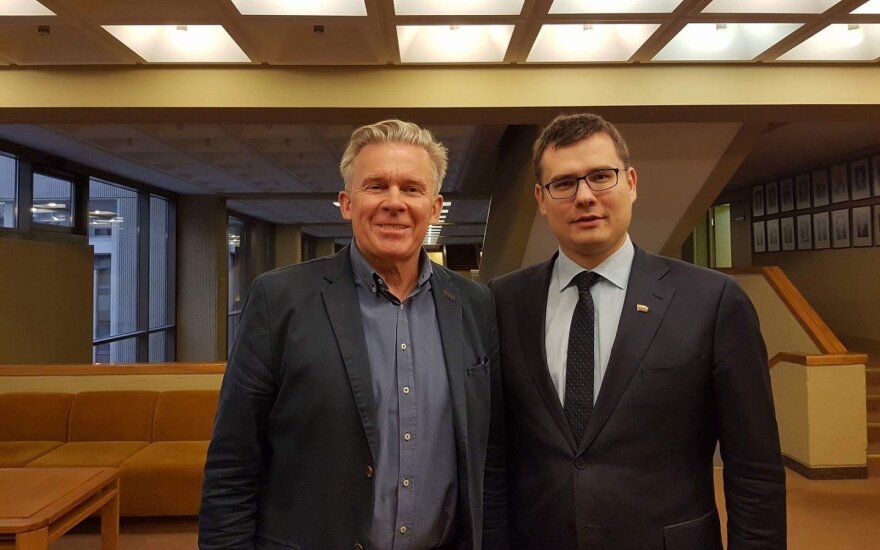 Audronius Ažubalis and Laurynas Kasčiūnas have tabled a bill that would require anyone who held high-ranking positions in the LCP during Soviet times to declare this fact while running for parliamentary, presidential, municipal or European Parliament elections or applying for posts in the public or diplomatic services.

If an applicant concealed the fact, he or she would be disqualified from the competitive selection process. The Central Electoral Commission would announce that a candidate was part of the former Communist elite if the candidate himself or herself failed to do so.

"I would call this day as the beginning of the end of a chapter of the history of the Lithuanian state," Ažubalis said at a news conference on Wednesday.

"Our bill is aimed at explicitly naming the Lithuanian Communist Party as the real culprits of the Lithuanian occupation period and the ones who inspired and organized the multifaceted and massive terror against Lithuania," the lawmaker said.

"We are speaking about people who held high-ranking positions and made decisions. The LCP as a whole is declared a criminal organization, but that would directly affect higher-ranking individuals," he added.

Gvidas Rutkauskas, chairman of the Union of Lithuanian Political Prisoners and Deportees, said that their organization, which has almost 30,000 members, had waited for such a bill for several decades.

When asked about the timing of the bill submission, Ažubalis said that the proposal would have met with strong opposition if it had been tabled earlier.

Under the draft law, the LCP is declared "a criminal organization that established a dictatorship in the USSR-occupied Lithuania between 1940 and 1941 and between 1944 and 1990".

More classes should be given in Lithuanian at ethnic schools, TS-LKD members say

The use of the state Lithuanian language should be increased at ethnic minority schools in the...