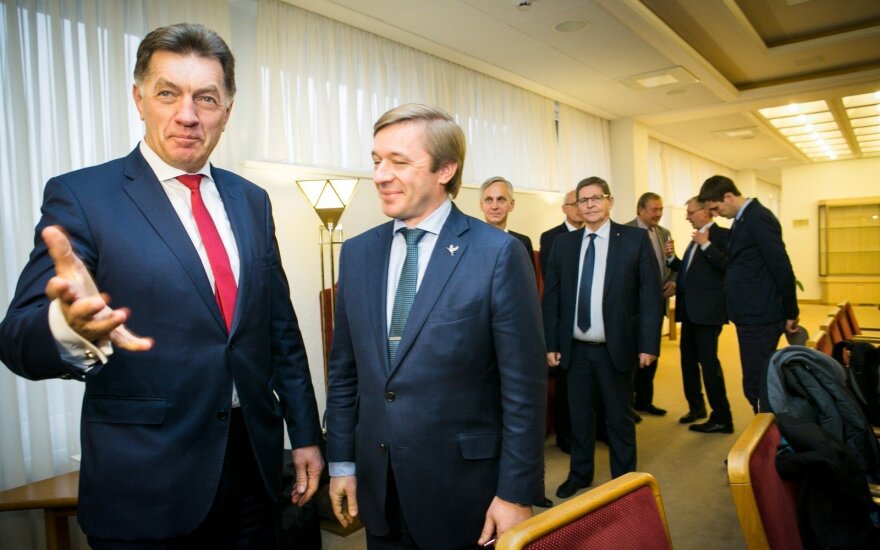 Saulius Skvernelis is already being titled as the next Prime Minister, but he assures that the list of candidates for minister posts will only be announced when he is confirmed as head of the cabinet and begins talks with them. According to Alfa.lt sources, the “Peasant” and Social Democratic Party leaders already have future ministers in mind however.

As a reminder, the Lithuanian Peasant and Greens Union (LPGU) coalition agreement with the Social Democrats (LSDP) states that the SocDems will be in charge of the ministries of foreign affairs, justice and economy, while the Peasant Greens will delegate ministers for the remaining 11 ministries.

The ministries of finance, environment, healthcare and culture provoke the least debate in the “Peasant” ranks.

Financial analyst, economist Stasys Jakeliūnas, who left PM Algirdas Butkevičius’ team after a conflict in 2014 is being considered for the post of Minister of Finance. Environmental Organisation Coalition Chairman Kęstutis Navickas is running as a candidate for Minister of Environment. The candidate for Minister of Healthcare is Aurelijus Veryga, a psychiatrist, as well as professor at the Lithuanian University of Health Sciences and chairman of the M. Valančius Sobriety Movement. Diplomat Liana Ruokytė Jonsson is being considered for the post of Minister of Culture. According to information gathered by Alfa.lt the “Peasants” intend to propose the former head of the State Price and Energy Control Commission Virgilijus Poderis as Minister of Energy and member of LPGU, head of the Lithuanian Agriculture Chamber Bronius Markauskas as Minister of Agriculture.

Unofficial sources suggest that the Peasant Greens are still seeking candidates for the post of Minister of Education and Science, with Lithuanian Educology University (LEU) professor and studies Prorector Vilija Salienė and LEU History faculty dean Eugenijus Jovaiša having been considered for candidacy.

The Ministry of Transport and Communications, which the Social Democrats relinquished has two candidates being considered by the “Peasants” – incumbent nonpartisan Minister of Energy Rokas Masiulis or lawyer Šarūnas Keserauskas, who is currently representing the Competitiveness Council. The General Director of Lietuvos Energija Dalius Misiūnas was also mentioned as a potential candidate, but he is apparently uninterested in taking the post.

The Peasant Greens search for a Minister of Interior is being done not just among politicians, but also among the ranks of statutory officers. The possibility of this post being offered to the head of the State Border Control Service Renatas Požėla is not being dismissed. S. Skvernelis has proposed him to take the position of Police General Commissioner at an earlier time, but the post went to Linas Pernavas.

During the negotiations the Ministry of Social Security and Labour was originally to go to the Social Democrats. Unofficial sources suggest that it was previously considered that the current Minister of Finance Rasa Budbergytė could be delegated. In the end a last minute swap for the Ministry of Economy occurred. According to the sources, the “Peasants” are currently feverishly seeking candidates for the aforementioned post, but have no specific names at hand yet.

LPGU leader Ramūnas Karbauskis has ealier stated that the choice of Minister of National Defence will go to President Dalia Grybauskaitė.

New faces among the SocDems

Incumbent Minister of Foreign Affairs Linas Linkevičius is expected to stay for another term, suggest Alfa.lt sources. This politician apparently also has the support of the President. Nevertheless, unofficially it is rumoured that the SocDems are not unified on this candidacy. A potential alternative for Linkevičius is the head of the Representation of the European Commission in Vilnius Arnoldas Pranckevičius, who worked as an external policy advisor for European Parliament Chairman Martin Schulz in 2012-2016.

With the trade of the Ministry of Social Security and Labour for the Ministry of Economy, Alfa.lt sources suggest that the Social Democrats are considering giving the minister seat to the young mayor of Jonava Mindaugas Sinkevičius. He would remain in the post even after the merger with the Ministry of Energy.

It was often announced earlier that the LSDP intend to propose the incumbent head of the Seimas Law and Law Enforcement Committee Julius Sabatauskas or the Criminal Intelligence Parliamentary Control Commission head Darius Petrošius as Minister of Justice, but according to Alfa.lt sources the most realistic candidate for this post could be Vilnius University Law faculty lector Nerijus Kasiliauskas.

The conservative Homeland Union –Lithuanian Christian Democrats, the Liberal Movement and the...