BNS EN
Participants of the 16th Mission Siberia have left for Russia's region of Irkutsk to clean up Lithuanian cemeteries and meet with deportation survivors and their descendants who still live in Siberia. 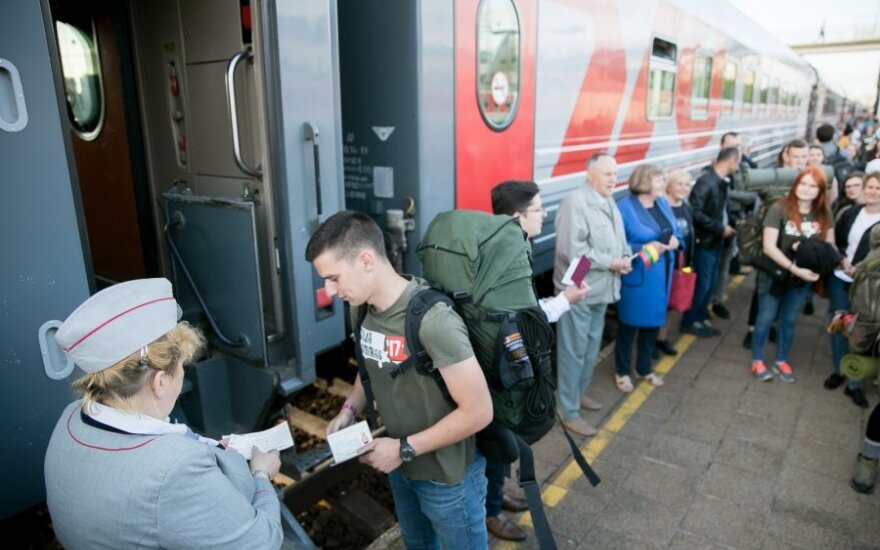 The team were seen off at Vilnius' train station on Monday evening by their families, participants of previous missions and politicians.

"Don't get lost, we must be united," Viktoras Pranckietis, the speaker of the Lithuanian parliament, told the team of 16 young people who are traveling to the Tulun and Nizhneudinsk districts of the Irkutsk region.

He handed them a copy of the original Lithuanian Act of Independence of 1918, which was found earlier this year in a Berlin archive, and asked to present it to Lithuanians in Irkutsk.

"There are exiles in my family. I have been aware of this part of history since my childhood. But what is the most important about Mission Siberia to me is the civic participation of young people. That's why I filled out the questionnaires to join (the mission)," Simona, 23, told BNS, adding that she succeeded only at the third attempt.

Deputy Foreign Minister Neris Germanas gave the members of the team special shoelaces "to help keep their heads up" and Education and Science Minister Jurgita Petrauskiene gave the travelers Lithuanian herbal tea to warm them up in the harsh Siberian conditions.

"I hope I won't need the shoelaces. I'm ready, this isn't my first difficult trip, but tea will probably come in handy," Tomas, a 27-year-old participant whose mother was born in exile, told BNS, adding that he was confident about himself and other members of the team.

Over 100 Lithuanian cemeteries have been cleaned up since the launch of Mission Siberia expeditions in 2006. More than 12,000 young people have applied to take part in the difficult trips to exile sites.

Participants of this year's Mission Siberia expedition were greeted with deportee songs upon their...

Participants of the Mission Siberia 2016 project will this year visit graves of Lithuanian deportees...

A group of university students from Russia are coming to Lithuania in mid-July to take care of the...