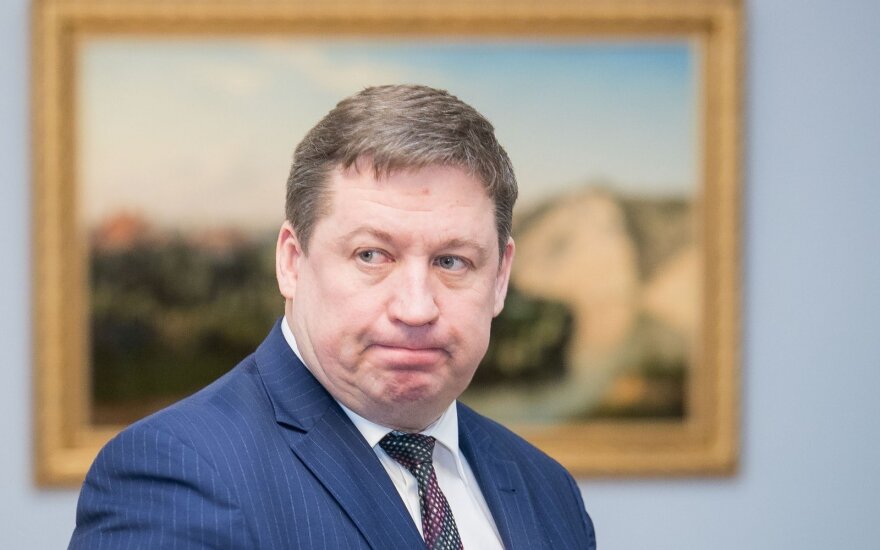 In an interview with BNS, Karoblis said that such an agency could start working next year and that it will be created based on a model that will be chosen after analyzing the experience of Germany, the Scandinavian countries and Estonia.

The minister named stepping up cyber-defence as one of his priorities.

As part of efforts to further reinforce the Armed Forces, it will be proposed that the State Defence Council should decide on an acquisition of military helicopters, he said.

Much attention was given last year to a RAND Corporation analysis showing that Russia could occupy the Baltic countries states in a matter of 36 to 60 hours. Do you agree with that assessment?

There can be no single answer. Our military say 'definitely not'. Plans are arranged in such a way that there would be adequate resistance at least until we get serious support from the allies.

But the most important question is not how much time it would take to occupy or to not occupy us. There must be readiness and deterrence to discourage the adversary from acts of provocation or broader action. We must get ready for hybrid threats and conventional war moves. We must have long claws and sharp teeth.

The situation is no good. Russia is beefing up its capabilities in much of the country and Kaliningrad is being supplied with new weapons too, On the other hand, we never had so many allies and guarantees as we do now.

Can Donald Trump's election as US president and possible political changes in Germany , which will lead NATO's battalion in Lithuania , reduce the allies' commitments?

We do not need to speak about concerns as to the US and Germany. We need to work and show that we are ready to make out contribution for the benefit of both the US and Germany so that the collective defense system is not only maintained, but it is strengthened as well. The whole of Europe should seek to boost the rose of the US. I saw a complete consensus on that matter during a dinner of EU foreign ministers in November. I believe that we will get an even stronger result through work.

EU member states have had different positions on cooperation with Russia for a couple of years now. Despite that, the sanctions were imposed unanimously. Thus, we are united on strategy, even though there are differences as to tactics.

Will an agreement on the status of US troops in Lithuania be signed before Trump's inauguration?

We are planning to sign the agreement next week.

Can Lithuania have difficulty hosting the allied troops due to its limited military infrastructure?

We are working on some projects 24 hours a day, 7 days a week. Everything is calculated to make sure we can host the allies. Professional soldiers and conscripts in Rukla may have to squeeze up a little this year, but the barracks will be expanded over time.

Let's switch to national capabilities. Do you have plans to introduce universal military conscription?

In principle, I am in favor, but we must take into account both public opinion and our possibly. Some 3,500 or 4,000 conscripts appear to be a limit for what our military can handle. We need to find a balance between conscripts, professional army and volunteers. We face challenges as to barracks, officers, non-commissioned officers and we need stricter controls of those evading military service.

If the political situation does not change, we have to move toward universal conscription, but this has to be done gradually. It is possible that this will not happen during the current government's term of office.

Do you have a plan for pay raises for professional soldiers yet?

The current government's program envisages a 30 percent pay rise for all statutory officers during the term of office. The current plan calls for a 5 percent increase in the second half and of around 10 percent next year. We will speak to the military about whether this could be expedited. We plan to review compensation for travel costs. The third important issue is the size of pensions; I have no answer here yet.

What major military purchases are planned this year?

The second important issue that we perhaps should discuss at the State Defense Council is that of a new helicopter platform. At some point, we will have to switch to a Western platform from the current Mi-8 with its maintenance problems and low efficiency. The three Dauphin helicopters that we have do not cover all the needs.

Some diplomats from countries which were not selected for procurement say that there was no real competition either for armored vehicles or for air defense purchases and that invitations to submit projects were just a smokescreen and that political motives were, to a large extent, behind the decisions. How much politics and how much competition are there in military purchases?

I am in favor of the best possible quality/price ratio Boxers are a completely new technology.

Would you say that abundant purchases of military equipment from Germany and the Germans' decision to lead a battalion in Lithuania are not communicating vessels?

This may have a positive impact, but I would not dare to say that the Germans came here because we bough the Boxers. Is this the reason why the British have come to Estonia? It appears that there is no direct link here. It is my fourth week here (in the post of defense minister), but as far as I understand, technologies were looked at more.

If we have a good quality/price ratio, I am certain that we will purchase from America or other EU member states as well. Purchases from Israel are not due to political aspects, are they? They are due to technology, quality and price.

Will you seek revision of the mandate of the NATO air-policing mission so that it could also engage in air defense?

During times of peace, air-policing has fully served its purpose ever since we joined NATO. On the other hand, we have to admit a gap in air defense during crisis or war. We do not have solutions in this respect yet, this will take political will from us and NATO Allies, we will work here. I strongly hope that the NATO defense plans will be revised in light of actual situations, and the decision on air defense will be found.

Last year, some German officers started speaking about the possibility of deploying Patriot long-range anti-aircraft defense systems in Lithuania. How realistic is that?

This is a decision up to our Allies on which weapon would be adequate to the current situation and their tasks of being here. We would want strong weapons, however, the weaponry will be chosen by Allies.

Is it too early for Lithuania to think about long-range defense of its own?

We can think but we should first take care of medium-range defense, train our people, develop short-range capacities and complete our radar system. This is something we are thinking about but this is not a short-term project. This is more than just ordering and paying, it also involves preparations. We have a lot of homework to do.

You have spoken in support of more active participation of Lithuanian troops in international missions. What missions are these? Iraq and possibly Africa?

We have to demonstrate solidarity and, at the same time choose the missions we want to take part in. Our allies know the potential of our special operators. Six of our instructors will shortly be sent to Iraq, training of Ukraine's special forces is in progress. Our troops remain in Afghanistan, we used to make a contribution in Mali. We are also speaking about participation in the Mediterranean Sea with Germans.

Cyber defense is becoming an increasingly relevant issue, Lithuanian institutions are halting the development of a data center outside Vilnius amid Russian spying threats, cyber attacks are growing more frequent. What are your plans about stepping up cyber defense in the Lithuanian Armed Forces?

This should be one of the priorities. Cyber security will be one of the main functions of one of the future vice-ministers will be. We have to invest more in people and new technologies – both in deterrence of cyber attacks and in cyber intelligence and counter-intelligence capabilities. In the cyber field, we should step into a new quality level. And we should take more than one steps, we should take at least a few.

How far can the EU go with the common defense vision? Would you support establishment of a common EU staff?

The ideas are good, if they lead to higher funding of EU defense and bigger capacities of member-states. At the same time, it is important to avoid overlapping of NATO and the EU. Opinions in connection to the staff differ, there is a certain degree of skepticism, it is one of the issues that should be discussed. The other issue is the so-called enhanced cooperation where countries decide for themselves which areas they want to cooperate closer in. The question is whether we should demonstrate different ambitions when we have NATO.

The European Commission's proposal on defense industry and research envisages fewer benefits for Lithuania than for other countries, however, we should support the initiatives, if they enhance the defense of member-states.

One of the tasks for you as the defense minister is to manage the public procurement in the defense system. What is your view of the current situations and what steps do you intend to take?

There are gaps, we must speak about major reforms of the procurement system. Currently, the structure of procurement is decentralized, with 17 different task force in operation. We must follow the good examples from the Western world about a separate procurement agency that would be the focus of all procurement, possibly except for the smallest purchases. We analyzed the work of the German agency, we will still analyze the Danish and Norwegian models, assess the practice of Estonia that founded an agency started the beginning of the year.

With all officials and experts in one place, it would be easier to apply various safeguards, activate internal and external control, for instance, by the Public Procurement Service and the Special Investigation Service. We should move in the direction of the system, unless we receive very clear evidence of the costs exceeding the benefits. Selection of the model, drafting of legal acts, establishment of connections with controlling institutions and selection of people is not a task for a month. We can talk about the start on January 1 next yer.

Now we should speak about introduction of temporary additional safeguards, starting form control of drafting of specifications, better use of the mechanisms of the General Inspectorate on hot lines and signals from below.

There can be no room for group interests and protection of companies. These things will not go unpunished.

Lithuania's Defence Ministry has signed a contract with Swedish company SAAB Dynamics on the...

Lithuania is considering supplying the country's Armed Forces with missile artillery systems, a...

Lithuania should boost input to intl operations -Minister of Defence