(3)
Linas Linkevičius, Foreign Minister of Lithuania
aA
NATO-Russian relations are where they are, at historic lows, because of what Moscow does, not because of how Western nations react to it, Lithuanian Foreign Minister Linas Linkevičius argues in an op-ed piece for Politico. Russia needs to prove it deserves to be spoken to, while holding meetings for the sake of meetings will be counter-productive.
Sekite svarbiausias naujienas socialiniuose tinkluose! 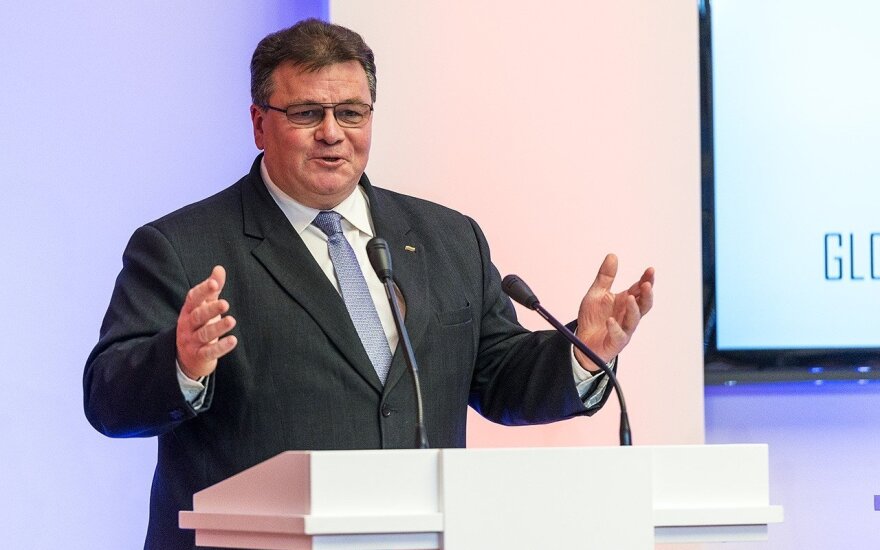 For many years NATO attempted to use dialogue as the basis for its partnership with Russia. The Alliance operated in the spirit of trust and transparency. But this trust was, too often, abused: Russia disregarded the principles laid down in the 1997 NATO–Russia Founding Act; withdrew from the Conventional Forces in Europe Treaty; violated the Helsinki Act; bullied its neighbors, and tried to block Central European democracies from becoming NATO members.

And still the Alliance continued to hope for a constructive approach from Moscow. It agreed to work with Russia on missile defense, and, after Moscow’s military aggression in Georgia in 2008, only suspended formal meetings and cooperation in some areas. This approach stems from the Western belief that deep-rooted differences of principle can be resolved at the negotiation table. But it needs to change.

NATO must make sure the discussions do not serve as a smokescreen that favors the aggressor. This is particularly important as Russia tries to blackmail NATO into renewing frozen relations.

At the Munich Security Conference Russia’s Prime Minister Dmitry Medvedev warned of the likelihood of a new Cold War. Medvedev called for intensive dialogue and for the restoration of mechanisms to settle mutual concerns, such as mutual arms control. He blamed the West for “refusing to cooperate”.

Medvedev's “blame-the-West” narrative was even seriously discussed in Europe, with some leaders suggesting that Western countries should go back to business as usual with Russia.

Nobody denies the importance of such dialogue. But how can the West assure that this “normal dialogue” is not regarded as tacit endorsement of Russian crimes?

It’s important to get the facts straight. NATO-Russia relations are at their lowest ebb in years. This is not because democratic governments made “statements of deep concern” regarding Russian involvement in Ukraine. Deteriorated NATO-Russia relations are a direct consequence of this aggression. Russia grossly violated international law and Ukraine’s sovereignty by annexing Crimea. Its tanks still roll down the streets of Donetsk and its bullets still kill Ukrainian soldiers defending their homeland.

Beyond Ukraine, the Kremlin continues to engage in massive propaganda campaigns aimed at dividing NATO and the EU. It has even gone so far as to use the migration crisis to its own advantage. Do these actions really fall in line with the sincere wish to cooperate with Europe Medvedev had talked about?

Russian actions have made huge fissures in the European security architecture, and the Kremlin shows no sign of changing course. It uses instability in the Middle East and North Africa to obstruct the international coalition’s efforts to fight terrorism and play down concerns about its aggression in Europe. Such policies aggravate our present security threats.

Serious NATO-Russia dialogue must address real concerns. Admitting that the Kremlin is a part of the conflict in Ukraine would be a good start. Russia has to explain its aggression in Ukraine, withdraw its troops, ensure border control, and return annexed Crimea. This will not happen overnight, but Russia must take first steps in this direction immediately, and prove that it wants to take up constructive dialogue.

If Moscow is to engage in a true partnership with NATO, it must stop its reckless and provocative military activities at NATO borders, including Russian military flights with switched-off transponders over the Baltic Sea (these threaten even civil aviation), violations of Turkey’s airspace, and massive military drills without first warning its neighbors.

Settling for less is not an option. It would open the door to repeating the same mistakes over and over again. The lessons of the 21st century are the same as those of 20th: An aggressor will only stop when it meets a principled and unified position. If Putin had met an unwavering response following his aggression in Crimea, residents of Donetsk and Luhansk would not be living in a state of war but in a democratic country — a far preferable situation, no matter how imperfect the state of that democracy.

A reasonable Western policy toward Russia should be based on what Russia does, not what it says. Terrorist threats or the need to solve migration issues shouldn’t lead us to turn a blind eye to Russia’s aggression and threats against its neighbors, its disregard for agreements and international law. No country should be allowed to cherry-pick which rules it will implement and which ones it won’t, at the expense of the sovereignty of other nations and international peace. Dialogue can only yield results if it is truly constructive and does not attempt to undermine diplomatic and democratic principles.

If Russia intends to use dialogue with the West as a platform for propaganda, then meeting Russian officials is no more useful than watching Russia Today TV — a Kremlin-funded TV channel that should be called Russia Yesterday for its glorification of the Soviets and Cold War era. Holding meetings for the sake of meetings is worthless. Russia needs to prove, through action, that it is truly ready for dialogue.