(1)
EN.DELFI
aA
The terrible Soviet crimes against occupied Baltic nations and ignorant attitude towards history were discussed and broadcasted to a wide international audience on Thanksgiving. The programme on CNN was about insensitivity showed by Jeff Bezos and his Amazon Inc. to millions upon millions of Soviet crimes victims and their descendants. The #WhyNotSwastika campaign started after the Baltic States’ people discovered that the most popular American retail companies are selling goods with Soviet symbols. Some responded to it but the retail giant Amazon has ignored this plea so far. 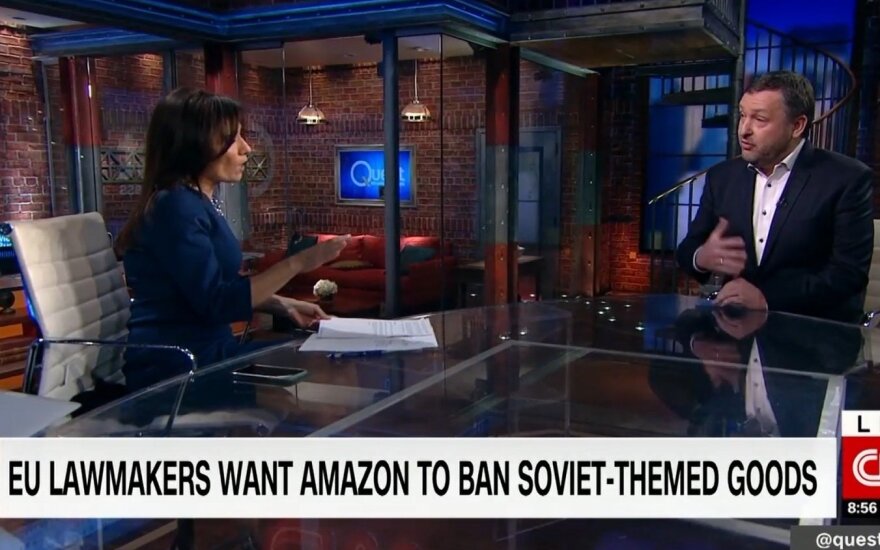 The Lithuanian Member of European Parliament (MEP) Antanas Guoga recently initiated a letter to the CEO of Amazon Inc. Jeff Bezos asking to cease sales of goods with Soviet symbols. The letter was signed by 27 Members of the European Parliament from 13 countries. The notion was also approved by millions of CNN viewers who watched International Quest Means Business with MEP Antanas Guoga during its Thanksgiving Day episode on the eve of the international discount day – Black Friday, on November 22.

The issue was brought to life during a popular CNN International show Quest Means Business with some 373 million viewers across the world. "For us, Lithuanians, it is especially important to remember the struggle for freedom. We were the first country to declare independence, having fought not only for ourselves, but all others. To us, the hammer and sickle symbolises oppression and deportations. Across Europe, more than 60 million people were directly hurt. People were murdered, deported to Gulags, to Siberia. We are hurt that Soviet symbols are placed on children's toys, teddy bears and sold to children," the Lithuanian politician said, answering CNN Business journalist Paula Newton's question, why it is so important that goods with Soviet symbols would be withdrawn from sale on the internet sales platforms.

According to A. Guoga, there isn't a single family, which would not have been touched by Soviet terror. "It has touched me personally, my family. Our entire region suffered. It is very hurtful for us," the MEP said on the CNN show. His grandmother's brother was the commander of the Prisikėlimas district, partisan Juozas Paliūnas-Rytas. The politician reminded that the European Court of Justice has banned registering Soviet symbols (the hammer and sickle) as commercial trademarks in the European Union because it opposes public morals and hurts the citizens of member states.

With Americans across the world celebrated Thanksgiving, the Lithuanian politician used the opportunity to thank the US retail giant Walmart for withdrawing Soviet symbols from sale. He also urged Amazon Inc. chief Jeff Bezos to take heed of millions of Europeans and Americans, who stem from Eastern and Central Europe, their painful history. A. Guoga stated he believes that the platform's chief is simply not informed of these goods, stating, "I flew especially in today to New York to ask him "Can you consider, can you consider if these items are appropriate for the public to buy when it's so hurtful to so many people in our region? When it's so important to stop this sort of campaign?"

The MEP reminded that Russian citizens also greatly suffered from Stalin's repressions, the cruelty of the entire Soviet period. "This initiative is not against Russia. It is a campaign against the ideas of Soviet cruelty. The hammer and sickle are a symbol of authoritarian rule. The Russian people also fought against it. And the efforts of the makers of these goods to state/imply that what Stalin did was great, that what the regime did was great is untrue and hurts us," he emphasised. However, the Kremlin regime is seeking to rehabilitate the Stalinist regime's atrocities using those very symbols.

During the interview with A. Guoga, millions of CNN's viewers could vote on the network's website on whether Amazon should stop selling Soviet themed merchandise. The results displayed at the end of the show were that 59% of viewers agree that goods with Soviet symbols should be withdrawn from the online sales platform.

CNN International invited Lithuanian politician A. Guoga to the business show Quest Means Business having noticed the letter of 27 parliamentarians prepared at his initiative and addressed to the online sales platform's chief Jeff Bezos. According to the MEP, he was spurred to action by the constant watch of social media and online portals by Lithuanian "elves". Having urged, alongside Lithuanian ambassador R. Kriščiūnas, retail giant Walmart to withdraw goods with Soviet symbols based on the hashtag #WhyNotSwastika, they now actively invite Amazon Inc. It must be noted that this plea was addressed to the both retail giants at the same time. Walmart have heard it, Amazon have not.

The address initiated by A. Guoga to Amazon Inc. chief Jeff Bezos was signed by 27 MEPs from 13 countries, who represent the six largest political groups, among them – representatives from Latvia and Estonia. At the same time, the European Commission was called upon to explain, what steps the institution is taking to strengthen EU citizens' awareness of totalitarian regimes' crimes performed in Europe. Unfortunately, Jeff Bezos, and his Amazon Inc. have chosen to ignore the Members of the European Parliament, the state institutions and the millions of those who suffered from the Soviet regime.

At the initiative of MEP Antanas Guoga , 27 MEPs have called on the CEO of Amazon Inc. Jeff Bezos in...

Lithuania's ambassador to Germany says he was unpleasantly surprised to see a demonstration featuring...