Ludo Segers | the Lithuania Tribune
aA
Former Georgian president Mikheil Saakashvili, who is visiting the US capital, spoke on Monday evening in the Lithuanian Embassy in Washington, DC. Mr. Saakashvili spoke at the invitation of the New International Leadership Institute during an event hosted by Ambassador Žygimantas Pavilionis. 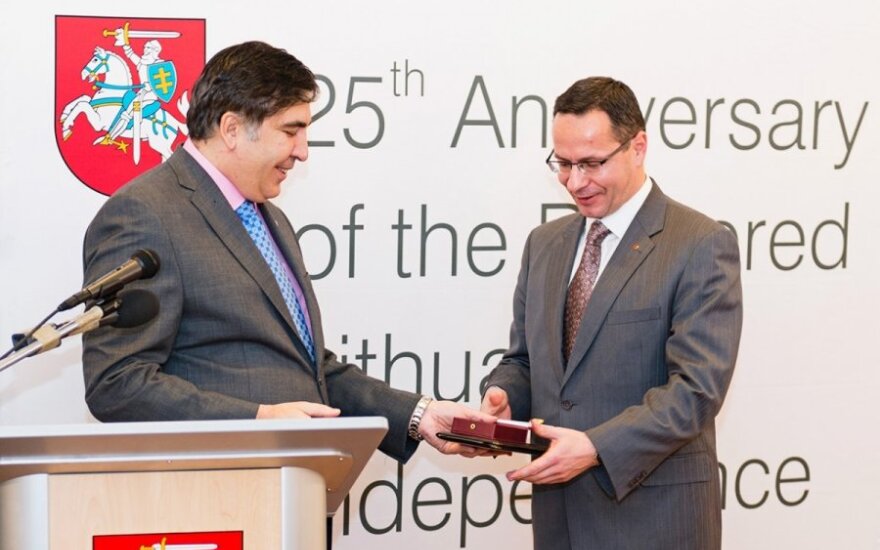 During the Russia-Georgia war in 2008, ambassador Pavilionis led an inter-ministerial working group responsible for the coordination of Lithuania's support for Georgia. This came in the aftermath of Russia’s aggression and seizing 20 percent of Georgian territory. In 2008, Lithuania was the only EU and NATO member state that opposed the return to ‘business as usual’ with Russia.

In his opening remarks, Ambassador Pavilionis welcomed Mr. Saakashvili and said: "It is time to unite inside the West and to learn from past mistakes and build a clear, long-term strategy towards Europe's East and to stop Putin decisively.” He added: "Putin tries to divide as a rule. Divided we fall, united we stand." He recalled the statements made in 2008 about the return to ‘business as usual’, describing them as the ‘Munich agreement of the 21st Century’. He then warned that Russia would continue its aggression. "Then nobody wanted to listen,” Ambassador Pavilionis said, "now they have finally realised.”

Former Georgian Ambassador to the US, Mr. Temuri Yakobashvili who is now president of the New International Leadership Institute, introduced President Saakashvili. "This is a timely visit of the former President of Georgia who is now Chair of the International Advisory Council on Reforms, appointed by Ukrainian President Poroshenko assisting Ukraine in implementing tough economic and rule-of-law reforms.”

In his new advisory role, Mr. Saakashvili has clearly some excellent insights in the present situation in Ukraine. He said, "The future of Europe is being decided and our common values are under attack.” Mr. Saakashvili sees several potential outcomes for the conflict in Ukraine as Russia continues its war and efforts to weaken the country.

One outcome would see application of a ‘Berlin sector’ approach, dividing Ukraine in a Russian and a Western part. Another move would see Eastern Ukraine physical connected to Crimea and Moldova’s Transdniestria breakaway region. Ultimately, Mr. Saakashvili sees Putin trying to weaken and overturn the present government in Kiev. As the rebels in the East push on, Mr. Saakashvili urged the West to supply precision weapons to Ukraine.

Meanwhile Russia’s war effort is combined with an all out effort to spread propaganda and Mr. Saakashvili suggests basing a major Russian language TV station in the Region to counter this ‘soft approach’ propaganda. He said, "a French TV advertising executive told him that every 2 weeks Russia Today’s executives get together for a number of hours and decide what the ‘news’ will be for the next two weeks.” It has become clear to those that track the propaganda that on several occasions Putin uses this to test his ‘ideas’ before proceeding with actions on the ground.

Mr. Saakashvili described Putin’s Russia as a much more dangerous opponent to the West than the former Soviet Union. In the latter, a Politburo decided about the course of action. Now the West deals with an unpredictable and unreliable individual. To underscore this, Mr. Saakashvili said during his Presidency, "Putin boasted during one of his meetings, prior to the Russian invasion of Georgia, that he was sure that NATO would not come to the rescue of the Baltic States if he decided to attack them.”

The evening ended on a musical note with the famous Georgian pianist, Khatia Buniatishvili playing a very impressive set of classical works.

Mr. Saakashvili was President of Georgia from 2004 to 2012. He is presently professor and senior statesman at Tufts University in Medford, outside Boston. Mr. Saakashvili moved to the USA in 2013 after his eight years in office. In 2015, former president Saakashvili became the chair of Ukraine's International Council for Reforms, an advisory body tasked with working out proposals and recommendations of reforms in Ukraine based on best international practices.