Marshall plan for Ukraine: What should be done a year after Maidan?

Ramūnas Bogdanas
aA
The new Ukrainian Government has been appointed one year after the Euromaidan revolution began in Kyiv. In November 2013, those who felt mostly betrayed by President of Ukraine Viktor Yanukovych crowded in the Maidan of Kyiv. 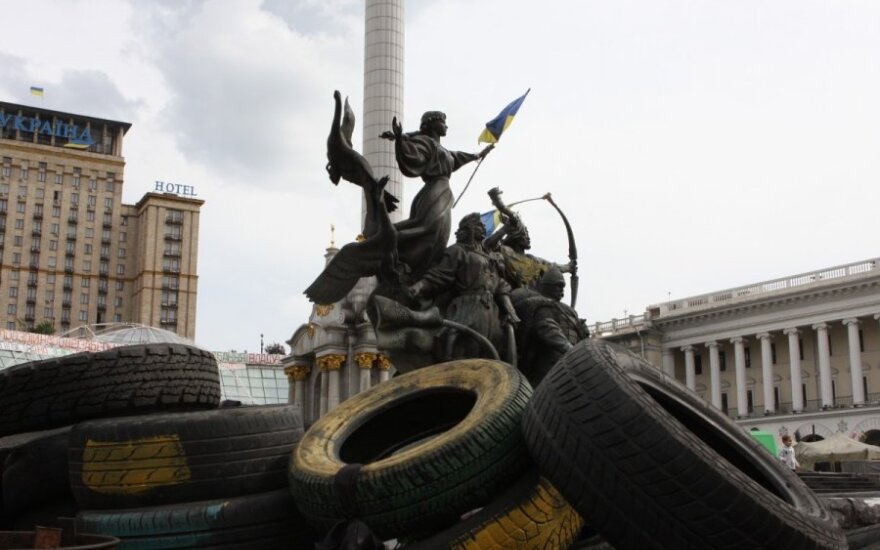 The number of active protesters had been diminishing day by day but on Friday, 29 November, around 10,000 people gathered in the Independence Square, or the Maidan. A few hundred stayed there over the night, mostly students. In the early hours of Saturday they were attacked by the special unit Berkut who completely disgraced their name after killings of protesters several months later.

The crowd was retreating across the square towards the cathedral of St. Michael and the monastery. This is where the square ends, and two streets run around both sides of the complex. The sobor and the monastery look like an iceberg: if people strike against the surrounding wall, the crowd would dissolve and flow down these two streets. But probably Berkut had a task not only to disperse the crowd but also “to teach a lesson”. Making a crescent formation - so nobody could escape - they pushed the protesters against the wall and started beating them heavily. The wounded people were looking for shelter in the monastery.

Such behaviour of the government triggered a new wave of protests which was much stronger. On Sunday, 1 December, around 500,000 people went to the streets in central Kyiv. Their dignity could not put up with humiliation anymore. One of the leaders of the opposition Arseny Yatseniuk publicly demanded the government to step down, the slogan “Ukraine is Europe” was in the air.

This is how Euromaidan began, spelling the end to Yanukovych who soon fled the country. On the way out he stopped in Kharkiv, were probably he had to announce the separatist East Ukraine but didn’t dare, and he didn’t show up in the hall in front of the assembled supporters.

Russia took advantage of the mess and of its agents in the Ukrainian army, and took over Crimea without resistance. Then it turned its glance towards Donbass. The battle for Ukraine is going on until now, and it is a furnace that is forging the Ukrainians into a political nation.

Ukraine had to pay high price for realizing at last that it is not an annex to Russia but rather a sovereign state. The price had to be paid because of, on the one hand, the imperial ambitions of Russia, and on the other hand, more than 20 years devoted not for establishing the state but for creation of oligarchic clans.

After the Orange revolution of 2004, it became obvious that the country was not ready yet, that it lacked the critical mass of citizens and politicians who would make a turn away from regular corrupted ties towards new European standards. Ukraine had to continue to sink before a will to live differently was born. Yanukovych did his job in making the country hit the bottom under his regime, and the resistance engine was started which geared Ukraine in the opposite direction.

Having sunk deep, Ukraine took-off from the bottom. During the last year it proved with blood that the way back is not Ukraine’s way, though Russia tries to push it back. Democratic elections of the president and parliament took place, and the pro-western governing body was formed.

A rope for the West to hang itself

In the course of the last year, the West has tried to stop Russia’s aggression by diplomatic means and sanctions. The symbol of resolve for France turned out to be the contract of two Mistral class helicopter carriers for the Russian navy. One of them, Vladivostok, had to be delivered this November. The French found an elegant formula: “Circumstances do not allow the delivery.”

The circumstances in question are the aggressive actions of Russia. Imagine what a blow would it be on the reputation of France if the French-made ship were used to guard the beaches of the annexed Crimean Peninsula, or even participated in the possible offence on the Ukrainian port of Mariupol? The Russian ground forces have already tried to attack Mariupol, and the Ukrainian military boat was drowned near the port. Nobody would trust Russia’s promises not to station these vessels in the Black Sea. Especially when the second one, due for delivery in November 2015, is named eloquently, Sevastopol.

And who would take it easy if these assault ships, made by France and with a Russian flag, sailed into the Baltic Sea to demonstrate force at the shores of France’s NATO allies? The delivery of the Mistral ships is only the top of the iceberg, and at the basis lies close cooperation of French company Thales with Russia’s military industry. The exclusive devices stolen last week from Vladivostok were produced by Thales. The Russian Su series fighter would be blind without optics made by this company. The targeting pods Damocles are used in Russian tank T-90, attack helicopter Ka-52.

By involving Western companies into strategic cooperation, Moscow is following the old motto of Stalin: “We shall hang capitalists on the rope which they themselves shall produce for us”.

In this regard, it is worth remembering Christophe Margerie, the CEO of French oil company Total, who died in an accident at Vnukov airport in Moscow. He had huge plans of investing in the Russian oil industry, despite the official position of France. Why should he? When Total was making money in Myanmar, financially supporting military junta, the French government was protecting the business and vetoing EU sanctions on Myanmar in oil and gas sectors.

We also have French Renault Trucks Defense, Italian Iveco, and smaller producers of the rope. But it seems the situation is starting to change. The tone is set by German Rheinmetall which quit with the construction of the modern military training centre in Russia.

Negative action alone is not sufficient for Ukraine to follow the European path it has chosen. As the French philosopher Bernard-Henry Levy said this October, “Punishing the aggressor is good, but helping the victim is better”. If everybody now keeps on sitting and waiting until sanctions make Russia change its mind, Ukraine can turn into an irredeemable case during that time. While the fat get slender, the slender shall die of hunger.

Back in March 2014, just after Janukovych fled to Russia, the renowned financier George Soros said that Ukraine needed a new Marshall plan. The original one was developed to reconstruct Germany after the war, and lasted until 1951. Starting with food and fuel, later it covered industrial investment and in the end it laid foundations for the EU. It is worth bearing in mind that Germans at that time deserved much worse attitudes than contemporary Ukrainians who are fighting for their European way.

Because of corruption and ineffective legislation Ukraine has turned into a state of feudal capitalism where oligarchs rule provinces like medieval dukes. Ukrainians are not just the victims of foreign aggression – they are the victims of their own inaction. Now they pay the price for drowsing away all the chances since 1991. If the present opportunity is not exploited, another one shall come in the future, but it will be even harder.

The mintage plan for Ukraine

To make a plan for Ukraine, one needs to tick several boxes: (A) the financial source, (B) sectors of priority, (C) efficient supervision of aid. The latter is important because corrupt relations and incompetence are able to destroy any flow of aid.

It seems that Mr Poroshenko and Mr Yatseniuk realize this, as three foreigners have been proposed as ministers: Natalie Jaresko of the USA - the country behind the IMF help - for finance, Alexander Kvitashvili of Geogia - country with much reform experience after the Rose Revolution - for healthcare, Aivaras Abromavičius of Lithuania - currently the EU's fastest-growing economy - for economy. So Ukraine signals that it is ready to implement part (C).

Priority sectors could be defined jointly by the donors and Ukrainian authorities. It is very important not to turn the rescue plan into the plan for Western companies to soak up the aid money, when the aid fund covers only consultations and advise which cannot be realized without investment, and there are no finances left after the consultants are paid.

We have experienced such a faulty trend of aid in Lithuania after 1990. That is why point (A) marks the source – it depends on the amount of money in the fund if the sum is sufficient to materialize the endeavour.

On 14 November, the Foreign Affairs Committee and The European Affairs Committee of the Lithuanian parliament passed a resolution on Ukraine, which proposes how to create the fund. The idea was born in the head of former conservative prime minister Andrius Kubilius, and it was supported by the committees, chaired by social democrats Benediktas Juodka and Gediminas Kirkilas respectively. It is very important to have a united position of the political elite on such issues both on the national and on the EU level.

The Lithuanian resolution, which is posted to certain institutions around Europe, proposes to allocate 3% of the EU budget for Ukraine’s European fund, and that makes 30 billion euros. According to Ukraine, this sum is sufficient to irreversibly turn the state towards Europe, if the funds are used properly. That would be the task of experienced Western specialists.

The result shall be Ukraine in Europe, and we would be joined by 45 million inhabitants from rich lands in the East. At the same time, it would provide impetus for Russia to change just like Ukraine did. The change is what Mr. Putin is afraid of, but only such a change is able to bring security for Europe and prosperity for ordinary Russian people.

In March 1939, Stalin explained in the 18th Congress of the Communist Party that the party’s foreign policy goal is “to stay careful and do not allow our country to get involved into conflicts by war provocateurs who are used to poking embers with the hands of others”. In October, he was already dividing Poland between himself and Hitler, in November he attacked Finland.

In November 2014, Mr. Putin explained in an interview: “We do not threaten anybody and we are not to be dragged into any geopolitical games, let alone conflicts.” You know what is going on in reality. To respond to aggression by building would be the most proper step for Europe.