(1)
Monika Garbačiauskaitė, from Washington, D.C.,
DELFI EN
aA
“The Baltics are unified and strong. I was completely fascinated to read about the Lithuanian steps in securing energy independence through the national natural gas terminal. I think that is amazing, I congratulate Lithuania for taking the step,” said former US Secretary of State Madeleine Albright in an exclusive interview to DELFI. 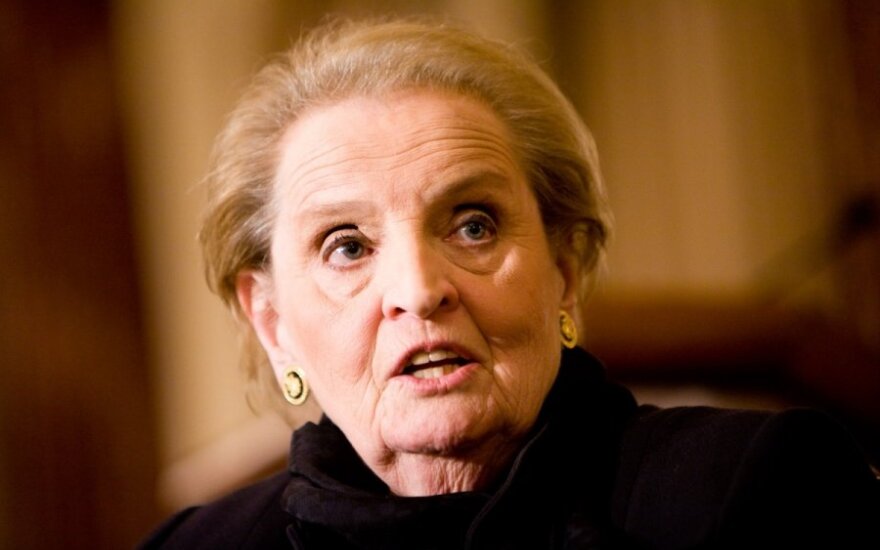 As America’s first female secretary of state, Ms Albright ran Washington’s foreign policy under President Bill Clinton between 1997 and 2001. She currently teaches at Georgetown University and is still an influential figure in US politics, serving as chairperson of the National Democratic Institute for International Affairs.

What is your take on the situation in Ukraine following general elections? Have the US and other Western countries done enough to support this country in its struggles?

I think that the Ukrainian people should be very pleased with the elections, because they were well-run and successful, they conducted the campaign and the whole thing was done very well, with the international monitoring organizations assessing that they have been largely in line with international standards.

Ukraine is in the middle of a very difficult process, of trying to make sure that they have a democratically-elected government and that they also are able to deal with their economic and security situation. I think Americans generally are prepared to be helpful in a number of different ways.

Should the US supply weapons to Ukraine? From what I’ve heard, you are not in favour of such an option.

As I understand it, there is a new defence minister in Ukraine, Stepan Poltorak, and our Secretary of Defense Chuck Hagel spoke with him about ways to cooperate more and asked about security assistance that the United States can provide. I think that the American people as well as our government are very much aware of the complicated situation that the Ukrainians are facing in eastern Ukraine and that they need support.

Speaking of people’s support, a Pew Research Center poll last year found that 52 percent of Americans think that the United States should “mind its own business internationally and let other countries get along the best they can on their own.” Is the US giving up its role as the world’s policeman?

The United States people and the government, when I was in it, we didn’t want to be the world's policeman. What is very important for the United States is to always be engaged and take the lead and work with other countries in order to deal with a variety of international issues.

It’s a complicated situation but I think that one has to understand that Americans don’t want to be the only policeman, that we want to cooperate with others – and that is definitely true as far as Ukraine is concerned. Not that we have stopped being number-one world power, but there are other powers that we want partnerships with.

Russia has launched a propaganda offensive against its neighbours, including the Baltics, and it is a big challenge. Do you think the US might have neglected these processes?

I think people are really surprised, I know I am, at the level of Russian propaganda that sounds like something out of the Soviet Union and the height of the Cold War.

It is a big mistake when the leader of a country lies to his own people as well as to the neighbours. The way that President [Vladimir] Putin is treating the intelligence of his own people is stunning to me, in terms of just making up facts.

The US is very involved in public diplomacy and dealing with this particular issue, but I think it is shocking. I have at various times watched Russian TV and its flat-out lies show disrespect for the Russian people and everybody else.

What kind of future is Putin carving out for himself with such lies? Where will this take the country?

The truth is that nobody knows. These are Pyrrhic victories, very short-term, he is leading his country in the wrong direction. It's very dangerous for leaders to make up things. It stuns me the kinds of things that he has said, that the dissolution of the Soviet Union was the biggest tragedy of the 20th century. How can somebody who knows about two world wars in which millions of Russians were killed say they were not a greater disaster than the dissolution of the Soviet Union? That is a sign that he is living in a parallel universe. It is dangerous and I feel sorry for the Russian people who deserve better leadership.

Should the Baltic states be fearful for their own security? Is intervention a realistic scenario?

I think the Baltics are unified and strong. I was completely fascinated to read about the Lithuanian steps in securing energy independence through the national natural gas terminal. I think that is amazing, I congratulate Lithuania for taking the step.

The Russians can threaten in terms of control of energy, but the Lithuanians have really guaranteed themselves a way of having their own source. It is absolutely brilliant and will make a big difference.

Putin is going to constantly work at destabilizing his western border to keep everybody – Moldova, the Baltics, even Poland – uncomfortable. We all have to make very clear that is unacceptable, work together through NATO and the European Union to push back.

Was the message sent from the NATO Summit in Wales strong enough?

I think it was a good message, there was a sense of unity and of understanding the responsibility of developing this joint task force, working in prepositioning and moving forces around, making clear about NATO commitments.

Going back to the Ukraine issue, do you think that major EU powers, like Germany and France, have been assuming sufficiently strong positions?

What has been very interesting is that in many ways Putin accomplished the opposite of what he wanted, he's gotten Europe united. There is support for the sanctions and, frankly, I can understand how difficult it is for European countries, but there is unity.

Every country has its own political situation, but I think Putin has done the opposite of what he wanted. There has to always be continued vigilance, working to keep the unity together and understanding that these are complicated situations. So I think that the EU has behaved well.