BNS
aA
Monday marks a year since the first round of Lithuania's parliamentary elections. BNS provides an overview of the key decisions taken by the new parliament, as well as the scandals it faced and the challenges it will still have to cope with. 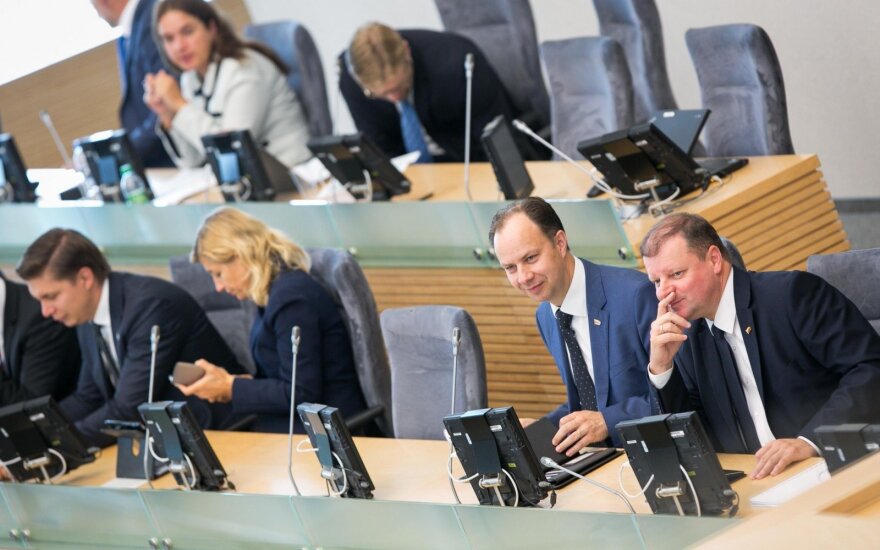 The Seimas tightened control on alcohol in June – starting next year, Lithuania will impose a full ban on alcohol advertisement, it will only be sold to buyers over the age of 20 and alcohol sales hours will be made shorter. A decision on specialized stores was postponed.

In July, the parliamentarians paved way for restructuring or the forestry sector – management of state forests will be centered in a single company. Implementation of the reform will depend on the government's decisions.

After some amendments, a new Labor Code stepped into force in July, making it easier to dismiss employees.

The parliament imposed a ban on physical penalties for children in February, endorsing a reform of children's rights protection in September.

The Seimas also stepped up involvement in NATO, ratifying a treaty on presence of US troops, increased the defense budget and should shortly endorse dispatch of troops to the Middle East.

Impeachment was initiated against Social Democratic MP Mindaugas Bastys over shady ties with Russia. A conclusion from the Constitutional Court is expected.

MP Kęstutis Pūkas was charged with sexual assault. Prosecutors have turned to the Constitutional Court, he may lose his immunity to be prosecuted.

The parliament's Anti-Corruption Commission has opened a scrutiny into Social Democratic MP Artūras Skardžius' family energy interests and a possible conflict of interests.

The relationship between Ramunas Karbauskis, the leader of the Lithuanian Farmers and Greens Union, and the party's member Greta Kildisiene was in focus of media attention for a long time until she gave up her MP mandate.

After some of the Social Democratic MPs decided to leave the coalition, the Farmers and Greens Union may face the challenge of security support to key decisions.

Politicians are under growing pressure to take a resolute tax reform to cope with the enormous social inequality.

In June, the parliament endorsed an abstract plan on university restructuring, however, an actual reform is not possible until specific decisions and amendments.

In light of the Constitutional Court's findings and expectations of emigrants, Lithuanian parliamentarians will have to decide on expanding dual citizenship and non-Lithuanian characters in ID documents.

The parliament should shortly start discussing the reform of public service, however, a draft provided by the Interior Ministry is already under heavy criticism.

PM fires back at President's criticism of government

MP Gintaras Steponavičius is withdrawing from the Lithuanian Liberal Movement and its political...

Social Democrat rebels are not yielding