BNS
aA
Lithuania's law-enforcement conducting a probe into corruption by MG Baltic concern and a few political parties say that the expanded suspicions against the Liberal Movement are final. The party's acting leader Eugenijus Gentvilas says the broader suspicions have to do with the upcoming election for new chairman. 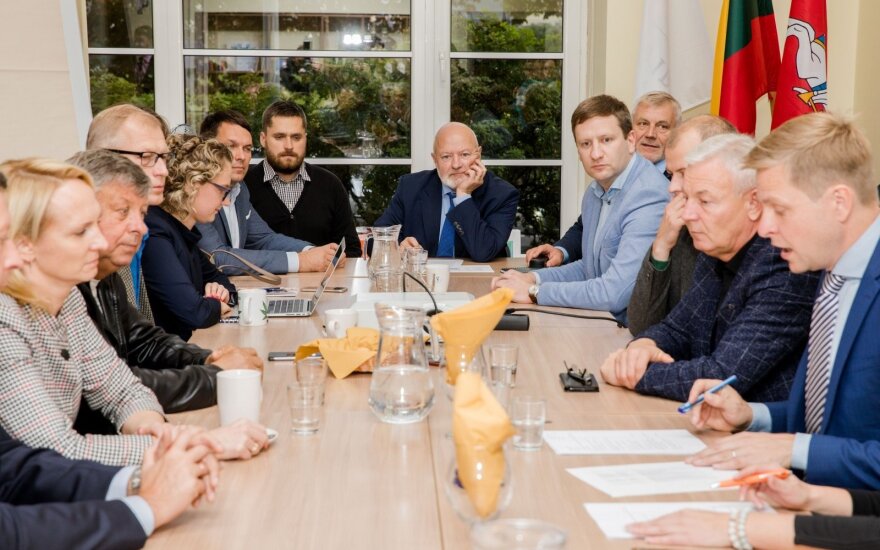 At a meeting of the Liberal Movement
© DELFI / Karolina Pansevič

"The political party, the Liberal Movement of the Republic of Lithuania, has been presented the final report of suspicions against a legal entity updated with new episodes," the Special Investigations Service (STT) said in a response to BNS.

The agency refused to specify the planned duration of the probe, also refusing to elaborate on the content of the expanded suspicions, while the Liberals say they had to do with abuse by another suspect, Gintaras Steponavičius who has left the party.

Now the party stands suspicions of all three crimes.

The Liberal Movement disagrees with the suspicions, saying it is specific persons who should be held responsible, not the organization that used to unite them and did not provide them with any authorization. Such argumentation has been provided by another party suspected in the probe, the Labour Party that is suspected due to the actions of its former member Vytautas Gapšys.

MP Gentvilas, the Liberal Movement's acting leader, suspects the suspicions could have been expanded consciously ahead of the next week's congress that will elect a new chairman. In an interview to Žiniu Radijas news radio on Friday, he stated that "the law-enforcement is playing games."

"On Saturday, June 11 last year, we had a congress of our party. So it was exactly on Friday, June 10, that they conducted searches at Steponavičius', Rimantas Mikaitis' who were eliminated from political institutions the following day at the congress," said the politician.

"I don't know there may be some procedural things, (…) but there is a certain degree of uncertainty: is there no manipulation, when it comes to interference in political processes within the party and among parties," Gentvilas said.

In his words, the party's lawyer has not yet been granted access to the pre-trial investigation materials, which are available to unauthorized persons.

"I hear from various sources that people know the conversation records and pre-trial investigation materials," said the Liberal.

"If this turns out the case, I would say journalists probably didn't go to the prosecutor's office to steal it. (…) Someone got it there and transferred," he said.

Prosecutors suspect the two former Liberal MPs, Masiulis and Gustainis, took bribes from MG Baltic vice-president Raimondas Kurlianskis for the benefit of the Liberal Movement. The businessman is also suspected of bribing Gapšys.

The authorities have said that Steponavičius had discussed MG Baltic support to two of his NGOs.

According to the law-enforcement, the politicians voted for legal acts benefiting the concern in exchange for the bribes.

All of them deny the suspicions.

The Lithuanian Liberal Movement will not be eliminated and will continue operations, with the new...