BNS
aA
Lithuania's Interior Minister Eimutis Misiūnas has pledged to look into the reasons why the police was notified about the allegedly drunken condition of MP Linas Balsys after he had already left the parliament building by car, also planning to find out why the security let him leave. 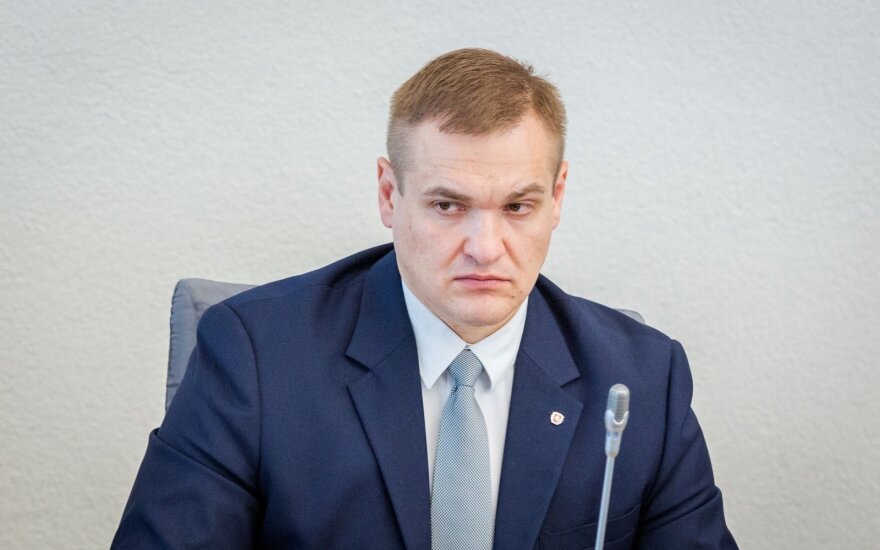 "I cannot comment on why the VIP protection people only reported it 20 minutes later. Maybe they were not certain or possibly did not see clear signs, maybe they didn't read the media. However, if they were certain (about his drunken condition), they should not have let him, regardless of the MP immunity. We will look into this to find out whether they lacked information, whether they did not know," Misiūnas told journalists at the parliament on Thursday.

Earlier on Thursday, officers of the VIP Protection Department reported to the police that MP Balsys had left the parliament by car in what appeared to be a drunken condition.

Paulius Radvilavičius of the Vilnius police said a report had come in at 12:12 p.m. about Balsys having left the parliament building in central part of the city in his VW Caddy shortly before noon.

Balsys, the leader of the Lithuanian Green Party, agreed to blow into a breathalyzer device when asked to by journalists, producing a reading of 1.82 per mille of alcohol.

Prime Minister Saulius Skvernelis dismissed the situation as intolerable, if the MP had indeed been drinking and driving. In his words, impeachment cannot be ruled out.

"It is intolerable and incomprehensible for a man to come to work in a drunken condition, especially when it comes to a member of the Seimas," Skvernelis told journalists at the parliament.

Lithuanian MP Balsys suspected of being drunk in parlt, police may be called in (Updated) (1)

The leadership of the Lithuanian Seimas want to call the police to the parliament building in Vilnius...

The ruling Lithuanian Farmers and Greens Union has initiated impeachment against conservative MP...

Embattled MP Balsys under care of doctors, his family - statement

Linas Balsys , a Lithuanian lawmaker who appeared to be drunk when he left the parliament building in...

Vilnius police on Monday opened a pre-trial investigation into suspicions that MP Linas Balsys was...

Lithuania's law-enforcement have dropped the investigation into the allegations that MP Linas Balsys...

Lithuanian MP Linas Balsys has returned to work after a break of over a month, saying that he has...