BNS
aA
Lithuania's defense budget is projected to reach 2.01 percent of GDP next year, according to a draft plan released on Tuesday. 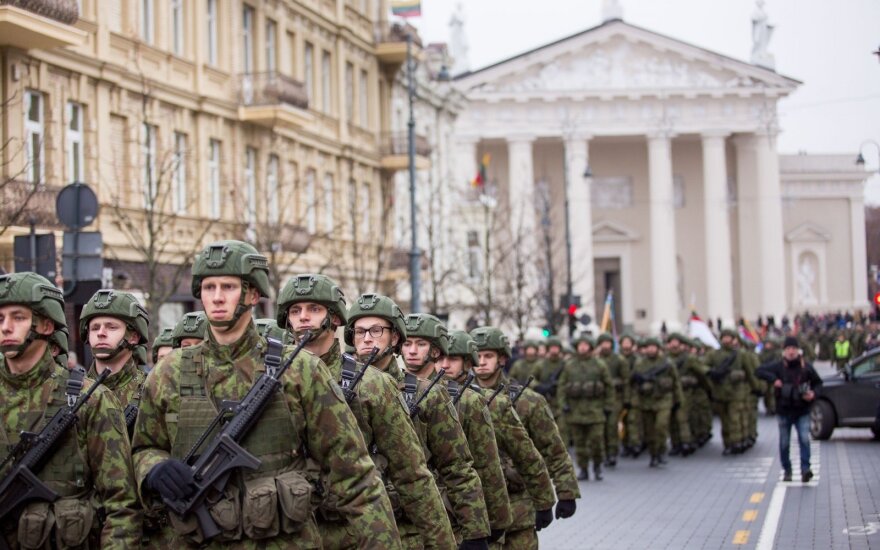 "The bill provides for allocating 2.01 of GDP for national defense. The estimate is based on the Finance Ministry's updated 2019 GDP projection and the OECD forecast," a Finance Ministry spokeswoman told BNS.

The Lithuanian State Defense Council last spring proposed to increase defense spending to 2.05 percent of GDP in 2019. The council is chaired by President Dalia Grybauskaitė and also includes the prime minister, the speaker of the Seimas, the defense minister and the chief of defense.

Related articles
Ušackas plans to seek establishment of US army base in Lithuania
Fake news and resilience to Russian disinformation: NATO deterrence and stability in the Baltic region

NATO requires each member state to spend at least 2 percent of its annual GDP on defense, but most European countries fail to meet the target.

Lithuania's budget earmarks 873 million euros for defense this year. It was estimated last year that the amount would account for 2 percent of GDP, but it remains below that mark due to the country's faster-than-expected economic growth.

The government plans to borrow funds to meet NATO's 2 percent of GDP spending target by the end of this year, but it has not yet received the go-ahead from the parliament.

Prime Minister Saulius Skvernelis assured members of his Cabinet on Tuesday that the 2018 defense budget would be increased by 18 million euros.

"We'll have an intervention into this year's state budget to ensure that our national defense system meets the 2 percent commitment. Almost 18 million euros will be allocated for that purpose," he said during the Cabinet's meeting.

Skvernelis said the non-compliance with the State Defense Council's recommendation was due to the economy expanding faster than previously planned.

The State Defense Council and the majority of parliamentary political parties have agreed to gradually increase defense spending to reach 2.5 percent of GDP by 2030.

Ušackas plans to seek establishment of US army base in Lithuania

Ambassador Vygaudas Ušackas , a presidential candidate, plans to seek the establishment of an...

The Russian efforts to undermine stability in Europe has been in the news throughout the Western...

Lithuanian Prime Minister Saulius Skvernelis says that, at the moment, he does not back the idea of...