BNS EN
aA
Viktoras Pranckietis, the speaker of the Lithuanian parliament, and his Ukrainian counterpart discussed a proposed plan for EU financial aid for Ukraine, dubbed as "the new Marshall plan", as they met in Kiev on Thursday. 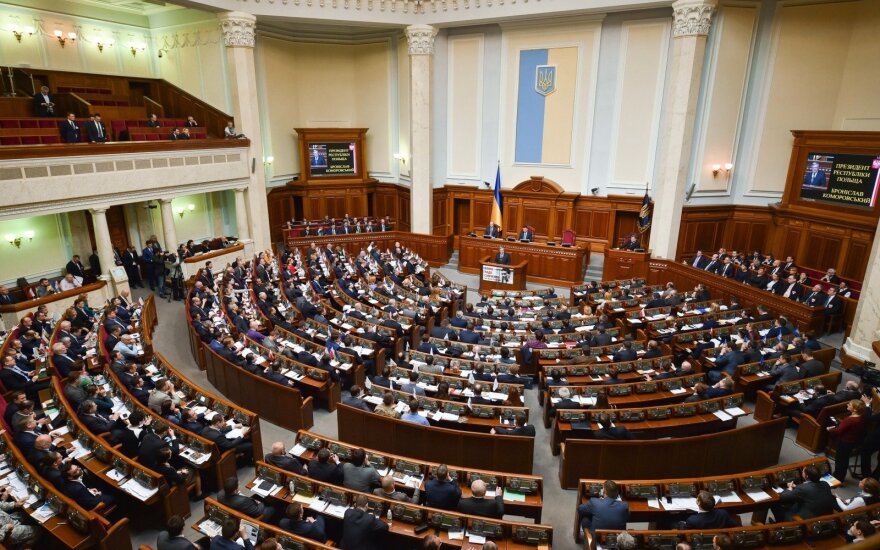 The initiative was raised last year by Andrius Kubilius, a former Lithuanian prime minister. Kubilius, together with Gediminas Kirkilas, another former prime minister and now deputy speaker of the Seimas, have visited major western European capitals to promote the plan. The initiative has also started to get attention from the Lithuanian government.

Pranckietis said after his meeting with Andriy Parubiy, the speaker of Ukraine's Verkhovna Rada, that "many countries already recognize this plan".

"We have to keep Ukraine in our pro-Western world and we must take measures to achieve this goal," he told reporters.

The Marshall Plan was a US program for aid to Europe during the Cold War. The program helped to rebuild war-torn Western European economies and thus make them more resilient to the influence of the Soviet Union.

Kubilius says that the EU's financial aid for Ukraine, which is currently at war, is as vital as the US money was for countries impoverished by World War Two.

Following the ouster of Moscow-supported Ukrainian President Viktor Yanukovych more than three years ago, Russia annexed the Crimean Peninsula and began to support separatists in the eastern part of the country.

"In the wake of World War Two, America made decisions to keep Stalin's domination from spreading in Europe. Likewise, today we do not want Vladimir Putin to dominate Ukraine," Kubilius told BNS.

"We want Ukrainian people to realize as soon as possible that their chosen pro-Western path is the right one," he added.

Although the prospects for the plan are still unclear, the Lithuanian government has engaged itself in the development of a financing mechanism. Officials from the government office and the ministries for foreign affairs and finance last week held a meeting on this issue.

It is discussed that the EU's investment plan for Ukraine's small and medium-sized businesses and critical infrastructure projects would last for ten years, with around 5 billion euros to be allocated annually.

Lithuanian officials expect to have a plan for aid to Ukraine ready by the EU Eastern Partnership Summit in November so as to raise this issue before EU leaders and try and find a place for it in the final declaration of the meeting.

Kirkilas, who heads the Seimas Committee on European Affairs, says that the mentioning of the plan in a document signed by EU leaders would give a mandate for the European Commission to begin developing specific instruments for aid to Ukraine.

"This would simply allow the European Commission to start working on this," he told BNS.

Kirkilas and Kubilius have presented the so-called Marshall plan for Ukraine in Berlin, London, Washington and Brussels. The politicians plan to return to Germany after the country's general election and to present the plan in Paris and Rome.

Lithuanian politicians and diplomats may have difficulty convincing their EU colleagues that funds granted to Ukrainian businesses will be allocated transparently, rather than ending up in the pockets of the country's oligarchs.

However, the Verkhovna Rada speaker downplays these concerns, saying that Ukraine has carried out a number of anti-corruption reforms, with some of them still ongoing.

"I believe we discussed everything together and we are ready to meet with those skeptical about this plan. We have to convince these skeptics and try to find allies among them, and I believe that we will be able to put this idea into practice," Parubiy told reporters.

His Lithuanian counterpart said that "Ukraine is making some steps" in the fight against corruption, but it still has "to do something extra".

"We are not teaching. We are just talking and raising problems. The country itself has to find solutions to these problems," Pranckietis said.

Ukraine has access to a credit line of 17.5 billion US dollars (EUR 14.7 mln) from the International Monetary Fund (IMF) and has to date received around 7 billion euros. The European Union has granted the country almost 3 billion euros in financial aid since 2014.

The Ukrainian economy is growing, but not as rapidly as it could. The World Bank says that growth is held back by low external demand and the costly conflict in the eastern part of the country.

Kubilius says that a financial injection for Ukraine's small and medium-sized businesses would give a boost to the economy.

"The strengthening of the middle class in Ukraine would bring great benefit to the economy and would be the best counterweight to the oligarchic structures," the initiator of the Marshal plan for Ukraine said.

A new radio transmitter was formally launched in Lithuania on Tuesday for rebroadcasting the Russian...