BNS
aA
Lithuanian's Permanent Representative to the UN Security Council Raimonda Murmokaitė on Wednesday accused Russia of seeking to legitimize its territorial gains in Ukraine, achieved by separatists after an official truce. 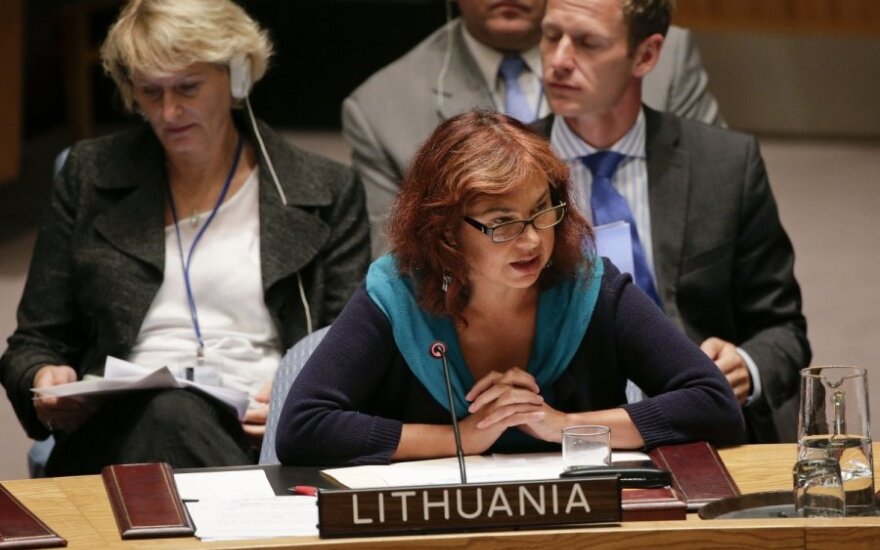 "Russia’s intentions to rewrite the Minsk agreements in a way that would legitimize and accept the territorial gains achieved by the militants speaks to Kremlin’s wholehearted support for those criminals," the ambassador told a meeting in New York.

According to the diplomat, receiving Russia's constant support, separatists benefited from the truce to strengthen their positions and captured additional 550 square kilometres of the Ukrainian territory between Donetsk and Mariupol.

During the meeting that was held on Lithuania's initiative, the ambassador also underlined that the existing crisis is not a civil war but "a foreign-sponsored war".

Murmokaitė also cited the information provided by Ukraine that separatists have more than 500 tanks, almost 700 artillery systems and a lot of other items of military equipment.

"How on earth - but for Russia’s continued supply - can a rag tag bunch of illegal militants obtain such an impressive arsenal of sophisticated heavy weaponry and arms which by now could well rival the arsenals of the smaller European states?" the Lithuanian ambassador said.

She reminded about attacks against Ukrainian troops during the truce when not only soldiers but also civilians were killed, as well as the Volnovakha attack when a rocket hit a bus, killing over a dozen civilians. According to the Lithuanian diplomat, Russia "has never even once condemned or disowned the illegal and lawless separatist militants".

Murmokaitė said that Lithuania rejects all calls to renegotiate the terms of the ceasefire agreement and urges all sides, Russia in particular, to engage and fully implement the Minsk accords in their entirety and without any further delay.

"If Russia is genuinely interested in putting an end to the devastating violence and deaths in eastern Ukraine, including the deaths of its own nameless soldiers sent to wage a war against a brotherly nation, it must stop destabilizing Ukraine, stop military supplies to its proxies, the illegal separatist groups, and withdraw all military equipment," she said.

The Lithuanian diplomat also called for immediate release of all hostages and illegally detained persons, including Ukrainian pilot Nadia Savchenko, and allow the entry of UN and OSCE observes to the whole territory of Ukraine, including Crimea.