Lithuanian soldiers see off third rotation of US colleagues

The third rotation of troops from the United States Army in Europe's 173rd Airborne Infantry Brigade were seen off at a formal ceremony held at Rukla garrison last Wednesday. After nearly two months of combined combat training, it will be replaced by the 2nd Squadron, 8th Cavalry Regiment, stationed in Texas, U.S.A., that will continue the joint training with Lithuanian forces, Lithuania's Ministry of National Defence said. 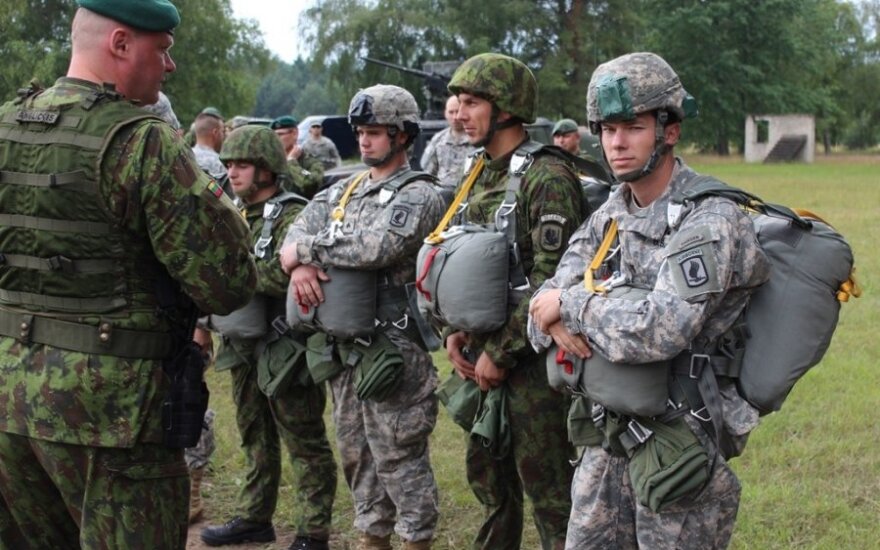 When bidding farewell to the outgoing U.S. soldiers, LTC G. Jurčiukonis thanked them for a sincere cooperation and the results achieved, and wished them luck in their future carriers.

The Lithuanian officer highlighted upon presenting remembrance gifts that the deployment of U.S. military personnel in Lithuania has been of essential importance not only for Lithuanian soldiers but for the entire society.

"U.S. military presence in Lithuania has enhanced the security of our country and demonstrated to the potential enemy the strength of the Alliance commitment to protect the Baltic States." Jurčiukonis said when wishing farewell.

The Commander of the company from the 2nd Battalion (Airborne), 503rd Infantry Regiment, 173rd Airborne Brigade, Captain S. Spiering presented a gift for the Lithuanian Land Force, thanked for the excellent conditions that had been ensured for training, and for the experience gained through joint service with Lithuanian soldiers.

The first 75 soldiers of the new 160-strong U.S. shift have been planned to arrive in Lithuania by the end of September. They will be deployed in Rukla like the previous rotations. The incoming shift will bring heavy combat equipment: seven STRYKER armoured personnel carriers, eight BRADLEY infantry fighting vehicles, and two M113 tracked armoured personnel carriers.

Allies have also increased the protection of airspace and sea of the Baltic region.