Lithuanian president's expectations in meeting with Obama: US military presence and shale gas

BNS
Lithuania expects American troops to stay in Lithuania and NATO to agree on additional measures to ensure the country's security, says a senior adviser to President Dalia Grybauskaitė as the Lithuanian leader prepares to meet US President Barack Obama in Tallinn. 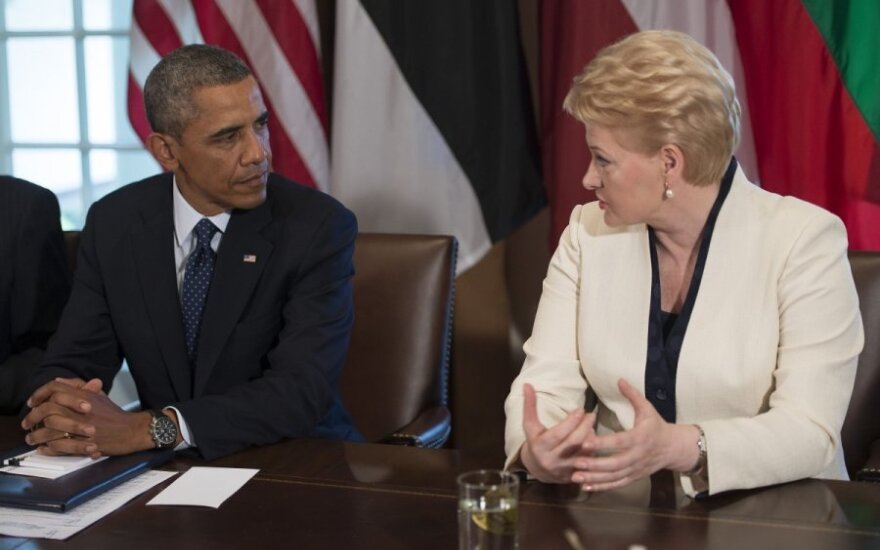 "The US support to Lithuania is particularly important now, when we see and comprehend the threats," senior foreign policy adviser Jovita Neliupšienė told BNS.

Neliupšienė says she hopes that the US Congress approves Obama's proposal to earmark 1 billion US dollars to additional security measures in Eastern Europe.

"We hope that US troops extend their presence in Lithuania. The US has shown initiative to expand the NATO air-policing mission. Most importantly, our contingency would be important to all members of the Alliance, especially the US," said the adviser.

Asked about the 1997 agreement with Russia, which stipulates that NATO cannot deploy permanent significant military capacities in new member-states, Neliupšienė said that Moscow itself breached the treaty, therefore, no commitments should undermine the security of NATO members.

"NATO member-states and Western countries are willing to stick to their commitments. Unfortunately, Russia is unwilling to observe these commitments. Therefore, it is very important to ensure that the commitments do not limit the possibility to defend the Alliance's residents and does not undermine their security," she added.

In her words, all elements of a country's contingency are important to Lithuania, including the Armed Forces, exercises and a shorter response time.

The United States have currently deployed 150 troops in the Baltic states, in addition to the same number in Poland.

Neliupšienė said the meeting of Baltic leaders and the US president in Estonia should also address Washington's plans to simplify shale gas exports, something that is of relevance to Lithuania as it seeks energy independence from Russia.

"We expect that the US decision is positive and we can expect shale gas exports to Lithuania in the nearest future," she said.

In the adviser's words, information security is another thing that is important to Lithuania, therefore, US is expected to "help outweigh the propaganda" from Russia.

Obama is due to arrive in Estonia on Tuesday evening. His agenda for Wednesday includes a meeting with the presidents of Lithuania, Latvia and Estonia. From Tallinn, the four leaders will leave for Wales, which will host a NATO summit until Friday. The summit should announce additional security measures for countries in Eastern Europe.

Estonia 's main policy objective at the NATO summit in Wales on Thursday will be the continuation...

US President Barack Obama is visiting Estonia and attending a NATO summit in Wales this week....

The Lithuanian Navy 's ship Kuršis will attend events of the NATO summit in Wales , the Defence...

About 150 signatories from Lithuania, Latvia and Estonia have asked US President Barack Obama to...