BNS
aA
Lithuanian President Dalia Grybauskaitė will make her decision regarding the appointment of Vice Minister of the Interior Giedrius Surplys, 37, for minister of agriculture shortly, her aid says. 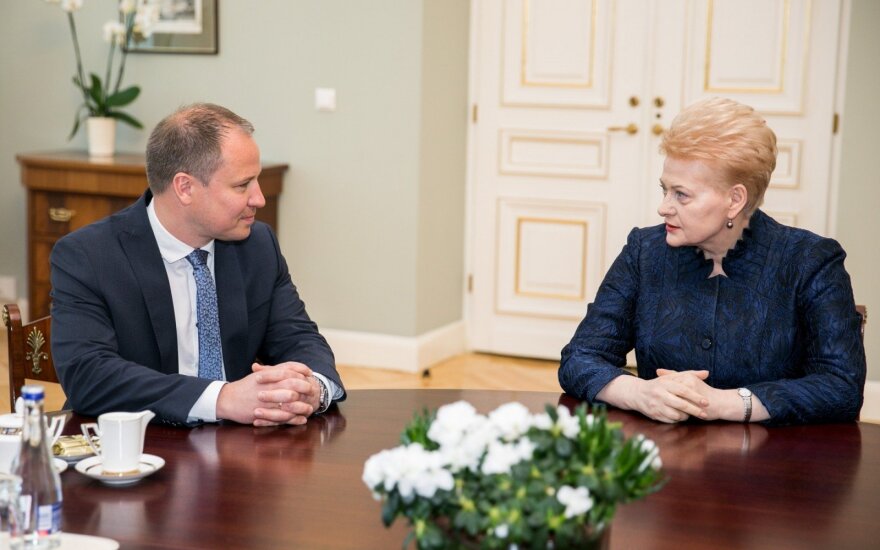 "The president will make her decision soon," Lina Antanavičienė said after the president's meeting with Surplys.

In the aide's words, the meeting mainly focused on negotiations on the harmonization of European direct payments to farmers, as well as on the consolidation of institutions under the Ministry of Agriculture or a review of their functions.

Surplys told journalists after the meeting that, if appointed, he would try to modernize Lithuania's agriculture and popularize living in the countryside.

"I'm a nanofarmer, living on eight ares of land, and this is my whole connection with the agriculture sector. But I do believe that a professional minister should, first of all, be a professional in the areas of management, diplomacy and politics," Surplys said.

Surplys served as Grybauskaitė's speechwriter until the start of 2017 when he assumed the position of a vice minister of the interior, and earlier advised former Foreign Minister Vygaudas Ušackas. He was on the Lithuanian Farmers and Greens Union's list of candidates during the 2016 Seimas elections.

Surplys studied political science in Lithuania and later studied diplomacy at the University of Birmingham in the UK.

He's been in charged of regional development, administration of EU funds, issuance of ID documents and migration at the Ministry of the Interior.

Agriculture Minister Bronius Markauskas stepped down after he came under criticism due to his family's farming practices. He will serve until June.

In Lithuania, ministers are appointed and dismissed by president upon nomination by prime minister.

Agriculture Minister Bronius Markauskas would have done less harm to his own reputation and to the...

Bronius Markauskas is stepping down as Lithuania's agriculture minister amid criticism over his...

Lithuanian President Dalia Grybauskaitė will not appoint Giedrius Danėlius , an attorney, as the...