(10)
DELFI EN
A Latvian journalist has felt the wrath of the Lithuanian president after asking several questions that "have not been agreed upon". The president insistently, and rather gracelessly, refused to answer questions about gay rights in Lithuania, a supermarket roof collapse in Riga and basketball. 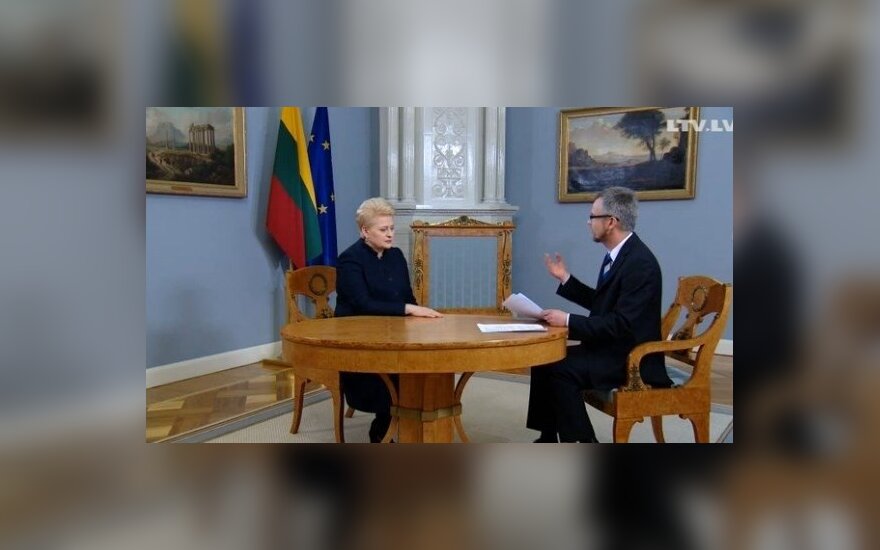 In the run-up to the Eastern Partnership Summit in Riga, journalist Gundars Reders of Latvia's LTV channel interviewed President Dalia Grybauskaitė in Vilnius. The 30-minute interview mostly focused on foreign policies and EU affairs. However, things went south once the Lithuanian president was asked a few questions that, apparently, had not been pre-arranged.

Reders asked President Grybauskaitė to comment on LGBT rights in Lithuania, reminding that Estonia had recently legalized same-sex partnership. "There is no large discussion in Lithuania until now and I think this topic is not on the agenda," Grybauskaitė responded.

In fact, a bill has recently been submitted in the Lithuanian parliament, Seimas, that, if passed, would introduce partnership for both same-sex and opposite-sex couples.

When Reders tried to follow up on the question, he was interrupted by President Grybauskaitė, who said she would not discuss the questions that had not been agreed upon in advance. She also asked to cut the footage of the exchange from the interview.

The same response followed after Reders gave a question about a tragic incident in Riga in 2013, when the roof of a Lithuanian-owned grocery store collapsed, killing 52 people.

"It was not agreed question, I am sorry, I am not prepared to answer," Grybauskaitė insisted, adding that the interview was finished, unless the Latvian reporter was ready to ask questions that had been agreed upon.

Seemingly in an attempt to rectify the situation and lighten up the tone of the interview, Reders then asked President Grybauskaitė who she thought were the five best Lithuanian basketball players of all time.

This, however, did not go well with the Lithuanian president either: "I cannot finish with such questions the interview. If you don't want to ask the questions agreed, we are finished. That's it."

The full interview (in English) is available here.