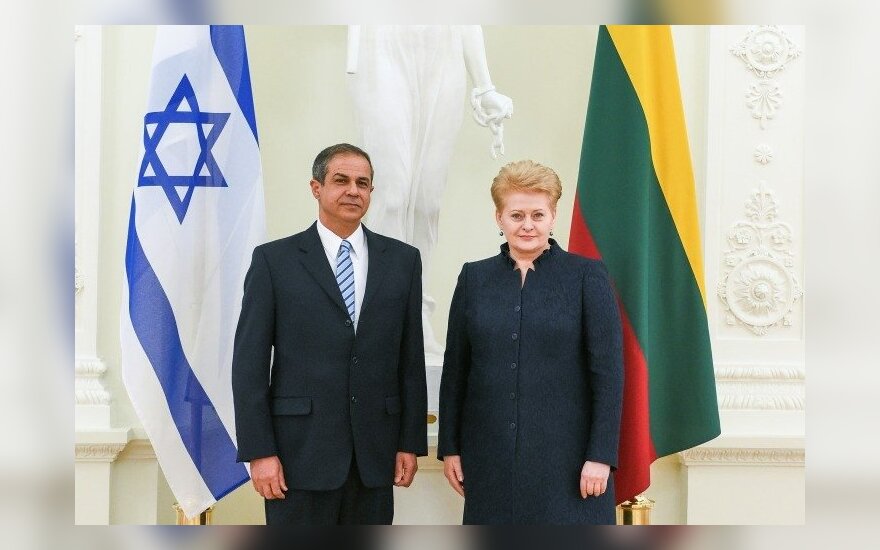 Welcoming the newly appointed ambassador, the president underlined that the opening of the Israeli Embassy in Lithuania was a historic event which would contribute to strengthening cordial cooperation between the two countries. According to Grybauskaitė, Lithuania and Israel should further maintain intensive ties and use the huge potential that exists for expanding bilateral partnership.

The president and the new ambassador discussed bilateral economic and cultural cooperation, highlighting the importance of continued partnership in the spheres of cyber security, new technologies, research, and tourism.

Maimon holds degrees in Social Sciences and History. This is his first appointment as ambassador. Prior to this assignment, the diplomat served as the director of the East European Division of the Israel Ministry of Foreign Affairs. His previous designations include the position of minister-counsellor at the Embassy of Israel in Washington and various positions in embassies in the United Kingdom, Ethiopia, Turkey, and Canada.

On 4 February, Deputy Minister of Foreign Affairs of Lithuania Neris Germanas met with new Ambassador of Israel to Lithuania Amir Maimon. The deputy minister underlined that the opening of the Israeli Embassy in Vilnius constituted an important step towards further intensifying bilateral relations between Lithuania and Israel, the Ministry of Foreign Affairs said.

"The opening of the Embassy will further deepen bilateral political and economic cooperation, people-to-people contacts and will contribute to the preservation and promotion of Jewish culture in Lithuania," said Germanas.

During the meeting, the deputy minister and the ambassador discussed close bilateral relations between Lithuania and Israel, prospects for their development, cooperation within international organisations.

An embassy of Israel was opened in the Lithuanian capital on Monday, its representatives said.