BNS
aA
After the far-left Syriza party won Greek parliamentary elections, Lithuanian parliamentarians say they do not expect major changes in Europe, as politicians tend to mollify their stance after coming to power. 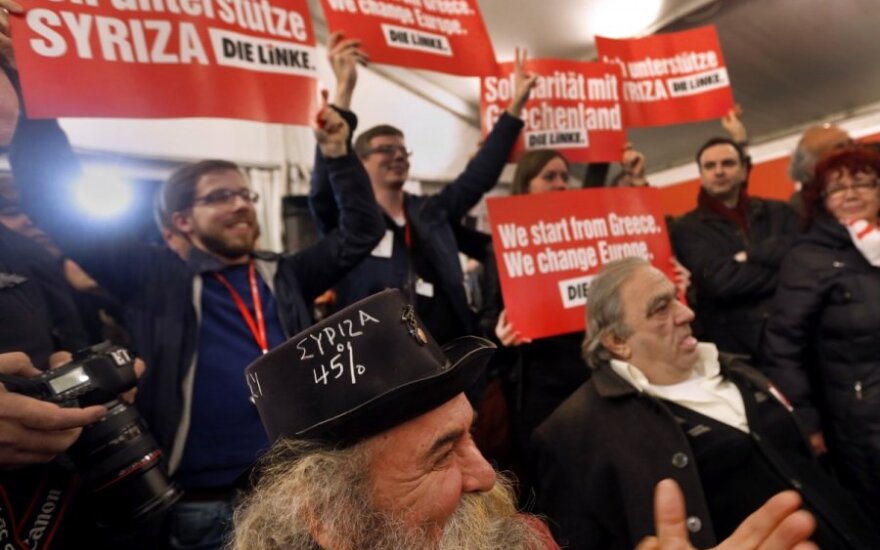 Lithuanian MPs told BNS that major changes in the Greek stance on Russia are also unlikely, as this is not a priority matter for Greece. Furthermore, Greece was not strict towards Russia until now. Nevertheless, all parliamentarians agree that the victory of the Euro-sceptic party is "not an advantage" for the European Union (EU).

"The elections in Greece are, unfortunately, a victory of Euro-sceptics. On the one hand, it will have negative effects on the market and on the euro to some extent. But Europe will not collapse and the euro area will not collapse, as well. Without a doubt, a new government will be formed, it will drop many of the election promises," chairman of the parliamentary European Affairs Committee, Gediminas Kirkilas of the ruling Social Democrats, told BNS.

Related articles
One in, one out? What Greece leaving euro zone would cost Lithuania  (1)
Lithuanian PM: Greece must stay with euro

Kirkilas said Greece would probably attempt to negotiate for some of its debts to be written off or possibly postponed "but not more".

He said the Greek stance on the sanctions for Russia was unlikely to change. "I do not think there have been any special changes. Even until now Greece had a peculiar attitude, also due to cultural links. As far as I observed, the statements made by the party that won the elections, I cannot say that it is any different from other Greek parties in this respect. There can be tensions between the EU and Greece, but they will be more about the economic situation in Greece," said the Social Democratic MP.

Benediktas Juodka, the leader of the Foreign Affairs Committee, said he thought the radical stance of the Syriza party will change after it comes to power.

"In any case, democracy is democracy, victory went to the party that was rather radical before the elections but the stance eased a bit during the elections," said Juodka, also a member of the ruling Social Democrats.

Rasa Juknevičienė of opposition conservatives told BNS she expected the new Greek government to be more balanced than the statements of the Syriza party, although some signs of concern exist.

"The statements made by the party until now contain a number of alarming signs, its statements about Ukraine were indeed highly pro-Russian and benefiting the Kremlin. All we can do is hope that after receipt of more information from relevant services – you normally get more balanced information in the government – the new government of the NATO member-state will be more balanced than the party's actions seemed until now," said the conservative MP.

In response to the election results in Greece, Lithuania's Foreign Minister Linas Linkevičius asked a rhetorical question about bills amid the Greek celebration of the end of the austerity regime.

"Syriza wins in Greece, celebration of the end for destruction and austerity. Interesting, who is going to pay all the bills?" he said in his Twitter feed.

One in, one out? What Greece leaving euro zone would cost Lithuania (1)

As anti- EU moods are brewing in Greece , the euro zone is worried about a new round of financial...

Lithuanian Prime Minister Algirdas Butkevičius thinks that Greece must stay in the eurozone and...