BNS
The mass protest action held in Vilnius on Thursday over salaries of health professionals and other reforms in the health care sector did not turn into a political event, says Lithuania's Prime Minister Saulius Skvernelis. 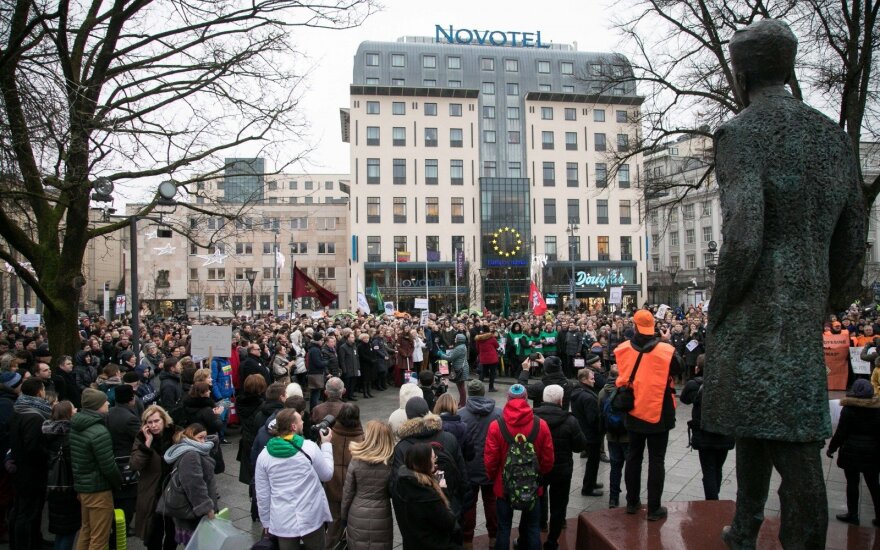 "I am happy that the event, the civil event did not evolve into a political campaign, with speeches delivered by those who should indeed be speaking, those who face the problems. I am glad that the young people who organized the event passed the examination in this sense," Skvernelis said after meeting with the organizers at the government on Thursday.

On the eve of the protest rally, he said the event would be a political campaign for "certain political forces" to show off, however, on Thursday stated that the attempt of the political parties to align to the doctor event had failed, as the speeches were made by the people who have the right to raise the issues.

Darius Jauniškis, chairman of the Lithuanian Movement of Doctors, told journalists after the meeting with the prime minister that the doctors heard promises about changes that were in the pipeline.

"What we need from the government is hope that reforms would begin, changes would kick off after years of idleness. So today we were given the hope from the prime minister, we heard promises," said Jauniškis.

"If we achieve the resolutions that we reached at the table today, if we achieve them by way of agreement, there will definitely be no need for strikes or anything like that," he said.

The Thursday's rally and the protest action in Vilnius involved over 1,000 people, mainly young doctors.

Resident doctors' salaries in Lithuania will be raised by 10 percent starting next January.

Lithuania's ruling coalition agreed to recognize that the conservatives ' bid to raise wages for...

A. Kubilius about cabinet reforms: theoretically a horse, practically – no vital signs