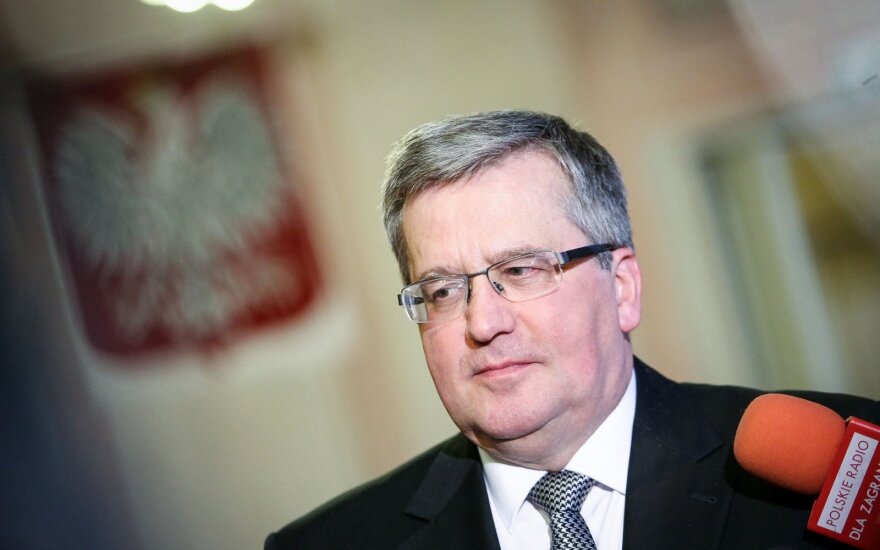 "Mr President, I am very pleased today to welcome you at the Government Office. Please accept my sincere greetings over the award of honorary citizenship of Rokiškis region, and thank you for the valuable exhibits donated to Rokiškis museum," said the prime minister.

On Tuesday, the former president of Poland was presented with insignia of Rokiškis honorary citizen. His Excellency had donated important documents relating to the land of his grandparents. The family of Komorowski Rokiškis lived in the village of Kovališkis about 300 years, their estate was turned into a recreation centre after World War Two, demolished in 1982 and replaced by a school.

During the meeting, the prime minister noted that the Polish-Lithuanian dialogue and rapprochement between people is a very important priority of Lithuania, therefore the Government stands ready to address any outstanding issues by way of dialogue. "Our countries are strategic partners in the region, the European Union (EU) and NATO. Our economic relations have always been very close, just like our positions on key issues on the international agenda. Together, we will continue strengthening our strategic partnership and cooperation," noted the head of government.

Cooperation in energy and transport has been pointed out as most promising.

"The bilateral Lithuanian-Polish cooperation in the energy sector is very important because it may implicate the entire Baltic region's energy security situation. We are happy to have the Lithuanian-Polish power bridge LitPol Link project drawing to a close, where at the end of the year LitPol Link will become the first point to connect Lithuania and the western European electricity infrastructure," said the prime minister.

The overall agreement was also reached over gas connection GIPL between Lithuania and Poland, with funding agreement to be signed on 15 October in Brussels. The prime minister and the president have agreed that this project is very important in the general context of EU energy policy, as contributing to one of the key EU energy policy objectives, i.e., the completion of the single energy market.

The issue of the Rail Baltica has also been discussed, noting the first railway section from the Polish-Lithuanian border to Kaunas to be opened on 16 October. The Head of Government has pointed out extremely important role of Poland for further integration of Lithuania and other Baltic countries into the EU transport networks and logistical chains.

On 13 October in Rokiškis (Lithuania), Minister of Foreign Affairs of Lithuania Linas Linkevičius...