BNS
aA
The Seimas of Lithuania started its spring session on Tuesday. Congratulating lawmakers on the occasion, President Dalia Grybauskaitė welcomed decisions made during the autumn session, including those on defence spending and euro introduction. 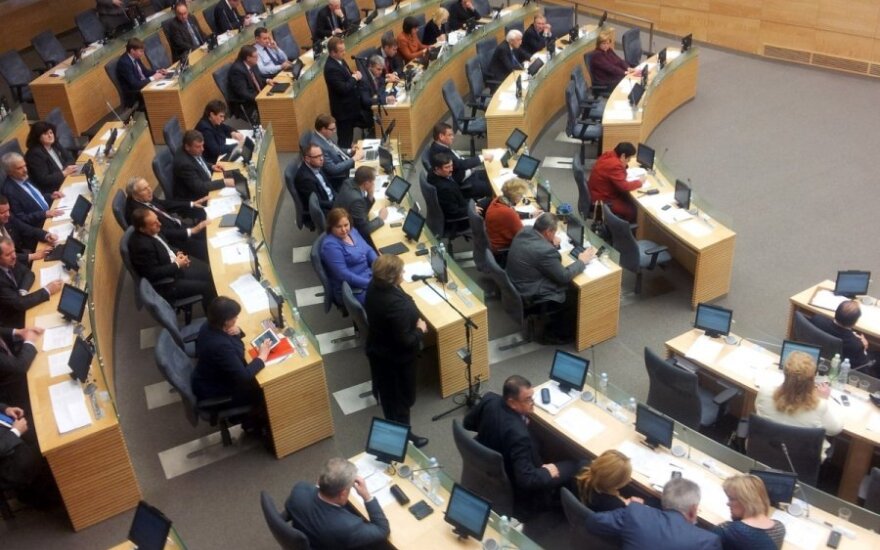 "I am glad that you finished the autumn session with a responsible attitude to the country's defence affairs and paved the way for euro introduction. I hope that issues related to building the state's security will become the priority of this session's agenda. Through join effort, we must make service in the Lithuanian army a symbol of honour, patriotism and citizenship, and military service itself should become more attractive and motivating," the president said in her letter of congratulation read out by Speaker of the Seimas Loreta Graužinienė during the first parliamentary sitting.

The starting session symbolically coincides with the 25th anniversary of the restoration of Lithuania's independence, the president said. "Led by the Reform Movement of Sąjūdis' fateful changes, Lithuania has attained a quarter of a century, marked by freedom and independence. By honestly performing our duties every day, we must strengthen the state and its freedom. It's especially important today as the Ukrainian nation is defending its freedom just 1,000 kilometers away," Grybauskaitė said in her letter.

"Not only good defence provides the feeling of security. It is important for people to feel the results of economic well-being. Strengthening social security, reducing exclusion and focusing on every person of the country must remain among key priorities," the president said.

On the eve of the Seimas' spring session, Speaker Graužinienė said parliament's agenda would focus on national security, national defence as well as the reduction of social exclusion and education.

Prime Minister Algirdas Butkevičius told journalists on Monday that priority amendments would be related to the introduction of a new social model, the regulation of employer-employee relations regarding dismissal and the reduction of shadow economy.

The Seimas is set to deliberate around 700 bills during the spring session that will include 50 plenary sitting.

The Seimas of Lithuania holds two annual sessions in each spring and autumn. The spring session starts on March 10 and ends on June 30. The autumn session begins on 10 September and end on 23 December.