BNS
Lithuania backs the US initiative to strengthen NATO capabilities in the Baltic States, Lithuanian Prime Minister Algirdas Butkevičius said after a meeting with US congressmen on Friday. 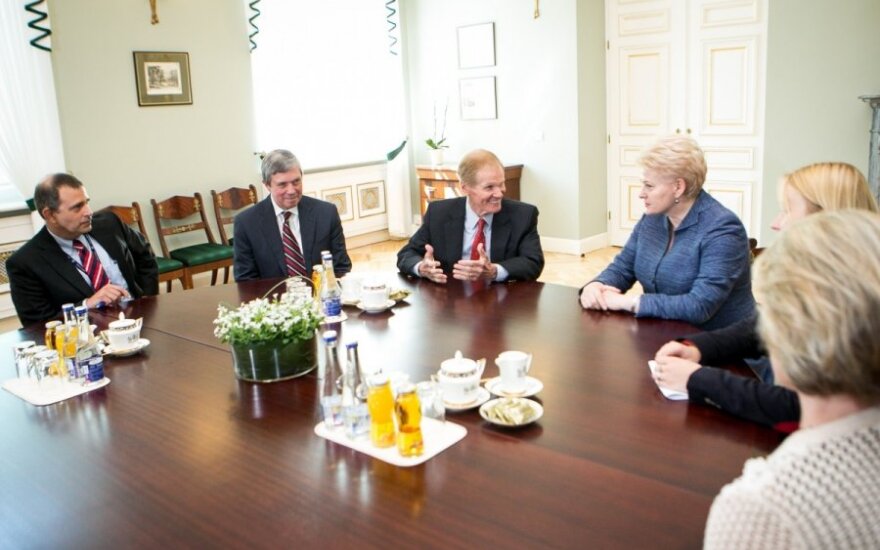 According to the prime minister, Lithuania appreciates the trans-Atlantic partnership "which is very important for our country in the wake of a huge crisis in the Eastern neighbourhood."

"Lithuania supports the US administration's initiative to strengthen NATO's allied security in Europe and the Baltic region," the prime minister was quoted as saying in a statement.

On Friday, Butkevičius introduced the US politicians to Lithuania's plans to gradually increase defence spending and investments into military infrastructure, the Lithuanian government's press service said.

The meeting also touched upon regional security issues, the situation in Ukraine, Russian economic sanctions, and the forthcoming NATO summit in Wales. Energy security, the possibility for Lithuania to import shale gas from the US and the opening of the American market for Lithuanian agricultural produce were also discussed during the meeting.

Lithuanian President Dalia Grybauskaitė and the country's Minister of Foreign Affairs Linas Linkevičius, who met with the members of the US Congress in Vilnius on Friday, urged them to endorse the allocation of 1 billion US dollars for strengthening security of Eastern European countries.

"In the face of Russian aggression threats, the role of the US in our region is especially important not only in terms of strengthening defence capabilities, but also for increasing the region's energy security and opportunities to resist economic pressure," President Grybauskaitė said after meeting with Democrat Senator Bill Nelson.

Meanwhile, after meeting with the three congressmen, Foreign Minister Linkevičius "expressed hope the US Congress will make a positive decision in the fall" on the 1-billion-dollar plan.

"A resolute, united and coordinated political response and practical steps of the whole transatlantic community are needed to prevent aggression and further expansion of the crisis," the minister was quoted as saying in a statement.

The Lithuanian government representatives also called on the United States to liberalize LNG exports and open the American market for Lithuanian meat products.

Lithuanian Minister of National Defence Juozas Olekas on a visit in Afghanistan discussed...

NATO should do more to ensure security in Eastern Europe, says Ambassador of the United Kingdom to...