BNS
aA
Two former Lithuanian leaders – ex-president Valdas Adamkus and the country's first post-independence leader Vytautas Landsbergis – have urged the government "to do everything in its power to immediately halt the construction of the Astravyets nuclear power plant" in Belarus some 50 km east of Vilnius. 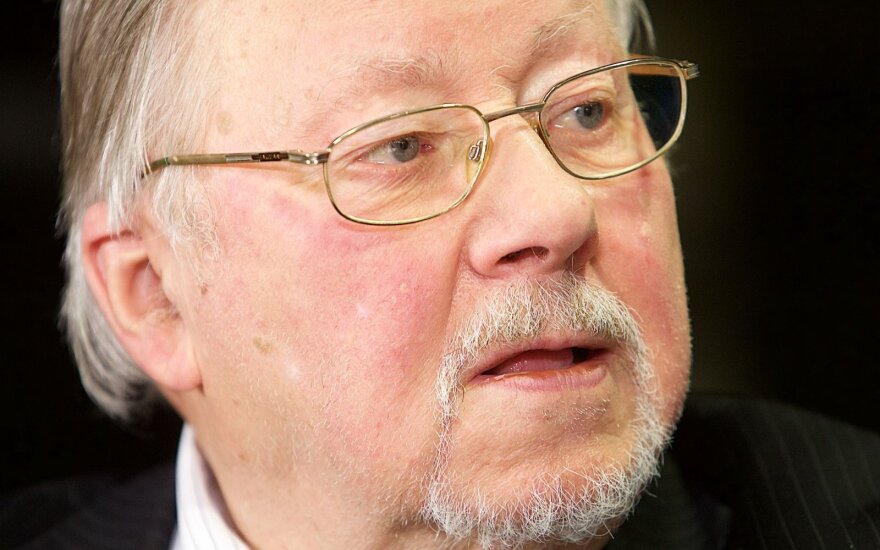 Their address to the government was also signed by the leader of the opposition Homeland Union – Lithuanian Christian Democrats (conservatives) Gabrielius Landsbergis, the opposition Liberal Movement's leader Eligijus Masiulis and the chairman of the Lithuanian Peasant and Green union, Ramunas Karbauskis.

"Under the [current] schedule, the Belarusian power plant should be connected to the electricity network in three years. This unsafe power plant will be connected to the existing powerful power transmission lines leading to Visaginas and the ones to be built to Kruonis, therefore, the electricity generated there will flood our country in an uncontrollable manner, triggering a broad range of economic and political consequences," said the letter.

According to the letter, this will not only render Lithuania politically dependent on unsafe electricity production but will also cause the country to finance a project that is potentially disastrous.

"By refusing the entry of Astravyets electricity to Lithuania, by not buying it and not allowing the use of the reserve capacities of the Lithuanian power system, we can build formidable obstacles for the project developers, burdening the implementation and payback. With all this in mind, we are turning to the government of Lithuania and all international organizations with a demand to do everything in their power to immediately halt the construction of the Astravyets nuclear power plant," they said.

The letter also called on Lithuania's government to ensure that the electricity generated in the Belarusian facility in Astravyets does not enter or transit Lithuania under any circumstances and is not sold on its market.

“The government has been working on this issue for quite a time and many things have already been done. I regret that this matter gets caught up in the elections agenda. Instead of uniting and looking for ways to tackle this issue, which all political parties agree on, it is now put forward as something that is not being addressed,” Rokas Masiulis told BNS.

“It is all the more regrettable that there is a certain element of sowing discord, when even such highly respected people as [ex] president Valdas Adamkus and Vytautas Landsbergis get involved in the campaign,” he said.

“Works are being done and I’d say that statements that nothing is done, which are made with 10 months left until the elections, are pure politicking,” the minister said.

Masiulis said that the construction of the nuclear power plant in Astravyets had been launched at a much earlier date so the former center-right government should also share responsibility.

In December, Masiulis sent a letter to the economy and energy ministers of Latvia, Estonia, Poland and Finland, calling on them not to buy electricity from the nuclear power plants being built in Belarus and Kaliningrad. The Lithuanian authorities are also seeking to elevate the issue of the nuclear power plant in Astravyets to EU level.