BNS
aA
The cabinet of Prime Minister Algirdas Butkevičius is approaching the line where half of its original members will have been replaced, necessitating a confirmation vote in parliament. 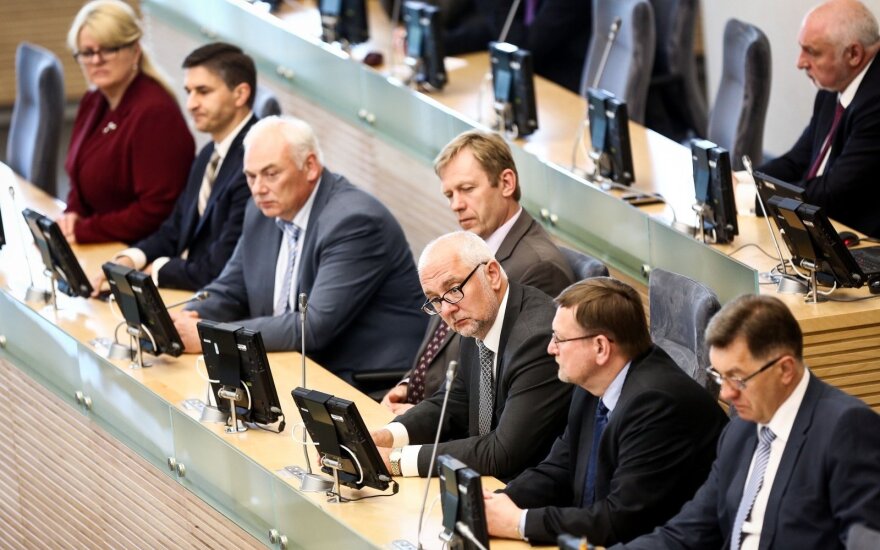 Four out of 14 Cabinet ministers have been replaced since the government was formally granted powers by the Seimas in 2014, following a presidential election.

Three more ministers are about to or could be forced to leave their posts.

Social Democrat Finance Minister Rimantas Šadžius is leaving for Luxembourg in May to work at the European Court of Auditors. Environment Minister Kęstutis Trečiokas is facing opposition-initiated no-confidence vote, while Interior Minister Saulius Skvernelis could lose the post after changing political affiliations.

If Interior Minister Skvernelis decides to leave and the Order and Justice's Trečiokas is removed by the opposition, this will leave only half of the original cabinet, endorsed by parliament in 2014, in posts.

Under the Law on the Government, when more than half of the 14 ministers are replaced in the cabinet, the Seimas must have a vote in order to empower the government anew.

Rolandas Paksas, leader of the Order and Justice party which delegated Skvernelis, has recently called on the interior minister to resign after the latter announced his plans to run for parliament with another party, the Lithuanian Peasant and Greens Union.

The prime minister says he will make a decision regarding Skvernelis after meeting with Paksas.

Environment Minister Kęstutis Trečiokas , who has been at the centre of a controversy over...

Replacing the government months before general elections would be "irresponsible", Lithuanian...