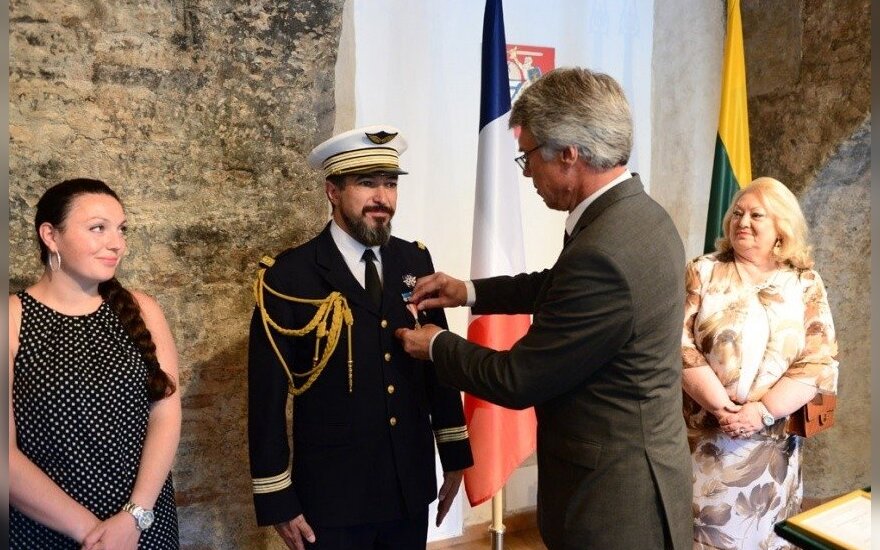 Defence Minister Valys also underlined that the recent period featured an intensified defence cooperation between Lithuania and France: high-level meetings, an update of governmental security and defence cooperation agreement, the active role of France in the NATO Baltic Air Policing Mission, and the NATO Energy Security Centre of Excellence in Vilnius, Lithuania's involvement in the French-led Operation Sangaris aimed at stabilising the security situation in the Central African Republic, etc.

Ambassador of France in Lithuania Maryse Berniau also highlighted at the ceremony that the defence cooperation between the two countries had progressed into a new level. "This has been the golden age of the cooperation of our armed forces," the ambassador said when addressing the intensifying cooperation across a variety of areas which will be continued in the spirit of mutual trust and understanding by the new defence attaché.

France was the first NATO member state to launch defence cooperation with Lithuania and the first foreign nation to provide material support for the Lithuanian Armed Forces at the outset of its re-establishment.

The 1994 agreement between the Lithuanian and French Governments on security and defence cooperation was updated in July 2013.

The four rotations already provided to protect the Baltic airspace also places France among the most active contributors to the NATO Air Policing Mission in the Baltic States. Moreover, four French fighter-jets have been deployed to Poland this April to augment the mission.

France was also supporting Lithuania during Lithuania's Presidency of the Council of European Union last year.

Another important area of Lithuanian-French cooperation is military training - Lithuanian military are invited to improve their professional abilities in different courses and traineeships in France on an annual basis. The Military Academy of Lithuania and the Special Military School of Saint-Cyr (Ecole Speciale Militaire de Saint-Cyr, ESM) have been cooperating in training future officers since 2011.

Lithuanian and French soldiers are training side by side in multiple exercises. Over 40 French participants attended Steadfast Cobalt, NATO communications exercise at the Lithuanian Armed Forces School in Kaunas in May, while the French contingent made up more than one fifth of the total of 5 thousand participants of the largest NATO exercise in the Baltic and Poland in 2013, Steadfast Jazz 2013.

Lithuania is providing support to France's efforts of stabilising the situation in the Central African Republic (CAR): by request of France Spartan C27 transport aircraft with crew of the Lithuanian Air Force was deployed for one month to French-led Operation Sangaris in the CAR this spring to carry out transportation of equipment, materiel and personnel for the needs of the operation.

New French defence attaché to be accredited in Vilnius

Lithuanian President Dalia Grybauskaitė has appointed her senior adviser Valdemaras Sarapinas as the...