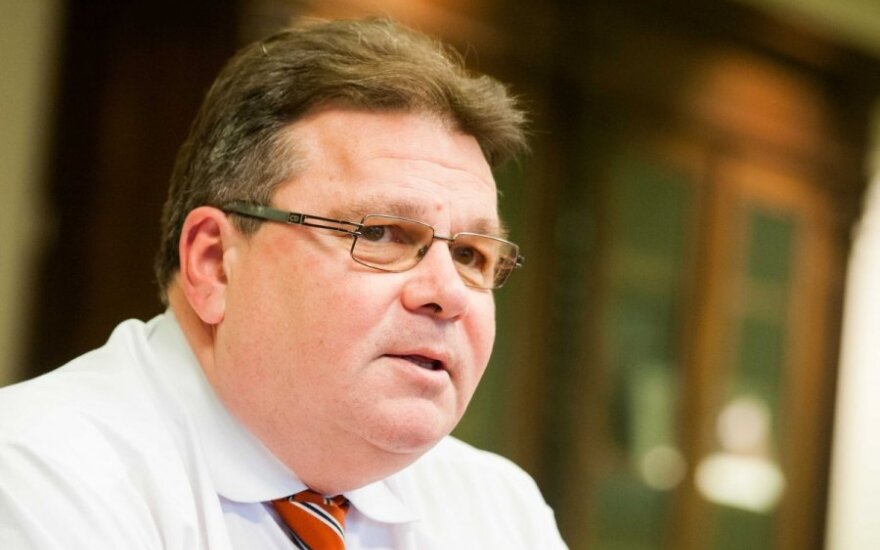 "A small country can do a lot if it concentrates its efforts," said the minister when he spoke about Lithuania's efforts to mobilise partners to provide political, diplomatic and financial support to Ukraine, and thus contribute to ensuring peace and stability in Europe.

"We were very active in developing our relations with the EU's Eastern partners on bilateral as well as on the EU level. All six Eastern Partnership countries welcomed these activities," said Linkevičius.

The minister also mentioned that a lot of attention was devoted for the UN related topics and international challenges such as ensuring peace and strengthening international security. All year long Lithuania chaired the UN Security Council Counter-Terrorism Committee and the Committee of Sanctions for Central African Republic and Yemen, and in February 2014 Lithuania held the presidency of the Security Council.

He appreciated efforts made by the Economic Diplomacy Council and the constructive dialogue it conducted with business and associated structures in search for solutions to challenges currently faced by Lithuanian businesses.

A lot has been done to improve consular services as well, including expansion of the network of external service providers, establishment of new visa issuing centres, enlargement of the network of diplomatic representations, i.e. the decisions to establish an embassy in South Africa and the Consulate General in Los Angeles were made, and a network of honorary consuls was also expanded.

When giving an overview of major tasks for the next year the minister drew attention to the issue of Ukraine, mentioned strengthening of relations with Eastern partners and the Eastern Partnership Summit to be held in Riga in 2015. In the UN Security Council Lithuania will continue to focus on reinforcing the rule of law and human rights, conflict prevention, and addressing safety of journalists and threats caused by proliferation of small arms and light weapons. In May 2015, Lithuania will take over the presidency of the UN Security Council.

"We hope to start negotiating our membership in the Organisation for Economic Cooperation and Development. We believe that membership of the OECD will have a positive effect on our economy and image of the country," Linkevičius said.

The minister highlighted that next year a lot of attention will be devoted for economic diplomacy, search for new markets and strengthening of information security, especially by mobilising leaders with similar views across the EU.