Lithuanian envoy at UN: Ukrainians are entitled to defending their land

BNS
aA
Lithuania's representative at the United Nations (UN) Security Council Raimonda Murmokaitė has strongly criticized Russia for supporting separatists in eastern Ukraine, emphasizing the right for Ukrainians to defend their land amid the continued siege of the city of Debaltseve. 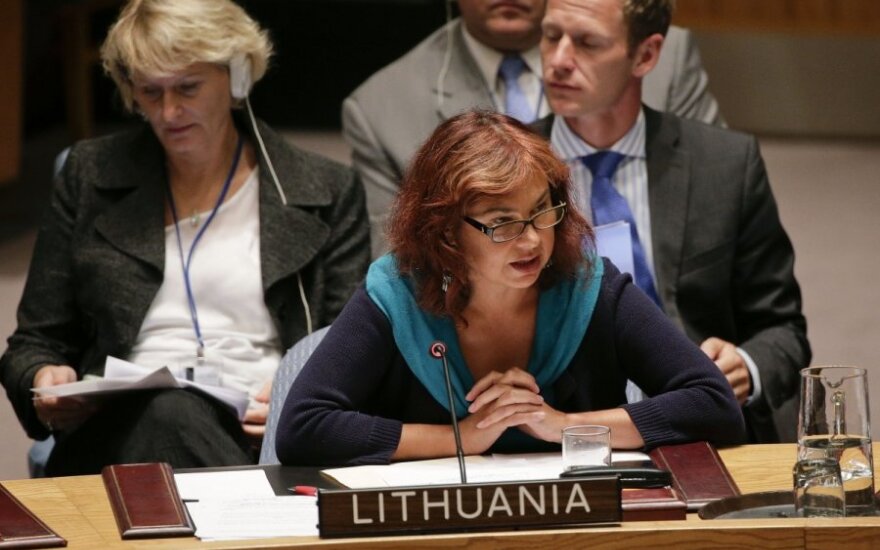 Speaking at a meeting in New York, which ended minutes before midnight Vilnius time, the ambassador exchanged a few statements with a Russian diplomat who maintained that Moscow supported peaceful settlement of the conflict.

"The Ukrainian city of Debaltseve is under siege even as we speak. Ukraine is holding on, trying to defend a piece of its own land, away from the ceasefire lines established in the Minsk agreements," she said.

Related articles
Lithuanian foreign minister: Truce in Ukraine does not hold
Landsbergis on Independence Day: Ukraine is defending us all

"I think any country sitting at this table would do exactly the same. Any country sitting here would defend their own territory to their last, and Kiev is no exception," Murmokaitė said in her address to the remaining 14 members of the UN Security Council.

The Lithuanian diplomat warned that "heavily armed criminals are continuing their onslaught against Debaltseve and threaten to continue their deadly march, up to Kharkiv and further".

Just like the remaining 14 Security Council members, Murmokaitė voted in support of Russia-proposed resolution, which expressed support to last week's Minsk agreements, but underlined in her speech that the agreements had already been breached by Moscow-supported separatists.

The ambassador said that the separatists had Russian tanks and artillery munitions, adding that eastern Ukraine would have enjoyed peace a long time ago without direct support from Russia.

The Lithuanian diplomat urged Russia to withdraw its troops and pull back weaponry from the Ukrainian territory, allow restoring border control and release of unlawful detainees, including Ukrainian pilot Nadia Savchenko.

In comment of the calls for Ukraine to launch a Constitutional reform that would provide more autonomy to eastern regions, Murmokaitė said it was a difficult task to perform with a gun pointed at your head.

"We will continue telling Ukrainians that they have to continue with the reforms, that they have to combat corruption, to do a lot of things so that restore that trust which have been lost over the decades prior to this government. But it's very difficult to take care of Constitution when guns are being pointed at your head," said the Lithuanian ambassador to the UN.

Lithuanian foreign minister: Truce in Ukraine does not hold

Pro-Russian separatists are not keeping up with the truce terms, Lithuanian Minister of Foreign...

Landsbergis on Independence Day: Ukraine is defending us all

The world is faced with a new challenge, while Ukraine is defending itself in a war waged by the...

Russia ’s persistent support to separatists has led to the Mariupol tragedy when around 30...