BNS
aA
Lithuania's Education and Science Minister Dainius Pavalkis met with Prime Minister Algirdas Butkevičius and President Dalia Grybauskaitė on Wednesday to discuss his party's calls for him to resign. 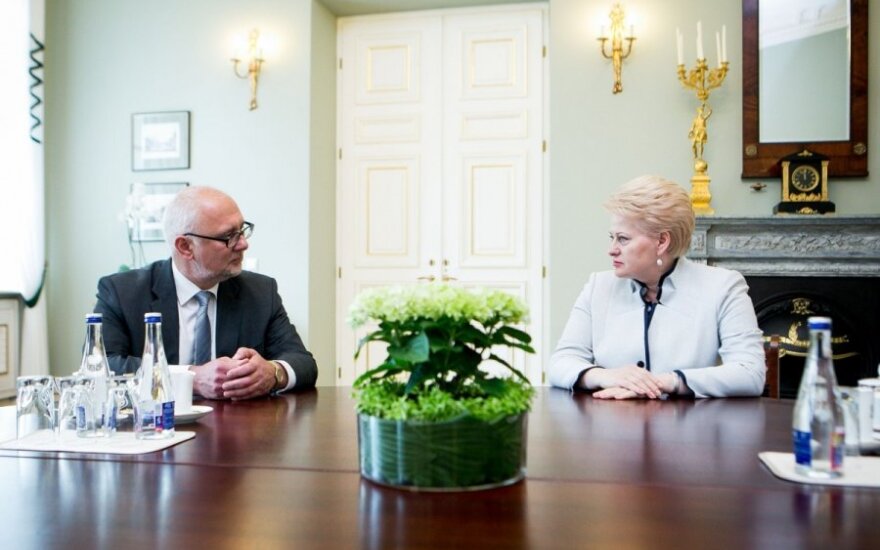 Pavalkis confirmed to BNS that the meetings did take place, pledging to tell the media about the situation after the government's meeting later in the day.

The president's spokeswoman Daiva Ulbinaitė told BNS "a working meeting did take place in the morning, with no comments made on its content".

Last weekend, the Labour Party surprised everyone by announcing that it wants to recall its own minister from the cabinet, saying he was not implementing the party's programme properly.

President Grybauskaitė later commented that Pavalkis was doing a fine job and that he probably got into his party's disfavour for prioritizing his duties as a minister over the Labour Party's interests.

Before the meeting with Pavalkis, Butkevičius told the Polish-language Znad Wilii news radio on Wednesday morning that he expected the Labour Party's leaders to give him the reasons for Pavalkis resignation from education minister.

"I have heard no reasons so far but I will meet with three members of the Labour Party's leadership today: Vytautas Gapšys, Valentinas Bukauskas and Kęstutis Daukšys, they are coming to see me and I truly hope they will give me the reasons. If we were to talk about the performance of ministers, the government demands that every minister should implement the government's program," said the prime minister.

He said the Labour Party's call for Pavalkis to step down could have to do with preparations for the 2016 parliamentary elections.

"I believe the emotions are still high after the (recent) elections to municipal councils and clearly some parties are getting ready for the upcoming elections to the Seimas," said Butkevičius.

On Tuesday, the Labour Party's founder MEP Viktor Uspaskich stated that refusal of Pavalkis to step down or the PM's support would burden the coalition's work.

Lithuanian President Dalia Grybauskaitė is critical of the Labour Party 's decision to recall its...

The Lithuanian Labor Party decided on Sunday that its education and science minister, Dainius...