BNS
aA
Diplomat Vygaudas Ušackas and MP Ingrida Šimonytė, who are vying with each other for the Homeland Union–Lithuanian Christian Democrats (TS-LKD) nomination to run in next year's presidential election, differ in their attitude toward family, with the former tying it to marriage and the latter calling for not ignoring reality. 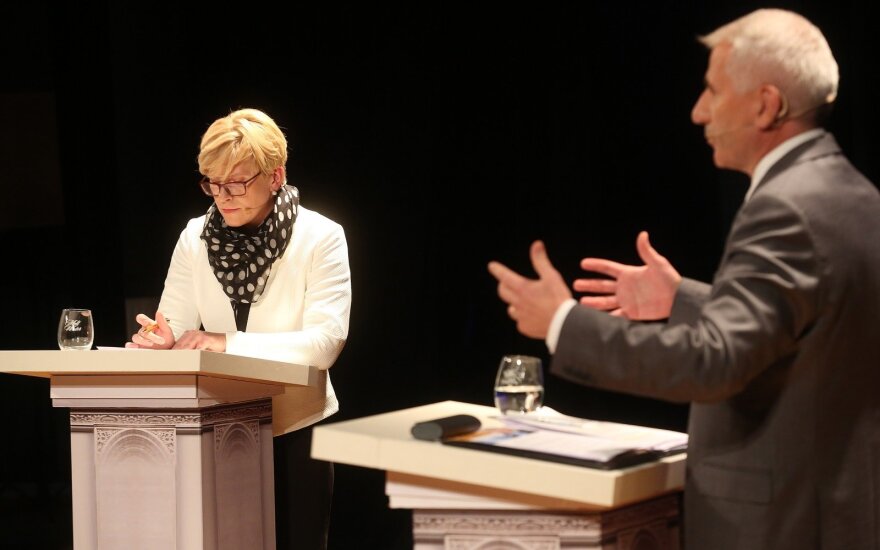 "It is my firm conviction that marriage between a man and a woman is the core of our society, and we have to preserve it and to ensure that the person-family-society-state chain is strong," Ušackas said in the conservative party's second presidential primary debate on Monday.

The diplomat said he would approve of same-sex partnership, but underlined that he did not consider a homosexual couple as a family.

"I'd approve of partnership, but partnership is not a family. My position is that we must protect family as a natural organic marriage between a husband and a wife, as one of the Christian values," he said. "I'd never equate a same-sex partnership to a family or marriage."

When asked if she would back same-sex partnership, Šimonytė said she had voted for a bill on recognizing in law such partnerships, but it had been rejected.

"There have been two bills in the Seimas. I voted in favor of one of them. I did not vote in favor of the one that tried to define partnership as a kind of private limited company," the lawmaker, an economist by profession, said.

"I don't really think that relations between people should be defined as a commercial arrangement. If we speak about partnership as it is understood in the West, then I voted in favor of such a bill and I don't see why I should change my opinion," she said.

Šimonytė said "we can't ignore the reality and try to fit everyone into a certain model", noting that around 40 people in the country are born out of marriage.

"I don't have a spouse, but I do have my mother, whom I'm very devoted to, whom I'm caring for and whom I'd give everything I have. I don't consider myself as having no family," she said.

However, when asked if she would amend the article of the Constitution reading that marriage is concluded "upon the free mutual consent of man and woman", Šimonytė said this was a difficult question.

"I think we should first solve what has been unsolved for years. The Civil Code has been in force since 2001; the institute of partnership is established there," she said.

Partnership as a form of cohabitation without registering a marriage is envisaged in the Civil Code, but a special law needed for it to actually work has not yet been passed.

Šimonytė will run against Ušackas in the TS-LKD primaries to be held on November 3-4 to choose the conservative party's candidate in next May's president election.

Initial opinion polls showed that both politicians had around 10 percent support among voters, but Šimonytė's approval jumped to 17.5 percent after she announced her decision to stand in the primaries.

Faina Kukliansky , chairwoman of the Jewish Community of Lithuania (JCL), on Friday voiced her...

In response to criticism over pension cuts, Šimonytė tells Ušackas he was in same Cabinet

In response to criticism from Vygaudas Ušackas over pension cuts, Ingrida Šimonytė reminded her...