Lithuanian and US soldiers brushed up skydiving skills in Pabradė

the Lithuania Tribune
aA
Soldiers of the 173rd Airborne Brigade's 1st Squadron, 91st Cavalry Regiment and the Lithuanian Land Force brushed up their skills Tuesday at a parachute training event at the General Silvestras Žukauskas Training Range in Pabradė, the Ministry of National Defence informs. 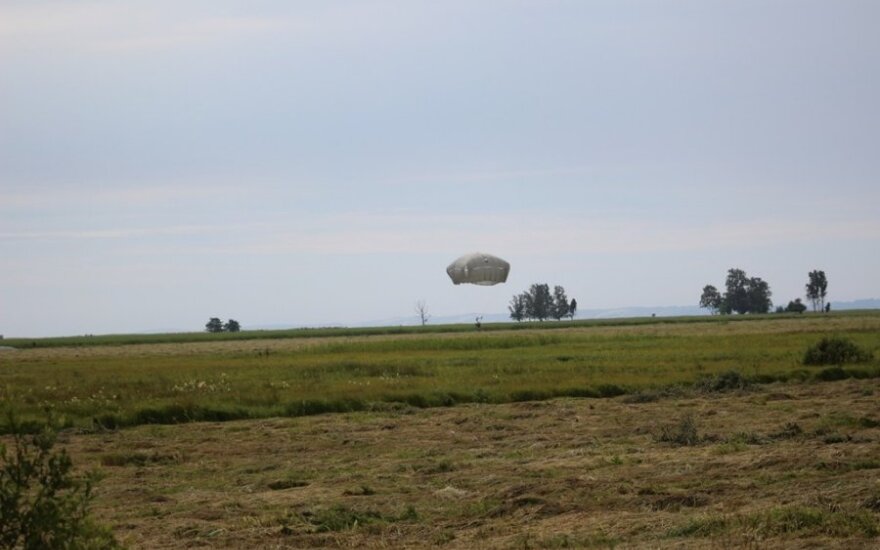 The event trained automatic opening parachute jumps. According to the exercise schedule, all the participants took off on a US airplane from Šiauliai Airport and skydived over the territory of the General Silvestras Žukauskas Training Range. The US soldiers attended the exercise together with representatives from Grand Duke Birutė Uhlan and the Lithuanian Grand Duke Butigeidis Dragoon Battalions and the Mechanised Infantry Brigade Iron Wolf from the Lithuanian Land Force, and reconnaissance squads of the National Defence Volunteer Force.

After landing the soldiers of the 173rd Airborne Brigade's 1st Squadron, 91st Cavalry Regiment joined the personnel of the Birutė Battalion in a company-level field tactical exercise Uhlan Fire 2014 held during the last week of July at the General Silvestras Žukauskas Training Range. The bilateral exercise trained the participants offensive and defensive techniques.

Military personnel of the 173rd Airborne Brigade of US Army in Europe have been deployed in Lithuania since late April when the United States sent its troops to Lithuania to demonstrate commitment to NATO obligations and sustain interoperability with allied forces. US forces of similar qualification and size are also deployed in Poland, Latvia and Estonia.

The US soldiers have joined land force training throughout Lithuania from the first days of deployment. The US military have already taken part in Exercise Black Arrow, joint US-Baltic Exercise Saber Strike, and other exercises of various scales.

In the last week of July the US troops will be training with military of the Grand Duchess Birutė Uhlan Battalion at a tactical field exercise Defensive/Offensive.

Till the end of the year the US soldiers will be joining an international Exercise Saber Junction, and various other artillery/mortar fire drills of the Lithuanian Land Force.

Lithuania is providing any host nation support necessary, lodging, feeding, logistic support, etc., for the deployed forces. The US presence is planned to be sustained in Lithuania through at least the end of the year.

The US troops deployed in Lithuania are stationed at the Duke Vaidotas Mechanised Infantry Battalion in Rukla.

60 million litas (over EUR 17 million) will be spent on fighting vehicles, anti-tank weaponry and...

Lithuanian and US troops hold joint training in urban warfare

Dust in the training range, another day wearing out with the heat of July, a bulletproof jacket...

NATO officer: exercise in Lithuania will be larger, adapted to Russian action (2)

Exercises in Lithuania and NATO 's other Eastern member-states will be larger and adjusted to the...