Lithuanian analysts give views on US election

the Lithuania Tribune
aA
The US presidential race is followed with attention around the world. As Donald Trump keeps securing victories in Republican primaries, Lithuanian analysts and politicians discuss the implications for international politics and the Baltic states. 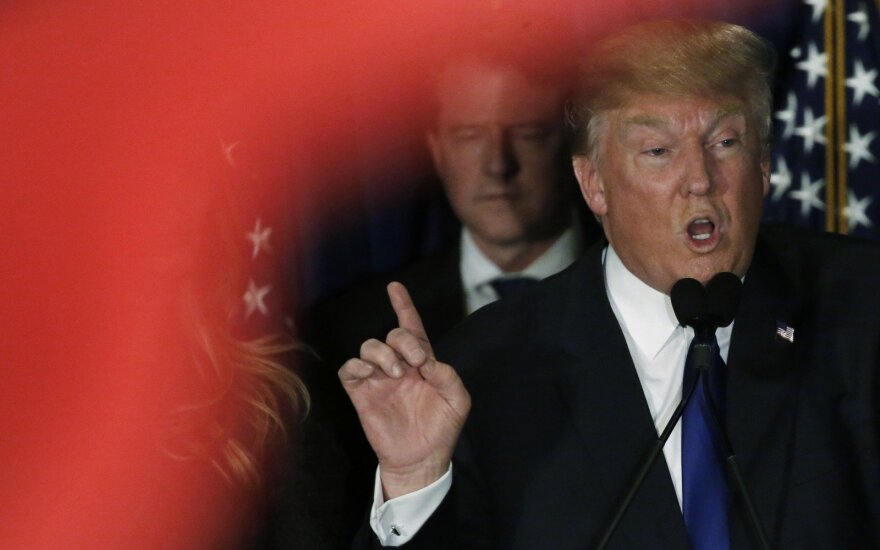 Mr. Katkus, will Donald Trump be the presidential candidate of the Republican Party?

Katkus: The current election campaigning shows that the Republican Party has been divided into three blocks instead of the traditional two – the Christian right, the moderate conservatives and the Trump block.

Related articles
Opinion: Why Baltics should hope Marco Rubio wins US presidential election  (2)
Trump, Clinton, Cruz, Sanders: Who would be the best US president for the Baltics?  (2)

For a period of time, Trump was considered as a political impossibility. However, he managed to secure votes from every block, together with new voters. Therefore, he built a third block around himself, distinguished by two main aspects: anger towards Washington and lower education level. Supposedly, Trump’s voters do not have university diplomas.

The question is, can the third block expand further? Usually he receives 25-30% at most, sometimes 40%, but he needs at least half of the votes. Other two candidates, Marco Rubio and Ted Cruz, can possibly collect similar amount of votes.

Will Republicans be choosing from three candidates?

Pavilionis: Currently, America is suffering from protest voting and the lack of leadership. Also, we have not encountered such range of global tensions since the Second World War. Therefore the presidential candidate Rubio has the highest possibility to take “the rational vote”. However, Lithuania needs to think if protests will continue, although the US election coincides with Lithuanian parliamentary elections.

Do you see Trump as the Republican nominee in America’s next presidential election?

Pavilionis: Personally, I doubt he will be selected.

Katkus: Due to many factors, I do not have a clear opinion. However, the main question remains – will Trump secure 50%+1 votes in at least one state or not? In previous elections, Mitt Romney was getting more than 50% of the vote at the same time in the process and, eventually, became the Republican nominee. If the agreement will not be reached in order to save the party’s spirit, Republicans might announce a new candidate – the Speaker of the US House of Representatives or Mitt Romney.

What is the situation in the Democratic primary race?

Pavilionis: The Democratic candidate Hillary Clinton is considered to be a central-left politician, different from Obama who has strayed to the left. If Republican party does not come up with a solution, moderate conservatives might be open to give their vote to her. Therefore, Trump’s campaign is actually helping his rival. Also, we need to keep in mind the possibility of Joe Biden’s candidacy.

Katkus: Last year, we assumed there would be a battle of Scott Walker, Jeb Bush and Hillary Clinton. One month ago, Rubio's chances of winning increased rapidly. Now we see that it is likely that Hillary Clinton will face Trump.

However, Clinton also needs to battle 73-year-old senator Bernie Sanders, who claims that Wall Street is bad, Washington is corrupt and accuses Clinton of taking money from Wall Street. However, Clinton has established her strength among black voters, which helped her reach victory in Nevada. But in the so-called “white states”, like Iowa, Clinton won by a very small margin and was crushed in New Hampshire.

Mr. Laurinavičius, which candidates have most chances of securing their parties' nominations?

Laurinavičius: There are no clarity who can be the candidate on either side. Mr. Pavilionis has already mentioned Biden, we should not forget Michael Bloomberg’s remarks about entering the competition as well. This American election campaign has been very complex, so it is hard to tell what is waiting around the corner.

Pavilionis has mentioned that Lithuania might need a plan B, if the next US president proves to be an isolationist. What do you think about this possibility?

Laurinavičius: We should put this major problem into a wider context. America tends to isolate itself. Despite talks about Russia and terrorism, the need for US to step back from the world affairs is increasing. Thus, we need to start thinking about developments in the world more seriously.

Katkus: Sanders has said that Vladimir Putin is not a rival or a problem for the USA, Trump is glad that Putin calls him a good guy and thinks they could get along. Even Ted Cruz, the traditional conservative, has used the slogan “America’s first” – an isolationist phrase by Charles Lindbergh, which has not been used since 1938. This has to be taken into account by Rubio as he is the most determined candidate to maintain America’s global presence. Therefore, we should already think about ways to increase Lithuania’s visibility and importance in the region.

Pavilionis: Before NATO's summit in Warsaw, the decisions are being prepared by professionals and are influenced by Putin and his friends. Although President Dalia Grybauskaitė is going to Nuclear Security Summit in Washington, unfortunately, there’s a lack of initiative from other political leaders. We should focus more on US-Lithuanian relations, which are left to the responsibility of several high-level diplomats. All parliament members should, instead of travelling to Africa, Asia and other “shopping trips”, take US-Lithuanian relations more seriously and hold meetings at least once a month. I tried to persuade MPs to come to the United States, to make friends and contacts in Washington, in case the day X comes and we would have whom to call.

Katkus: John McCain and the entire old generation of conservatives in both parties, including Hillary Clinton who agrees with McCain on many points, were raised during the Cold War and are old friends of Lithuania. They are being replaced by new generation politicians who are aware of issues of China, Mexico and ISIS, but less so of Russia and Cold War problems. This will have an impact on us too.

The election for US President is well underway and the races are so close that only a few percentage...

Which U.S presidential candidate would be best for Lithuania? (16)

In an analysis of the U.S presidential race, public relations expert Mykolas Katkus and acting...

The head of the Crimean resort city of Yalta, Andrey Rostenko, has invited US presidential...