(1)
aA
In preparation for their visit to Lithuania, the Swedish royal couple, King Carl XVI Gustaf and Queen Silvia, dined at the Lithuanian ambassador's residence in Stockholm on 29 September. 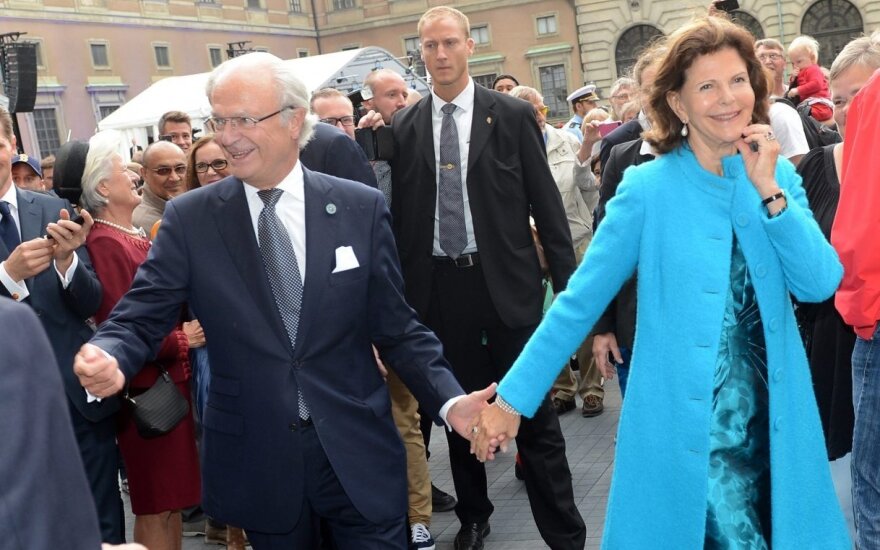 "It is a big honour and a great pleasure that Your Majesties are going to visit our country. You will witness the massive transformations in Lithuania that has occurred since your last visit," said Ambassador Eitvydas Bajarūnas, who hosted the dinner with his wife Rita.

"Since the restoration of Lithuania's independence 25 years ago, we have continuously felt a strong backing from Sweden. Our countries are united by common values and clear goals. We cherish our freedom but we also care much about everyone's right to be free. This year we pursue it at the UN Security Council, holding a non-permanent seat. We support Sweden’s goal to become a non-permanent member of UN Security Council, as we believe in ideals of freedom," Ambassador Bajarūnas said during the dinner.

Visiting ambassadorial residences prior to state visits is a long-standing tradition of the Swedish Royal palace.

During the dinner, the guests discussed the programme of the visit, Lithuanian and Swedish political, cultural, academic and economic cooperation.

"It is symbolic that the main theme of Your Majesties’ visit to Lithuania is 'The Baltic Sea unites us'," Ambassador Bajarūnas said. "The sea which used to separate is now uniting us by numerous political, energy, cultural, research, business, and people-to-people ties. We are bound by common values, traditions, culture. The Midsummer celebration – known as Joninės in Lithuania – is the best proof of this. It has become a much-awaited community event in Lithuania, just like in Sweden, highlighting the strong links between our nations.

"We also are rediscovering our historical bonds, with more and more Swedes learning that Queen of Sweden Catherine Jagiellon belonged to the ancient Polish-Lithuanian dynasty. It has an exceptional significance to us that Your Majesties are visiting the recently rebuilt Palace of Grand Dukes of Lithuania next week, a palace which once was inhabited by Kings of Vasa dynasty - descendants of Catherine Jagiellon."

"Your visit to Lithuania is to remember our past, to look to ongoing cooperation, but the most important – to contribute to the future. The NordBalt power bridge – scheduled for operation at the end of this year – will become yet another linkage connecting our countries and will allow Lithuania to have secure and competitive energy supplies. The state visit will present modern Sweden to Lithuanians, a country with high sustainability and advanced ecological standards, country striving to be the most gender-equal and egalitarian in the world with a cohesive and solidarity-based society."

Carl XVI Gustaf of Sweden and Queen Silvia are coming to Lithuania on 7-9 October.

At the invitation of Lithuanian President Dalia Grybauskaitė , Carl XVI Gustaf of Sweden and his...