Lithuania will not back Italian candidate for EU foreign policy chief 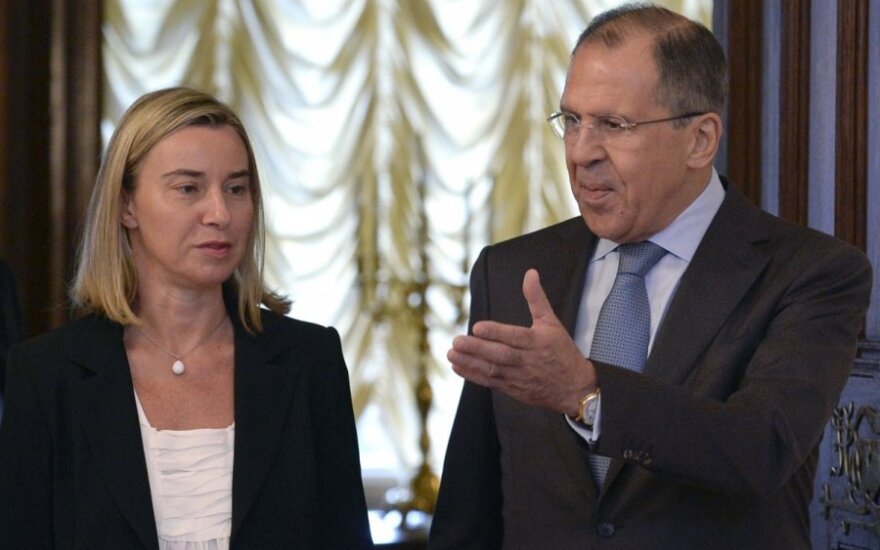 "As far as I know, the candidature of the Italian foreign minister will not be supported," he told the national radio LRT.

The prime minister said he had discussed the issue with President Dalia Grybauskaitė who will attend an EU summit on Wednesday. The meeting's agenda, among other things, will include discussion on the candidates for heads of EU institutions.

According to the Financial Times, the Baltic states and Poland are trying to block Mogherini's appointment for EU foreign policy chief due to her too strong pro-Russian position.

Lithuanian officials have so far not officially commented on specific candidates. Bulgaria's representative in the European Commission Kristalina Georgieva is named among potential compromise candidates.

Related articles
President Grybauskaitė does not comment if Lithuania will block Italy's candidate for EU diplomacy chief
Why Sikorski is more useful in Brussels than in Warsaw?

According to Chief Advisor to the President on Legal Affairs Rasa Svetikaitė, Lithuania wants that the EU's new diplomacy chief would be well aware of political situation in Europe and how it is changing.

"For Lithuania it is crucial that the EU's new high representative for foreign affairs would have profound knowledge of Europe's geopolitical situation and how it is changing, would evenly represent all EU (member states) and would be active. The EU itself has to be active in foreign policy, implementing the Eastern Partnership policy, enhancing cooperation with the US and expanding cooperation with NATO," Svetikaitė told the Žinių Radijas radio station.

According to the chief advisor, the main goal of the European Council is to approve Jean-Claude Juncker, former prime minister of Luxembourg and former head of the Eurogroup, as the president of the European Commission. He would replace Jose Manuel Barrosso.

On Wednesday, the European Council will discuss who could replace Catherine Ashton, High Representative of the Union for Foreign Affairs and Security Policy.

It will also be discussed who could replace President of the European Council Herman van Rompuy. The EU leaders will also talk about the situation in Ukraine.

Post to be given to a left-wing female candidate

Currently, the high representative of the European Union for Foreign Affairs and Security Policy is Catherine Ashton of Great Britain.

Asked during a press conference on Monday about Lithuania's position on the Italian candidate, President Grybauskaitė said, without giving any names, that a person in this position should "coordinate all opinions instead of giving a narrow or very controversial position, especially on Ukraine."

Estonian Foreign Minister Urmas Paet told BNS "the EU's next high representative should be a seasoned, well-connected foreign policy player who understands the security situation, risks and opportunities of the Baltic Sea region."

Lithuanian political scientist Tomas Janeliūnas says Mogherini, appointed Italy's foreign minister only this year, is being criticized for her lack of experience and likely pro-Russian stance.

"Italy, on the whole, is very often among the countries supporting Russia, the more so socialists in Italy. Their representative would most likely favour Russia," Janeliūnas, an associate professor of the Institute of International Relations and Political Science at Vilnius University, told BNS on Tuesday.

"In the short-term, the European Union will most likely not have a more important issue than Russia. Naturally, we need an exceptionally strong person who knows Russia well and is capable of withstanding pressure and Russia's manipulation," he said.

Mogherini's rise was determined by the fact that, to ensure balance, high EU positions are distributed based on criteria like a candidate's political party membership and gender. After it was agreed on the appointment of the right-wing representative Jean-Claude Juncker as the next president of the European Commission, a woman representing the left is the best candidate for the position of EU foreign policy chief.

"They are looking not into some personal characteristics or competence, but are taking a purely formal stance and say that this position should be given to leftist parties and a female representative. Some consider those to be inappropriate criteria, as if the EU elite is underestimating the importance of the high representative," Janeliūnas said.

Bulgaria's representative in the European Commission Kristalina Georgieva is named among potential compromise candidates for the position.

If EU members fail to agree, they might have to vote under a complicated qualified majority system when 352 votes are distributed among member states based on their size. 93 votes are needed to block a candidate. Lithuania has seven votes, and the Baltic states and Poland together have 42 votes.

President Dalia Grybauskaitė is of the opinion that the head of foreign diplomacy of the European...