BNS EN
aA
Russia's State Duma should set up a group for inter-parliamentary relations with Lithuania in the near future and the two countries' lawmakers should start with improving the atmosphere of bilateral relations, Russia's ambassador to Vilnius said on Monday. 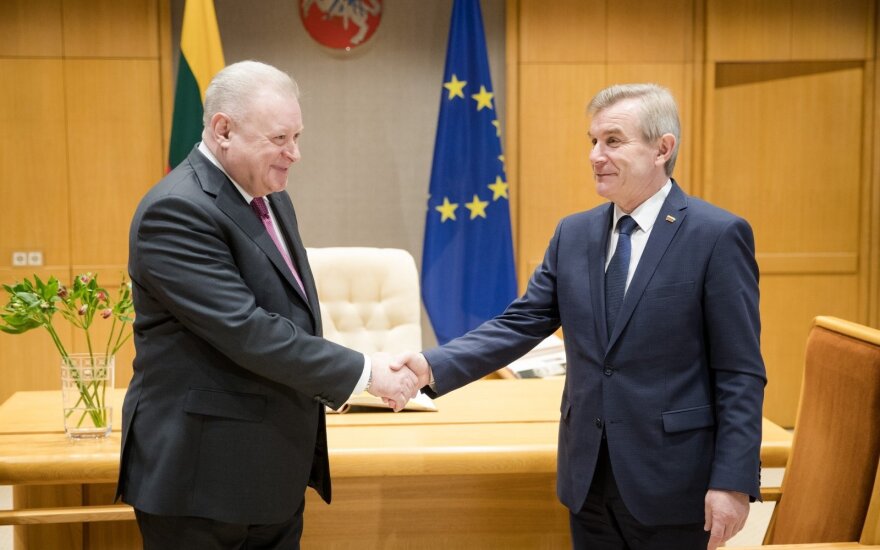 "The Seimas and the State Duma are structures that have a significant impact on the atmosphere of our relations. We all understand that these relations are not at their best now and, therefore, perhaps we should start by thinking about the atmosphere, improving it and creating more favorable conditions for mutual dialog," Alexander Udaltsov told reporters after meeting with Seimas Speaker Viktoras Pranckietis.

The ambassador said that Russia wants to have a reliable, predictable and well-wishing partner and neighbor.

"We agreed that we have a certain reserve for cooperation by our deputies. There have been no contacts between our parliaments for a long time now for obvious reasons," Udaltsov said.

"I was informed that the Group for Inter-parliamentary Relations with the Russian Federation had been established at the Seimas. We welcome the establishment of such a group. I will tell Moscow that we should expedite the establishment of an equivalent group at the State Duma and organize a meeting between our parliamentarians, which is what I believe we have agreed on," he said.

The ambassador said that such a group could be set up at the State Duma in the coming weeks or months.

Udaltsov underlined that contacts are necessary for normal relations between the states.

"People-to-people contacts and contacts among diplomats, deputies and officials would help us to better understand each other's position and find common ground," he said.

"We are concerned about the power plant that Rosatom is building close to our border. This is an issue not only of regional security," the advisor said.

Pranckietis and Udaltsov also discussed the situation in Eastern Ukraine, the implementation of the Minsk agreements and the EU's sanctions on Russia.

Vilnius City Mayor Remigijus Šimašius has pledged to take measures to prevent opening of the...