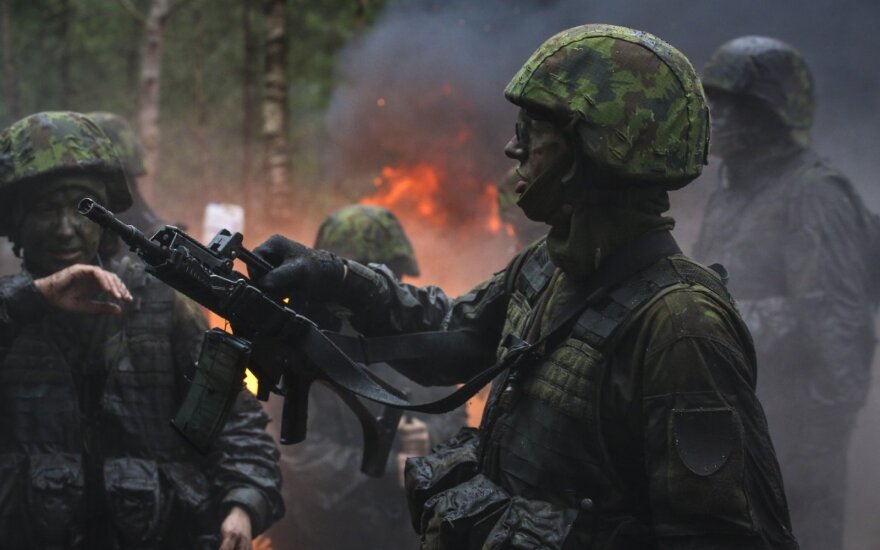 The exercise in Marijampolė and Vilkaviškis, southern Lithuania, will last until May 7, involving the Armed Forces' Peacetime Operational Forces, Response Forces and supporting units.

In addition to the troops, the training will include officers of the Police Department, the Public Security Service and the anti-terrorist operations unit Aras, the State Border Guard Service, the Fire-and-Rescue Department, as well as representatives of municipalities, hospital personnel and the Lithuanian Riflemen's Union.

A total of 3,000 troops, 200 police officers and 200 representatives of other institutions will take part in the exercise, which will involve 2,000 reserve troops from across Lithuania in the exercise on May 5.

Related articles
Saber Strike has nothing to do with any annexation plans, US general says
Saber Strike 2015 demo operation performed in Lithuania

Under the exercise scenario, unknown armed groups will cause disturbances and riots in cities at an attempt to take over local administrative units.

"We plan to simulate various actions: non-conventional, actions of hybrid war, terrorist attacks against local government institutions and citizens. (…) Unidentified groups will attempt causing disturbances and riots by taking over buildings of local government institutions," Major General Vitalijus Vaiksnoras, chief of the army's Joint Staff who will command the exercise.

The scenario of the exercise, which is held for the third time, has been develop to train, check and assess how fast and effectively interior institutions can rally the Lithuanian Army's Peacetime Operations Forces and Response Forces with the goal of neutralizing armed groups, at the same time providing maximum protection of civilians and their property.

Saber Strike has nothing to do with any annexation plans, US general says

The Saber Strike 2015 exercise held in the Baltic states by NATO has nothing to do with the...

A demo military operation was performed in the Gaižiūnai training ground, central Lithuania, on...

Some 1,500 NATO troops to train to defend Suwalki gap this summer

Around 1,500 NATO troops this summer will train to defend the so-called " Suwalki gap ", a land...