(2)
BNS
aA
Lithuania is spending less and less time and effort on strategic decisions and the state is losing its strategic direction, President Dalia Grybauskaitė said in her annual state of the nation address on Thursday. 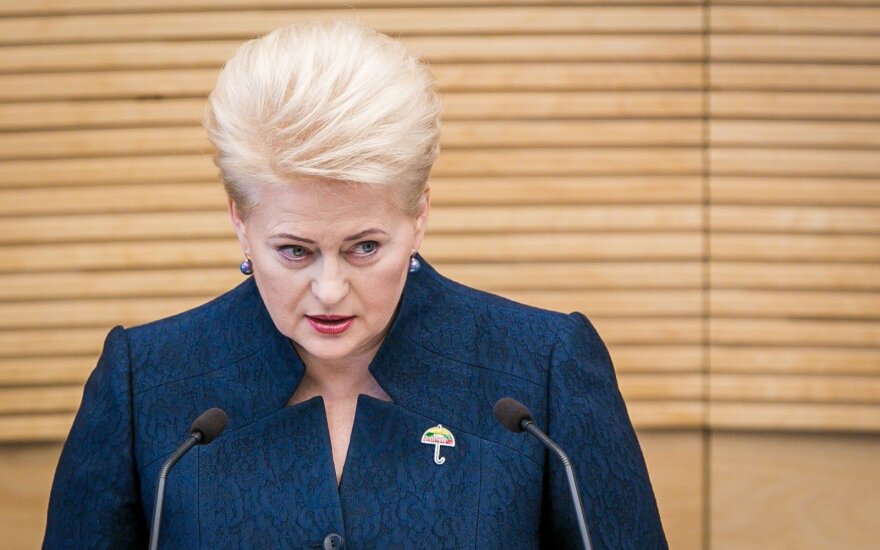 "The European Commission, too, regards Lithuania's progress in the past years as limited. The state is losing its strategic direction - in many areas we are going round and round, stuck in the same routine," the president said in her annual State of the Nation Address to the Seimas.

"Less and less time and energy is devoted to Lithuania's future, to strategic decisions and effective structural reforms," Grybauskaitė said.

"Addiction to nomenklatura privileges is not letting us go. Entangled in the mire of corruption, we are losing the ability to think and act in the spirit of statesmanship," she said.

The president warned that "the moment of economic stability - which can produce a qualitative leap in the development of the state - may be lost if we fail to notice troubling signs".

She called for an open discussion about the quality of state governance and the future path of the state.

Under the Lithuanian Constitution, the president delivers the State of the Nation Address on the situation in the country and its domestic and foreign policies to the Seimas every year.

It is Grybauskaitė's seventh annual address to the parliament. She was elected as president in May 2009 and re-elected for a second five-year term in June 2014.

Integration into EU and nato 'more important than ever'

President Grybauskaitė expects that the next government will maintain the direction of anchoring the country in the European Union and NATO, which is now more important than ever.

"Populist voices that spread disappointment in Euro-Atlantic integration and raise doubts about our common European future, and calls to befriend an aggressor are no less dangerous than the fighter planes of an unfriendly country in our skies," Grybauskaitė said.

"It is now more important than ever to maintain the direction of anchoring ourselves in the European Union and NATO. That is what I expect from the next government," she said.

Grybauskaitė called for a broader approach to security threats and said that the country must be able to adapt its national decisions to the changing situation.

"We need to be sure that in case of crisis, the state is prepared to respond in a flash and protect the security of people," she said.

The president noted that even in the wake of the bloody attacks in Paris and Brussels, counter-terrorism measures are only being projected for the future, with a law on crisis management sill stuck in discussions and no decisions taken on the establishment of a crisis management centre.

Speaking about security, Grybauskaite also welcomed NATO allies' support to Lithuania, which has intensified after Russia's actions in Ukraine.

"Our concerns were heard by NATO allies in Wales, Berlin and Washington, and we believe that they will receive understanding in Warsaw too. Allied headquarters in Vilnius, Germany’s decision to contribute to the formation of a forward battalion in Lithuania, the presence of rotational U.S. forces – these are additional guarantees for the security of us all," she said.

The president underlined that "the first military volunteers who enlisted to serve the Republic of Lithuania with full allegiance and dedication are a clear manifestation of strong commitment to the state".

The Lithuanian media defended the freedom of speech amid attempts to block public access to information from closed court hearings, President Grybauskaitė noted.

"The fourth estate stood up in solidarity against the attempts to silence the media and defended the freedom of speech," she said in her annual State of the Nation Address to the Seimas, referring to amendments to the Criminal Code that would have criminalized disclosure of information from closed court hearings.

After an outcry from the media, the president vetoed the amendments and the parliament upheld the veto.

Grybauskaite noted, however, that "after political parties have been banned from directly owning and controlling media outlets, loopholes are found to manipulate information".

"Critical thinking and information literacy are developed by the civilly active Facebook generation. If one person's call not to be afraid gathered tens of thousands of people for a freedom picnic, what a powerful voice we could be – being not afraid to speak out," she said.

Lithuania 'turning away from corruption'

The president also noted in her annual address that Lithuania's political system is cleansing itself of corruption, power privileges and influence peddling.

According to the president, ongoing law-enforcement investigations into political corruption are "part of a consistent process of cleansing from corruption and oligarchic self-will".

"We are doing the right thing when turning decisively away from the disreputable practices popularly known as the ‘Vijūnėlė estate’, ‘buy an elephant’ or ‘in-laws and relations’ where self-interests are more important than national interests, where nomenklatura privileges are a supplement to the office, but not a sign of corruption, where errands are assigned by phone to judges and editors, and where trading in influence is a daily routine," Grybauskaitė said.

"(...) nostalgia for the former party funding regime, attempts to delete 'trading in influence' from the Penal Code demonstrate that the political system does not want to release its grip on old habits. We see that the law enforcement is working hard to deal with such 'traders', especially now," she said.

Law-enforcement bodies are currently conducting pre-trial investigations into corruption suspicions involving the Order and Justice Party and its chairman Rolandas Paksas, Eligijus Masiulis, a former chairman of the Liberal Movement, and Vytautas Gapšys, one of the leaders of the Labour Party.